Die Another Day: Inhibition of Cell Death Pathways by Cytomegalovirus

RNA silencing has an important role in defending against virus infection in plants. Plants with the deficiency of RNA silencing components often show enhanced susceptibility to viral infections. RNA-dependent RNA polymerase (RDRs) mediated-antiviral defense has a pivotal role in resistance to many plant viruses. In RDR6-mediated defense against viral infection, a plant-specific RNA binding protein, Suppressor of Gene Silencing 3 (SGS3), was also found to fight against some viruses in Arabidopsis. In this study, we showed that SGS3 from Nicotiana benthamiana (NbSGS3) is required for sense-RNA induced post-transcriptional gene silencing (S-PTGS) and initiating sense-RNA-triggered systemic silencing. Further, the deficiency of NbSGS3 inhibited geminivirus-induced endogenous gene silencing (GIEGS) and promoted geminivirus infection. During TRV-mediated NbSGS3 or N. benthamiana RDR6 (NbRDR6) silencing process, we found that their expression can be effectively fine-tuned. Plants with the knock-down of both NbSGS3 and NbRDR6 almost totally blocked GIEGS, and were more susceptible to geminivirus infection. These data suggest that NbSGS3 cooperates with NbRDR6 against GIEGS and geminivirus infection in N. benthamiana, which provides valuable information for breeding geminivirus-resistant plants. View Full-Text
Keywords: RNA silencing; geminivirus; RDR6; SGS3; resistance RNA silencing; geminivirus; RDR6; SGS3; resistance
►▼ Show Figures 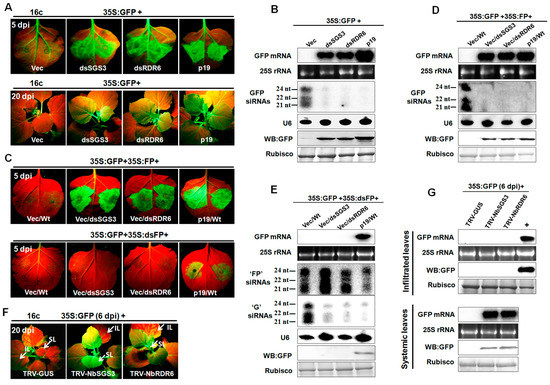