Salcaprozate sodium (SNAC) and sodium caprate (C10) are two of the most advanced intestinal permeation enhancers (PEs) that have been tested in clinical trials for oral delivery of macromolecules. Their effects on intestinal epithelia were studied for over 30 years, yet there is still debate over their mechanisms of action. C10 acts via openings of epithelial tight junctions and/or membrane perturbation, while for decades SNAC was thought to increase passive transcellular permeation across small intestinal epithelia based on increased lipophilicity arising from non-covalent macromolecule complexation. More recently, an additional mechanism for SNAC associated with a pH-elevating, monomer-inducing, and pepsin-inhibiting effect in the stomach for oral delivery of semaglutide was advocated. Comparing the two surfactants, we found equivocal evidence for discrete mechanisms at the level of epithelial interactions in the small intestine, especially at the high doses used in vivo. Evidence that one agent is more efficacious compared to the other is not convincing, with tablets containing these PEs inducing single-digit highly variable increases in oral bioavailability of payloads in human trials, although this may be adequate for potent macromolecules. Regarding safety, SNAC has generally regarded as safe (GRAS) status and is Food and Drug Administration (FDA)-approved as a medical food (Eligen®-Vitamin B12, Emisphere, Roseland, NJ, USA), whereas C10 has a long history of use in man, and has food additive status. Evidence for co-absorption of microorganisms in the presence of either SNAC or C10 has not emerged from clinical trials to date, and long-term effects from repeat dosing beyond six months have yet to be assessed. Since there are no obvious scientific reasons to prefer SNAC over C10 in orally delivering a poorly permeable macromolecule, then formulation, manufacturing, and commercial considerations are the key drivers in decision-making. View Full-Text
Keywords: oral macromolecule delivery; oral peptides; sodium caprate; salcaprozate sodium; epithelial permeability; epithelial transport oral macromolecule delivery; oral peptides; sodium caprate; salcaprozate sodium; epithelial permeability; epithelial transport
►▼ Show Figures 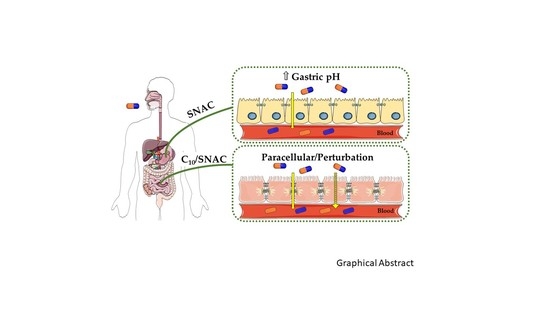