Nanoemulsion is one of the potential drug delivery strategies used in topical ocular therapy. The purpose of this study was to design and optimize a nanoemulsion-based system to improve therapeutic efficacy of moxifloxacin in ophthalmic delivery. Moxifloxacin nanoemulsions were prepared by testing their solubility in oil, surfactants, and cosurfactants. A pseudoternary phase diagram was constructed by titration technique and nanoemulsions were obtained with four component mixtures of Tween 80, Soluphor® P, ethyl oleate and water. An experiment with simplex lattice design was conducted to assess the influence of formulation parameters in seven nanoemulsion formulations (MM1–MM7) containing moxifloxacin. Physicochemical characteristics and in vitro release of MM1–MM7 were examined and optimized formulation (MM3) was further evaluated for ex vivo permeation, antimicrobial activity, ocular irritation and stability. Drug pharmacokinetics in rabbit aqueous humor was assessed for MM3 and compared with conventional commercial eye drop formulation (control). MM3 exhibited complete drug release in 3 h by Higuchi diffusion controlled mechanism. Corneal steady state flux of MM3 (~32.01 µg/cm2/h) and control (~31.53 µg/cm2/h) were comparable. Ocular irritation study indicated good tolerance of MM3 and its safety for ophthalmic use. No significant changes were observed in the physicochemical properties of MM3 when stored in the refrigerator for 3 months. The greater aqueous humor concentration (Cmax; 555.73 ± 133.34 ng/mL) and delayed Tmax value (2 h) observed in MM3 suggest a reduced dosing frequency and increased therapeutic efficacy relative to control. The area under the aqueous humor concentration versus time curve (AUC0–8 h) of MM3 (1859.76 ± 424.51 ng·h/mL) was ~2 fold higher (p < 0.0005) than the control, suggesting a significant improvement in aqueous humor bioavailability. Our findings suggest that optimized nanoemulsion (MM3) enhanced the therapeutic effect of moxifloxacin and can therefore be used as a safe and effective delivery vehicle for ophthalmic therapy. View Full-Text
Keywords: nanoemulsion; mixture design; aqueous humor; antimicrobial activity nanoemulsion; mixture design; aqueous humor; antimicrobial activity
►▼ Show Figures 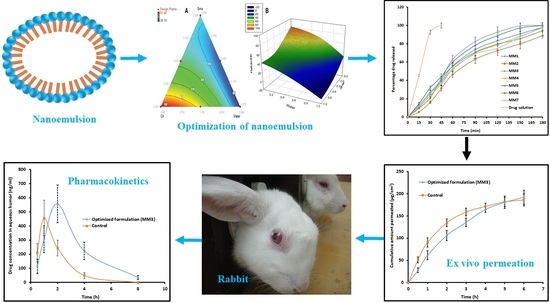