Modifications in Vaginal Microbiota and Their Influence on Drug Release: Challenges and Opportunities

Sub-Saharan African women are still at risk from the human immunodeficiency virus (HIV), and sex with men is the main route of transmission. Vaginal formulations containing antiretroviral drugs are promising tools to give women the power to protect themselves. The aim of this work was to obtain freeze-dried bigels containing pectin, chitosan, or hypromellose for the vaginal controlled release of Tenofovir, which is accelerated in the presence of semen. Nine batches of bigels were formulated using different proportions of these polymers in the hydrogel (1, 2, and 3% w/w). The bigels obtained were freeze-dried and then underwent hardness and deformability, mucoadhesion, swelling, and drug release tests, the last two in simulated vaginal fluid (SVF) and SVF/simulated seminal fluid (SSF) mixture. The formulation containing 3% pectin (fd3P) has the highest values for hardness, resistance to deformation, and good mucoadhesivity. Its swelling is conditioned by the pH of the medium, which is responsive to the controlled release of Tenofovir in SVF, with the fastest release in the SVF/SSF mixture. fd3P would be an interesting smart microbicidal system to allow faster release of Tenofovir in the presence of semen, and thus increase women’s ability to protect themselves from the sexual transmission of HIV. View Full-Text
Keywords: vaginal microbicides; controlled release of Tenofovir; pectin; chitosan; HPMC; mucoadhesive freeze-dried bigels; pH-sensitive systems vaginal microbicides; controlled release of Tenofovir; pectin; chitosan; HPMC; mucoadhesive freeze-dried bigels; pH-sensitive systems
►▼ Show Figures 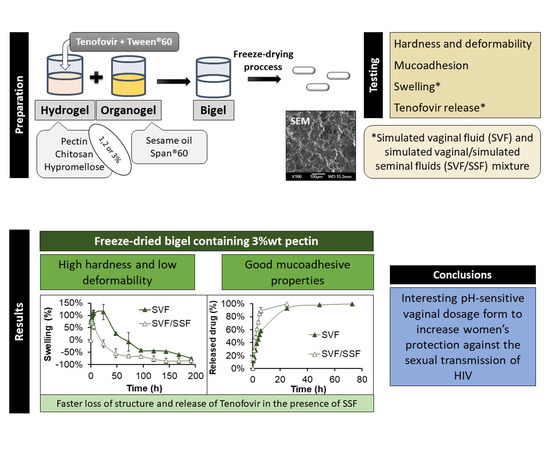 Martín-Illana, A.; Notario-Pérez, F.; Cazorla-Luna, R.; Ruiz-Caro, R.; Veiga, M.D. Smart Freeze-Dried Bigels for the Prevention of the Sexual Transmission of HIV by Accelerating the Vaginal Release of Tenofovir during Intercourse. Pharmaceutics 2019, 11, 232. https://0-doi-org.brum.beds.ac.uk/10.3390/pharmaceutics11050232


Martín-Illana A, Notario-Pérez F, Cazorla-Luna R, Ruiz-Caro R, Veiga MD. Smart Freeze-Dried Bigels for the Prevention of the Sexual Transmission of HIV by Accelerating the Vaginal Release of Tenofovir during Intercourse. Pharmaceutics. 2019; 11(5):232. https://0-doi-org.brum.beds.ac.uk/10.3390/pharmaceutics11050232


Martín-Illana, Araceli, Fernando Notario-Pérez, Raúl Cazorla-Luna, Roberto Ruiz-Caro, and María D. Veiga 2019. "Smart Freeze-Dried Bigels for the Prevention of the Sexual Transmission of HIV by Accelerating the Vaginal Release of Tenofovir during Intercourse" Pharmaceutics 11, no. 5: 232. https://0-doi-org.brum.beds.ac.uk/10.3390/pharmaceutics11050232