Ucuùba fat is fat obtained from a plant found in South America, mainly in Amazonian Brazil. Due to its biocompatibility and bioactivity, Ucuùba fat was used for the production of ketoconazole-loaded nanostructured lipid carriers (NLC) in view of an application for the treatment of onychomycosis and other persistent fungal infections. The development and optimization of Ucuùba fat-based NLC were performed using a Box-Behnken design of experiments. The independent variables were surfactant concentration (% w/v), liquid lipids concentration (% w/v), solid lipids concentration (% w/v), while the outputs of interest were particle size, polydispersity index (PDI) and drug encapsulation efficiency (EE). Ucuùba fat-based NLC were produced and the process was optimized by the development of a predictive mathematical model. Applying the model, two formulations with pre-determined particle size, i.e., 30 and 85 nm, were produced for further evaluation. The optimized formulations were characterized and showed particle size in agreement to the predicted value, i.e., 33.6 nm and 74.6 nm, respectively. The optimized formulations were also characterized using multiple techniques in order to investigate the solid state of drug and excipients (DSC and XRD), particle morphology (TEM), drug release and interactions between the formulation components (FTIR). Furthermore, particle size, surface charge and drug loading efficiency of the formulations were studied during a one-month stability study and did not show evidence of significant modification. View Full-Text
Keywords: Amazonian fat; Ucuùba fat; Box Behnken Design; solid lipid nanoparticles; antifungal therapy; onychomycosis Amazonian fat; Ucuùba fat; Box Behnken Design; solid lipid nanoparticles; antifungal therapy; onychomycosis
►▼ Show Figures 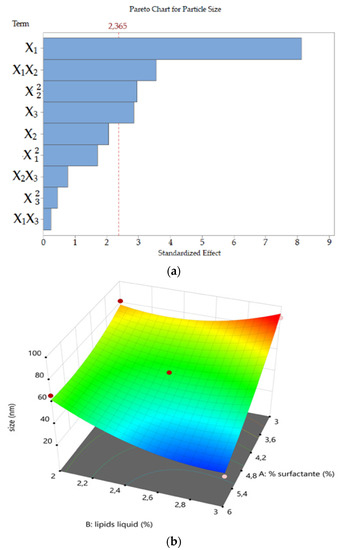