Bioequivalence of Oral Drug Products in the Healthy and Special Populations: Assessment and Prediction Using a Newly Developed In Vitro System “BE Checker”

In order to assess and predict the bioequivalence (BE) of oral drug products, a new in vitro system “BE checker” was developed, which reproduced the environmental changes in the gastrointestinal (GI) tract by changing the pH, composition, and volume of the medium in a single chamber. The dissolution and membrane permeation profiles of drugs from marketed products were observed in the BE checker under various conditions reflecting the inter-patient variations of the GI physiology. As variable factors, initial gastric pH, gastric emptying time, and GI agitation strength were varied in vitro. Dipyridamole, a basic drug, showed rapid and supersaturated dissolution when the paddle speed in the donor chamber was 200 rpm, which corresponds to the high agitation strength in the stomach. In contrast, supersaturated dissolution disappeared, and the permeated amount decreased under the conditions with a slow paddle speed (100 and 50 rpm) and short gastric emptying time (10 min). In those conditions, disintegration of the formulation was delayed, and the subsequent dissolution of dipyridamole was not completed before the fluid pH was changed to neutral. Similar results were obtained when the initial gastric pH was increased to 3.0, 5.0, and 6.5. To investigate that those factors also affect the BE of oral drug products, dissolution and permeation of naftopidil from its ordinary and orally disintegrating (OD) tablets were observed in the BE checker. Both products showed the similar dissolution profiles when the paddle speed and gastric emptying time were set to 100 rpm and 10 or 20 min, respectively. However, at a low paddle speed (50 rpm), the dissolution of naftopidil from ordinary tablets was slower than that from the OD tablets, and the permeation profiles became dissimilar. These results indicated the possibility of the bioinequivalence of some oral formulations in special patients whose GI physiologies are different from those in the healthy subjects. The BE checker can be a highly capable in vitro tool to assess the BE of oral drug products in various populations. View Full-Text
Keywords: oral drug product; bioequivalence; special population; gastrointestinal physiology; dissolution; permeation; gastric emptying oral drug product; bioequivalence; special population; gastrointestinal physiology; dissolution; permeation; gastric emptying
►▼ Show Figures 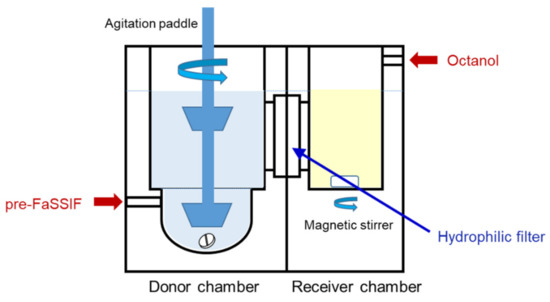