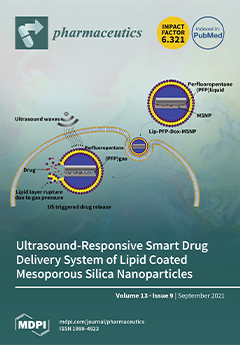 Cover Story (view full-size image): Among the emerging strategies in the treatment of cancer, stimuli-responsive smart drug delivery systems have attracted attention because of the efficient delivery of the payload at the target site without harming the healthy tissues and simultaneously coping with chemoresistance due to subtherapeutic drug exposures. Apart from their salient features, liposomes and mesoporous silica nanoparticles individually exhibit certain drawbacks, but a combined approach ends up being a success. The gatekeeping effect of lipid coat not only plays an important role in the stability of nanocarriers but also enhances the cellular uptake. Ultrasound responsive conversion of liquid to gas result in lipid layer rupture and ultimately triggers drug release from porous structures. View this paper.
Previous Issue
Volume 13, August
Next Issue
Volume 13, October
We use cookies on our website to ensure you get the best experience. Read more about our cookies here.
Accept
We have just recently launched a new version of our website. Help us to further improve by taking part in this short 5 minute survey here. here.
Never show this again