Surgical Techniques for Rectal Prolapse
Next Article in Special Issue

Neuropathic Pain in Pancreatic Cancer: An Update of the Last Five Years

Pain is the main symptom of pancreatic cancer (pancreatic ductal adenocarcinoma, PDAC). Pain in pancreatic cancer may be visceral, somatic or neuropathic in origin. Pain is produced by tissue damage, inflammation, ductal obstruction and infiltration. Visceral nociceptive signals caused by damage to the upper abdominal viscera are carried along sympathetic fibers, which travel to the celiac plexus nerves and ganglia, which are found at the T12-L2 vertebral levels, anterolateral to the aorta near the celiac trunk. From here, the signals are transmitted through the splanchnic nerves to the T5-T12 dorsal root ganglia and then on to the higher centers of the central nervous system. Somatic and neuropathic pain may arise from tumor extension into the surrounding peritoneum, retroperitoneum and bones and, in the latter case, into the nerves, such as the lumbosacral plexus. It should also be noted that other types of pain might arise because of therapeutic interventions, such as post-chemoradiation syndromes, which cause mucositis and enteritis. Management with non-steroidal anti-inflammatory agents and narcotics was the mainstay of therapy. In recent years, celiac plexus blocks and neurolysis, as well as intrathecal therapies have been used to control severe pain, at times resulting in a decreased need for drugs, avoiding their unwanted side effects. Pain may impair the patient’s quality of life, negatively affecting patient outcome and resulting in increased psychological stress. Even after recognizing the negative effect of cancer pain on patient overall health, studies have shown that cancer pain is still undertreated. This review focuses on neuropathic pain, which is difficult to handle; thus, the most recent literature was reviewed in order to diagnose neuropathic pain and its management. View Full-Text
Keywords: pancreatic neoplasms; pain management; visceral pain; nociceptive pain; systematic review pancreatic neoplasms; pain management; visceral pain; nociceptive pain; systematic review
►▼ Show Figures 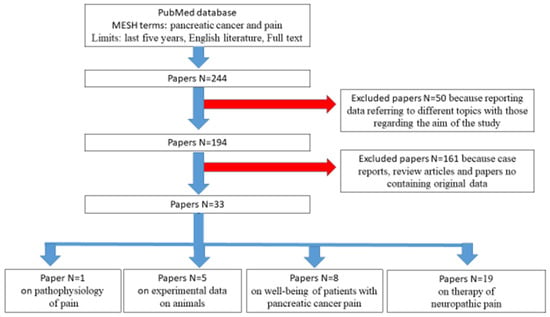 Raffaele Pezzilli
Raffaele Pezzilli is Chief of the Pancreas Unit at Sant'Orsola-Malpighi University Hospital, Bologna, Italy. He completed his MD degree at the University of Bologna in 1983. He specialized in Internal Medicine in 1988 and in Gastroenterology and Digestive Endoscopy in 1992 at the at University of Bologna. He was also the Assistant Professor of the Medicine Department of Internal Medicine Gastroenterology, University of Bologna, Italy. He is serving as an editorial board member of reputed journals and as a reviewer of more than 50 journals. He has authored or co-authored 450 publications in peer-reviewed journals and 125 book chapters.
Zoom | Orient | As Lines | As Sticks | As Cartoon | As Surface | Previous Scene | Next Scene
We use cookies on our website to ensure you get the best experience. Read more about our cookies here.
Accept
We have just recently launched a new version of our website. Help us to further improve by taking part in this short 5 minute survey here. here.
Never show this again