The Deleterious Effects of COVID-19 in the Peripartum Period: A Case Report
Previous Article in Journal

Children are commonly grouped by chronological age in various fields, including education, with the purpose of providing fair opportunities and ensuring an adequate and uniform educational process [1]. The grouping of children and adolescents by chronological age, however, still produces a mix of older and younger individuals. The enrollment of children into school grades by birth date, for example, results in an age difference of up to 12-months within a single grade. This difference in chronological age between subjects within a specific age group is referred to as relative age difference [2,3]. Given the differences in maturation and development along with the interaction of genetic factors and experience, the relative age difference can provide advantages and disadvantages for an individual in school and sports performance [4,5]. The potential consequences in specific contexts or domains due to differences in birth date within a given age group are referred to as relative age effect (RAE) [3,4].
The RAE has been initially documented in the context of education [6,7,8] but is also well-established in competitive sports [4,9]. Performance differences have been commonly attributed to biological maturation in addition to social, pedagogic and behavioral aspects, as well as the opportunity to engage in extra practice time [10,11,12,13]. Veldhuizen et al., therefore, argue that the RAE is a result of a natural and straightforward relationship between age and performance, because cognitive, behavioral, motor, social and emotional development follow age [13]. Accordingly, a RAE can be expected in circumstances of strict selection procedures, which are common in sports and education [13]. This is also consistent with available research that showed poorer academic performance [1,14,15,16] and worse physical fitness [13,17,18] in children who are born late within a given cohort. Children born early in their cohort, on the other hand, generally enjoy an advantage over their peers and are often considered more talented, which results in a higher representation in sports at school and club level [19,20,21,22]. Similarly, early-born children are more likely to be enrolled in advanced academic programs [16,23]. Relatively older children have also been shown to perform better in physical education (PE) than their younger peers, which was reflected by differences in PE grades [2,24,25,26]. Taken together, the RAE has been observed in explicitly and implicitly competitive situations when participants are stratified by chronological age.
While it can be expected that the RAE disappears as children grow and ultimately reach maturity, there can still be secondary effects. Children born early in a selection year are more likely to have positive experiences, which will result in a higher perceived competence [27]. These children are also more likely to continue with their participation in sports and the additional experiences will further enhance their abilities [28]. As children born early in the year may be perceived as more talented, they may also be given more and better training opportunities [23,29], which will further contribute to enhanced development compared to their non-selected peers. The initial selection, therefore, becomes self-fulfilling, which is known as Pygmalion effect [30]. Relatively younger children, on the other hand, have been shown to display lower self-esteem and greater health problems [31,32]. These children are also more commonly diagnosed with learning difficulties and behavioral problems [33]. Given the importance of physical fitness for general health and development in children, along with its critical role in the promotion of an active lifestyle [34,35,36,37,38], all children should be given equal opportunities to enhance their physical fitness.
Even though the RAE has been shown consistently in education and sport, it is not entirely understood at this time that it is also present in non-selective settings [39]. Further, differences in physical fitness remained after controlling for somatic maturation [17]. Additional research, therefore, is necessary, particularly in less competitive settings, such as PE, in order to reduce the potential discrimination of relatively younger children. The majority of studies also examined adolescents, and there remains limited information on the RAE in children. The present study, therefore, examines differences in physical fitness across birth-quartiles with a 12-month timespan during the elementary-school years.

The study population consisted of 18,168 children between 6 and 11 years of age (mean age: 8.4 ± 0.8 years) that participated in a state-wide, school-based physical fitness assessment, which has been described in detail elsewhere [40]. The study procedures were in accordance with the 2008 declaration of Helsinki and the study protocol has been approved by the Upper Austrian school board as well as the participating schools. Parents provided written consent prior to data collection, and children provided oral assent at the time of measurement.
All measurements were conducted during regular school time in the participating school’s gymnasium by trained personnel. Body weight (kg) and height (cm) were measured according to standard procedures with children wearing sports clothes and being barefoot. Specifically, body weight was measured with an electronic scale (Seca 878 dr, Seca, Hamburg, Germany) to the nearest 0.1 kg, and height was measured with a portable stadiometer (SECA 2013, Seca, Hamburg, Germany) to the nearest 0.5 cm. Body mass index (BMI) was calculated (kg/m2) and converted to BMI percentiles (BMIPCT) based on German reference values with the 90th percentile as cutpoint for overweight/obesity [41].
Upon completion of anthropometric measurements, participants completed 8 physical fitness tests that assessed cardiorespiratory endurance, muscular strength and power, speed, agility, flexibility and object control. Cardiorespiratory fitness was assessed via the distance covered during a 6 min run. Muscular strength and power were assessed with a medicine ball push and standing vertical jump. Speed was assessed with a 10 m sprint and a 6 s tapping test. A standardized obstacle course that required a forward roll as well as jumping over and crawling under obstacles, along with directional changes, was used to assess agility. Flexibility was assessed with a stand-and-reach test, and object control was assessed with a throw-and-catch test using a European handball, size 1. Participants had two attempts per test, except for tapping (3 attempts) and the 6 min run (1 attempt), with sufficient recovery time between attempts. The best attempts were used for further analyses. Fitness tests were administered in random order, except for the 6-min run, which was completed at the end of the testing session. Total time for the assessments per participant was between 90 and 120 min.
As tests were administered throughout the school year, chronological age was used (calculated as test date—birthdate) rather than school grade, and participants were grouped into one-year age groups (6.00–6.99 years, 7.00–7.99 years, … 10.00–10.99 years). Within each age group, age-specific quartiles were established based on the decimal value of the chronological age (Quartile 1: 0.00–0.24; Quartile 2: 0.25–0.49; Quartile 3: 0.50–0.74; Quartile 4: 0.75–0.99). Children in quartile 1, therefore, were the youngest participants, and children in quartile 4 were the oldest participants within each age group.
Statistical analysis. Descriptive statistics were calculated, and data were checked for normal distribution. Means with standard deviation are reported for interval-scaled data, and nominal and ordinal data are reported as prevalence. In order to examine the RAE in physical fitness in elementary school children, a 5 (age group) × 4 (age-specific quartile) MANCOVA, adjusted for sex, was conducted across the entire sample. In addition, sex-specific 5 × 4 MANOVAs were used to examine potential differences in the RAE between boys and girls. In order to account for the influence of body weight on physical fitness, additional analyses included BMIPCT as covariate. All analyses were performed in SPSS V26.0 software (SPSS Inc., IBM Corp Armonk, New York, NY, USA) with a significance level of alpha < 0.05.

The potential benefits of such alterations in PE programs, however, cannot be examined by the present study due to its cross-sectional nature. It should also be considered that there was no additional data on correlates of physical fitness, such as participation in sports, leisure time PA and socio-economic background, as well as biological maturation. Potential differences in motivation may also have influenced individual performance during the fitness tests. The large sample size, along with the administration of multiple assessments by trained personnel that cover various aspects of physical fitness, on the other hand, is a considerable strength of this study, which provides plausible evidence of a RAE in Austrian elementary-school children.

The available evidence shows that a RAE is commonly observed when participants are grouped according to chronological age even though biological maturation and anthropometric development, as well as experience and practice opportunities, vary considerably with age. Despite these differences, every child should be given opportunities to engage successfully in PA and sports without discrimination [56]. Given the wealth of descriptive research on long-term consequences of the RAE, continued efforts to reduce biases due to RAE in various settings, including PE and sports, are warranted. Schools, for example, can reconsider their approach in teaching and evaluating students’ performance, as well as their approach to selection and provision for school sports. Similarly, coaches need to consider that relatively younger children may have the same potential for high performance at a later stage when evaluating their performance [25]. All children should be given opportunities to enhance their physical fitness and enjoy participation in various forms of PA, independent of their current abilities, in order to facilitate an active and healthy lifestyle beyond childhood and adolescence.

The project “Wie fit bist du” was funded by the State of Upper Austria via “Sportland Oberösterreich”.

The study was conducted according to the guidelines of the Declaration of Helsinki and approved by the Upper Austrian School Board.

Written informed consent was obtained from the participants’ legal guardian prior to the study, and all participants provided oral assent at the time of data collection.

The raw data supporting the conclusions of this article will be made available by the authors, without undue reservation. 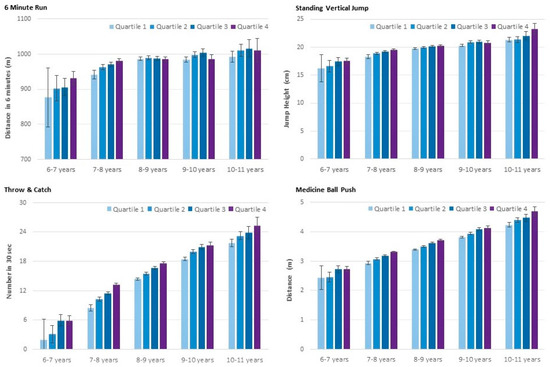 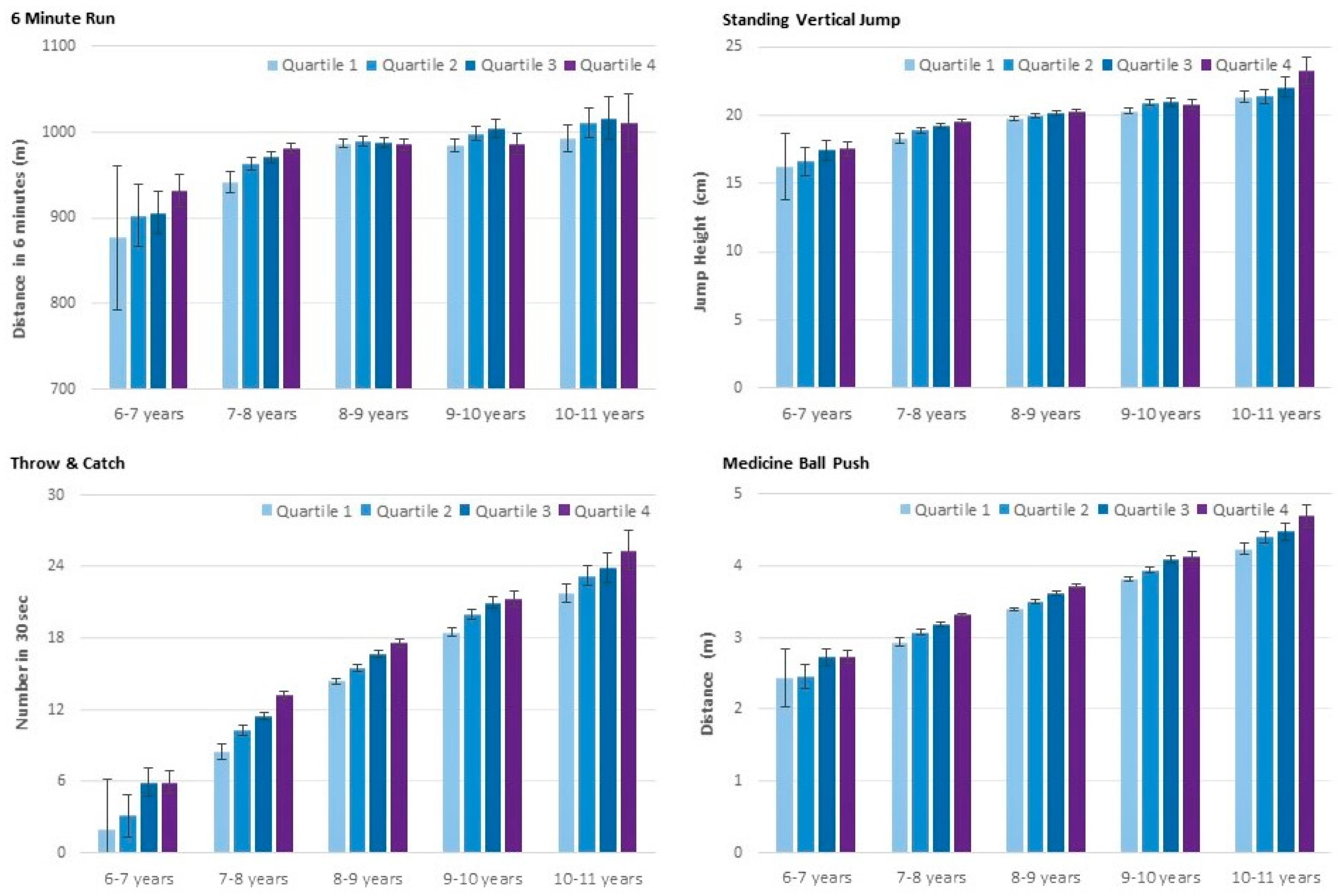 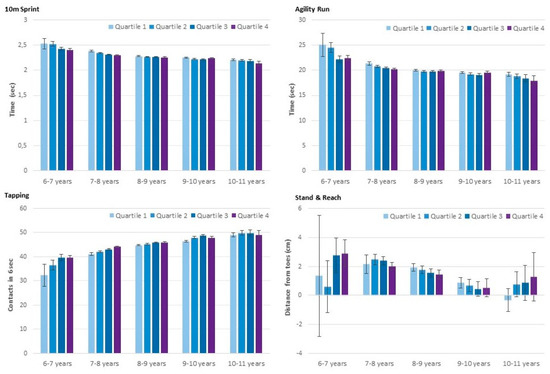 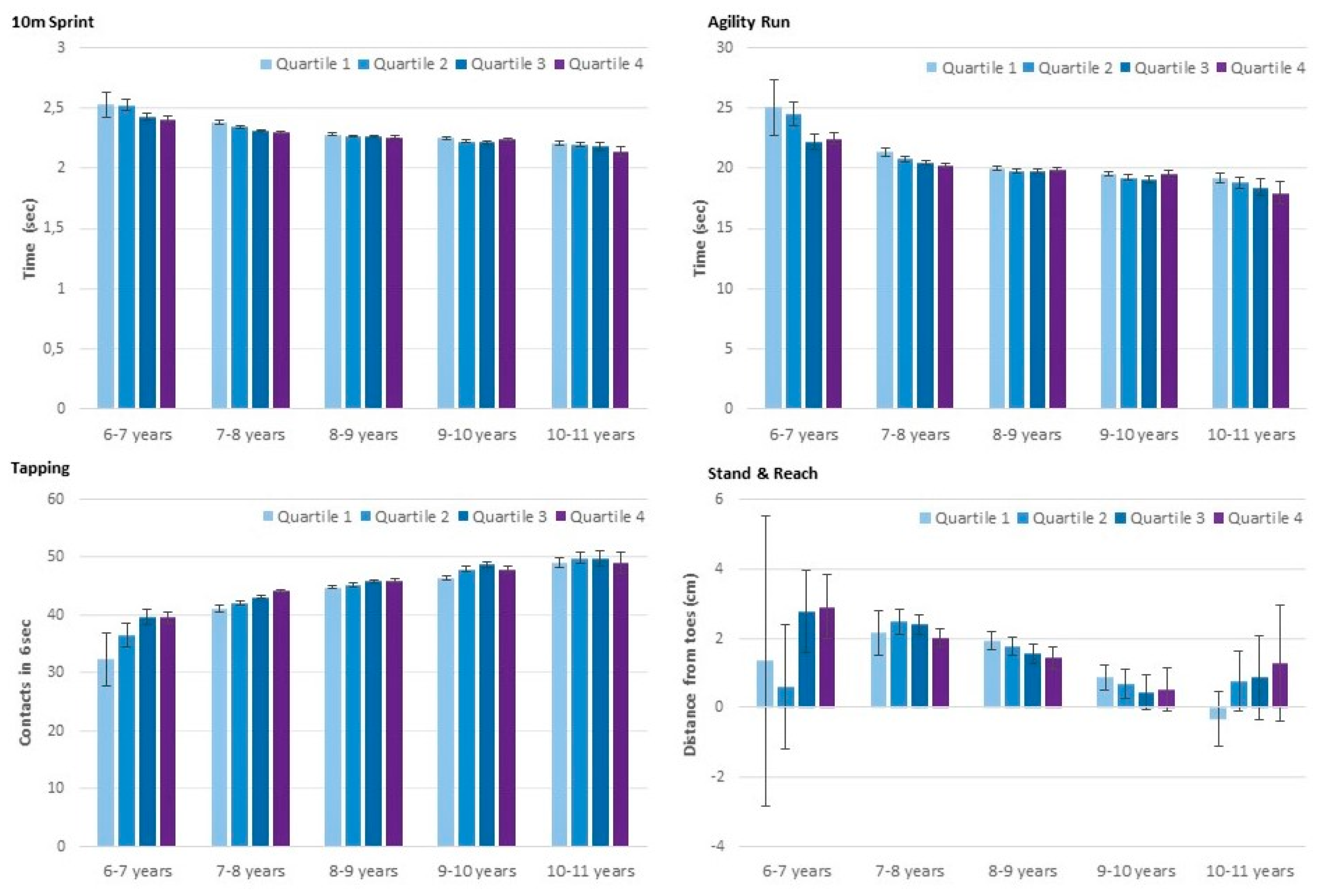