Restoration of an Active MV Distribution Grid with a Battery ESS: A Real Case Study
Next Article in Special Issue

The Water Implications of Greenhouse Gas Mitigation: Effects on Land Use, Land Use Change, and Forestry
Previous Article in Journal

The integration of hydrology and climate is important for understanding the present and future impact of climate on streamflow, which may cause frequent flooding, droughts, and shortage of water supply. In view of this, we assessed the impact of climate change on daily streamflow duration curves as well as extreme peak and low flow values. The objectives were to assess how climate change impacts watershed-wide streamflow and its extreme values and to provide an overview of the impacts of different climate change scenarios (Representative Concentration Pathways (RCP) 4.5 and 8.5) on streamflow and hydrological extremes when compared with the baseline values. We used the Soil and Water Assessment Tool (SWAT) model for daily streamflow and its extreme value modeling of two watersheds located on the Island of Oahu (Hawaii). Following successful calibration and validation of SWAT at three USGS flow gauging stations, we simulated the impact of climate change by the 2050s (2041–2070) and the 2080s (2071–2100). We used climate change perturbation factors and applied the factors to the historical time series data of 1980–2014. SWAT adequately reproduced observed daily streamflow with Nash-Sutcliffe Efficiency (NSE) values of greater than 0.5 and bracketed >80% of observed streamflow data at 95% model prediction uncertainty at all flow gauging stations, indicating the applicability of the model for future daily streamflow prediction. We found that while the considered climate change scenarios generally show considerable negative impacts on daily streamflow and its extreme values, the extreme peak flows are expected to increase by as much as 22% especially under the RCP 8.5 scenario. However, a consistent decrease in extreme low flows by as much as 60% compared to the baseline values is projected. Larger negative changes of low flows are expected in the upstream part of the watersheds where higher groundwater contributions are expected. Consequently, severe problems, such as frequent hydrological droughts (groundwater scarcity), reduction in agricultural crop productivity, and increase in drinking water demand, are significantly expected on Oahu. Furthermore, the extreme values are more sensitive to rainfall change in comparison to temperature and solar radiation changes. Overall, findings generally indicated that climate change impacts will be amplified by the end of this century and may cause earlier occurrence of hydrological droughts when compared to the current hydrological regime, suggesting water resources managers, ecosystem conservationists, and ecologists to implement mitigation measures to climate change in Hawaii and similar Islands. View Full-Text
Keywords: climate change; extreme streamflow; Hawaii; streamflow; SWAT climate change; extreme streamflow; Hawaii; streamflow; SWAT
►▼ Show Figures 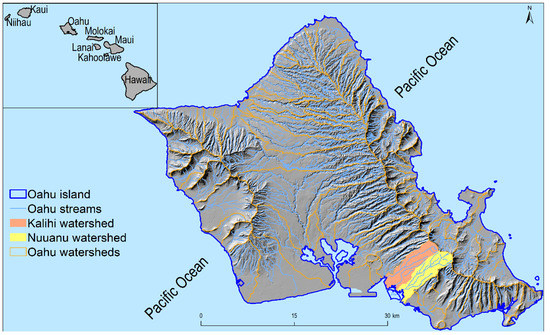