Modelling Perceived Risks Associated to the Entry of Complementors’ in Platform Enterprises: A Case Study
Previous Article in Special Issue

Artificial land use trends could represent an effective indicator of the settlement process quality and could also provide information about the efficacy of protection and exploitation policies in natural and rural areas. This work discusses an analytic procedure for the time series investigation of urban settlement development at the regional scale to verify the nexus between urban growth and demographic trends connected with the phenomenon of land take. In Italy, since 1950, the land take phenomenon has been a consequence of several factors: urbanization, realization of transport infrastructures including ports, airports, and highways, and the enhancement of industrial and productive systems. We analyzed all these territorial transformations that create waterproof soil, and more generally, a transition from natural and semi-natural uses toward artificial land use. After World War II, the demographic growth and the consequent housing demand generated a strong urbanization process in the main poles of economic development areas in Italy. Since the early 2000s, the situation has completely changed and the land take phenomenon is no longer mainly based on real need for new urban expansion areas based on effective urban planning tools, but is strongly related to a scattered demand for new housing in a weak territorial spatial planning system not able to drive effective urban development that minimizes speculative real estate initiatives. This uncontrolled occupation of soil generated, in Italy, a landscape fragmentation called the urban sprinkling phenomenon, different from urban sprawl, which is a wider phenomenon characterized by disordered urban growth. The present document aims to assess how uncontrolled expansion in areas characterized by low settlement density can generate fragmentation. To define if the territory is affected by the urban sprinkling phenomenon, two 50-year time series concerning urban expansion of buildings and demographic trends are analyzed calculating population and building density indices and their variation over the years. The sprinkling index is used to analyze the variation in the fragmentation degree at two different scales (regional and municipal). Finally, we discuss the context where this phenomenon has developed, analyzing the buildings located in hydrogeological risk zones and protected areas, and the correlation between demographic changes and the degree of territorial fragmentation variation. View Full-Text
Keywords: fragmentation; urban sprawl; Basilicata region; urban sprinkling fragmentation; urban sprawl; Basilicata region; urban sprinkling
►▼ Show Figures 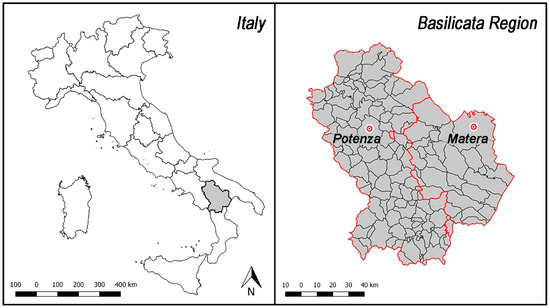