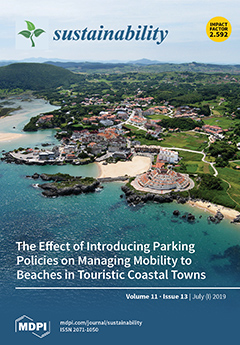 Cover Story (view full-size image): This article presents a behavioral analysis of tourists visiting a tourist beach area in the north of Spain to evaluate their reaction when faced with a series of tariffs and alternative transport modes and estimate the potential income for reinvestment in sustainable mobility policies. The active involvement of the different groups (both tourists and residents) affected by these initiatives has led to the development of several policies able to generate income for financing a new urban transport service and park-and-ride installations with shuttle services. These changes have resulted in a noteworthy improvement in the quality of life of the local residents and in a more authentic, less mass tourism experience for the visitors. View this paper
Previous Issue
Volume 11, June-2
Next Issue
Volume 11, July-2
We use cookies on our website to ensure you get the best experience. Read more about our cookies here.
Accept
We have just recently launched a new version of our website. Help us to further improve by taking part in this short 5 minute survey here. here.
Never show this again