Building Sustainable Smart Destinations: An Approach Based on the Development of Spanish Smart Tourism Plans
Previous Article in Special Issue

In order to achieve target greenhouse gas (GHG) emissions, such as those proposed by each country by nationally determined contributions (NDCs), GHG emission projections are receiving attention around the world. Generally, integrated assessment models (IAMs) are used to estimate future GHG emissions considering both economic structure and final energy consumption. However, these models usually do not consider the entire supply chain, because of differences in the aims of application. In contrast, life cycle assessment (LCA) considers the entire supply chain but does not cover future environmental impacts. Therefore, this study aims to evaluate the national carbon footprint projection in Japan based on life cycle thinking and IAMs, using the advantages of each. A future input–output table was developed using the Asia-Pacific integrated model (AIM)/computable general equilibrium (CGE) model (Japan) developed by the National Institute for Environmental Studies (NIES). In this study, we collected the fundamental data using LCA databases and estimated future GHG emissions based on production-based and consumption-based approaches considering supply chains among industrial sectors. We targeted fiscal year (FY) 2030 because the Japanese government set a goal for GHG emissions in 2030 in its NDC report. Accordingly, we set three scenarios: FY2005 (business as usual (BAU)), FY2030 (BAU), and FY2030 (NDC). As a result, the carbon footprint (CFP) in FY2030 will be approximately 1097 megatons of carbon dioxide equivalent (MtCO2eq), which is 28.5% lower than in FY2005. The main driver of this reduction is a shift in energy use, such as the introduction of renewable energy. According to the results, the CFP from the consumption side, fuel combustion in the use stage, transport and postal services, and electricity influence the total CFP, while results of the production side showed the CFP of the energy and material sectors, such as iron and steel and transport, will have an impact on the total CFP. Moreover, carbon productivity will gradually increase and FY2030 (NDC) carbon productivity will be higher than the other two cases. View Full-Text
Keywords: dynamic evaluation; input–output analysis; integrated assessment model; computable general equilibrium; carbon footprint; inventory database dynamic evaluation; input–output analysis; integrated assessment model; computable general equilibrium; carbon footprint; inventory database
►▼ Show Figures 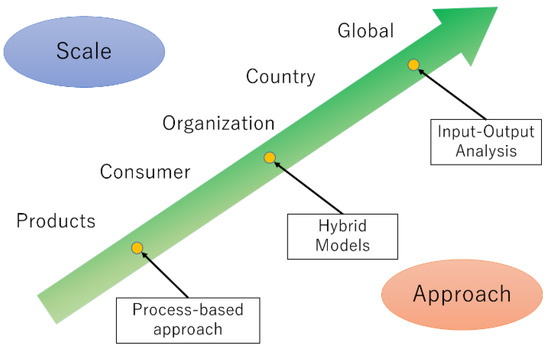