Methods to Assess the Impacts and Indirect Land Use Change Caused by Telecoupled Agricultural Supply Chains: A Review
Next Article in Special Issue

Spatial Accessibility to Hospitals Based on Web Mapping API: An Empirical Study in Kaifeng, China

2.1. Overview of the Study Area

Kaifeng, with an area of 6266 km2, is located in the east of the middle and lower reaches of the Yellow River and has major national historical and cultural importance as one of China’s eight ancient capitals. It is now a sub-central city of Henan province and is part of the core development area of the Central Plains city group. It is classed as a small to medium city and is expanding rapidly. In 2017, the city’s total population was 5.2304 million, of which the resident population was 4.5493 million [52]. At the end of 2017, there were 3273 health institutions, 21,000 sickbeds, and 29,900 health workers. Thus, per 1000 people, there are an average of 4.01 sickbeds, 5.72 health technicians, and 2.16 practicing doctors [52].
The old town, the new western urban area, the eastern urban area, and the southern urban area were selected for study because they (a) are the main loci of social and economic activity in the city (Figure 1), (b) house a large proportion of the urban population, and (c) have the most complex and congested traffic conditions. The integration of Zhengzhou and Kaifeng and the promotion of urban agglomeration in the Central Plains have led urban construction in Kaifeng to expand outward considerably in recent years. At present, the new urban area has become an important focus of urban development and expansion. The rapid expansion of cities has led to urban traffic congestion and uneven distribution of public service resources, which will not only affect accessibility to hospital care and social equity but also bring great challenges to future urban development [13,14,15,53].

The travel time to treatment is taken as the main factor restricting people’s accessibility to hospitals [24]. The time factor is very sensitive to medical care, and urban congestion will increase the cost of travel time, leading to a delay in receiving medical care. Thus, it is necessary to study travel times in peak and non-peak periods [42]. This study did not calculate travel time by using distance, and a hypothetical speed based on vector maps. Instead, it used Gaode’s web mapping route planning API to get the travel time. The speed measurement incorporated into accessibility comes from real-time feedback on road conditions, which is more accurate than the previous speed assignments based on planning. When a route is requested between a start and end point in the Gaode Map, the system will plan different travel schemes according to the mode of travel and real-time road conditions. For each route, the planning takes the multi-combinational characteristics of the travel mode into consideration and solves the problem of the “first/last 1 km” between the starting point and the destination. When planning for public transport, it also considers the number of changes required and transfer impediments, which are a good reflection of actual travel issues faced by residents [47,48]. Related studies proved these map services are based on a large amount of historical and real-time data, use scientific computing methods, and offer accurate, reliable results [49,50,55,56,57].

In this paper, we acquired multi-source data by employing web mapping API, which proffers a new approach to measure accessibility. We used the API to obtain the travel time from 4147 starting points to 30 hospitals in the study area at the same time. The technical process is as follows: (a) The starting point is defined by writing the code for the API of Gaode Map, building the web application program, parsing a certain range of building contour information, and extracting the coordinates of the unit’s centroid; (b) the destination point is acquired by requesting the hospital POI in batches from Gaode Map and converting the data returned into coordinates; and (c) traffic lines and time consumption are available in corresponding OD (Origin–Destination) matrices that are ready to be imported into ArcGIS by setting the travel mode, route selection, and travel time consumed to get to the starting point in batches. We selected a residential area and a hospital as the study sample (Figure 2a). In Figure 2, when using the navigation function of Gaode Map route planning; the system recommends three paths and corresponding estimated travel times, of which path 1 takes the shortest time. Therefore, this study uniformly selected path 1 as the data source. Optimal navigation paths and time distances were then obtained for all of the initial targets, and these are plotted in 3D maps (Figure 2b, where travel time gradually increases from below to above).
Some scholars have found that the level of medical technology at a hospital facility is a major concern for residents when making choices regarding hospital treatment [26,47]. Considering the different technical levels and hospital levels, we gave divergent weight indicators to hospitals of disparate levels, and established the mathematical model of optimal weighted accessibility as follows:
In the formula, Ai is the optimal weighted accessibility level of residential unit I, and tij is the optimal path time for those at residence unit i to arrive at hospital j (calculated by minute statistics). Wj is the weight of hospital grade j. This paper used the grade weightings proposed by Zeng [3], adopting a weight of 0.6 for high-quality medicine, 0.3 for a basic hospital, and 0.1 for a primary hospital. The higher the Ai value, the higher the accessibility level from the residential unit.
Considering the urgency with which medical assistance is required, navigation time via self-driving and public transport was taken as the measurement basis. Data were acquired on a single day in October 2017. To reflect temporal changes in accessibility more accurately, peak travel time data were obtained for 18:00 to 19:00 and non-peak data were from 10:00 to 11:00. 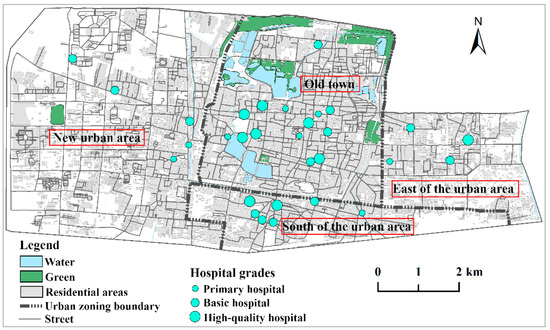 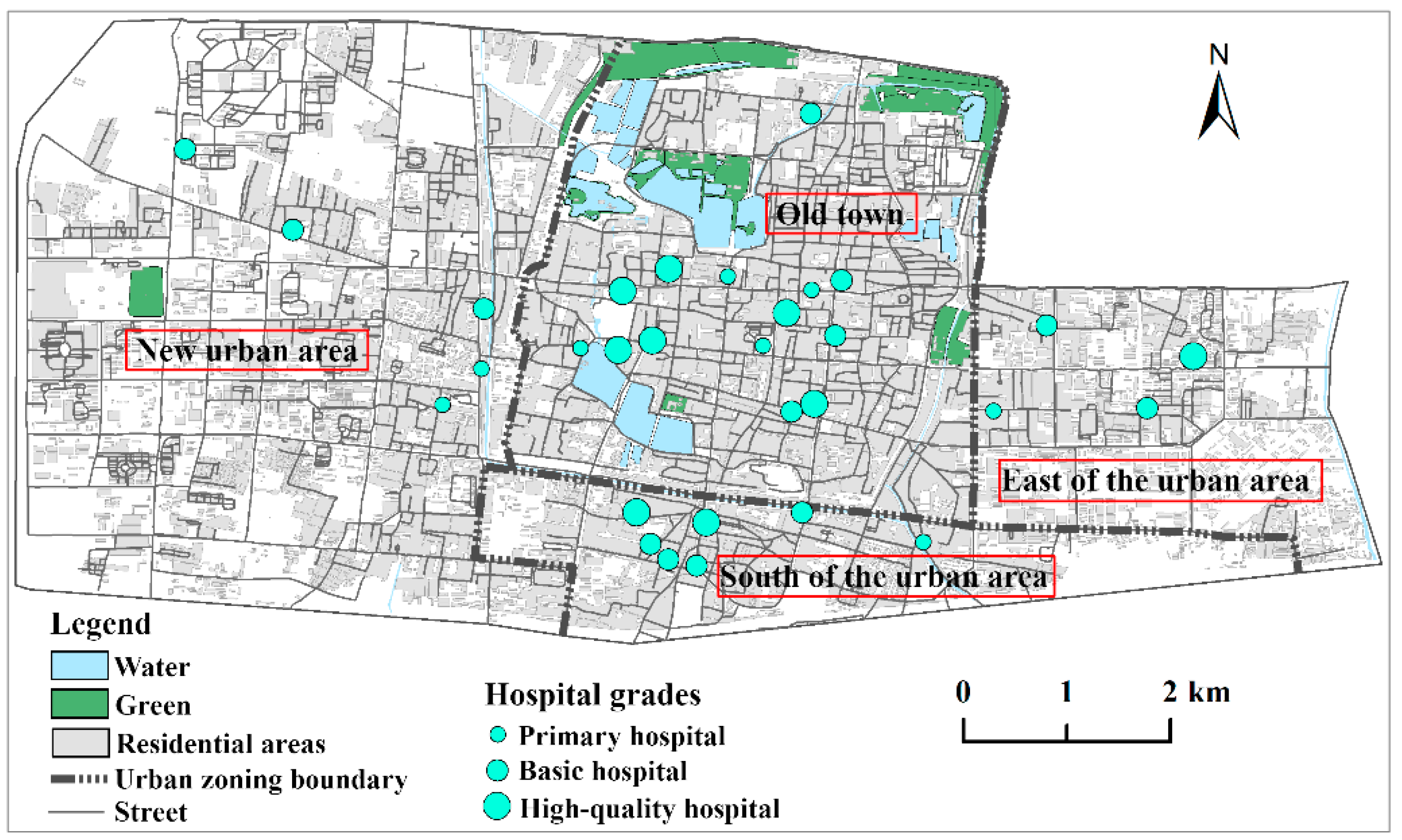 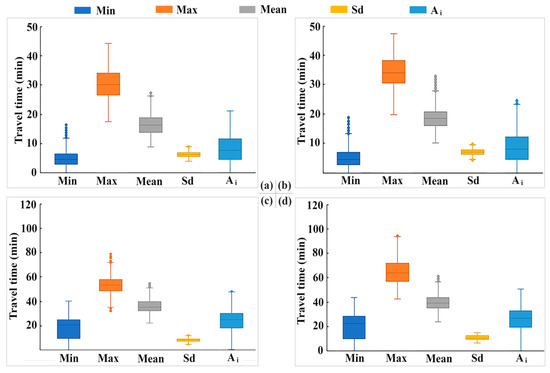 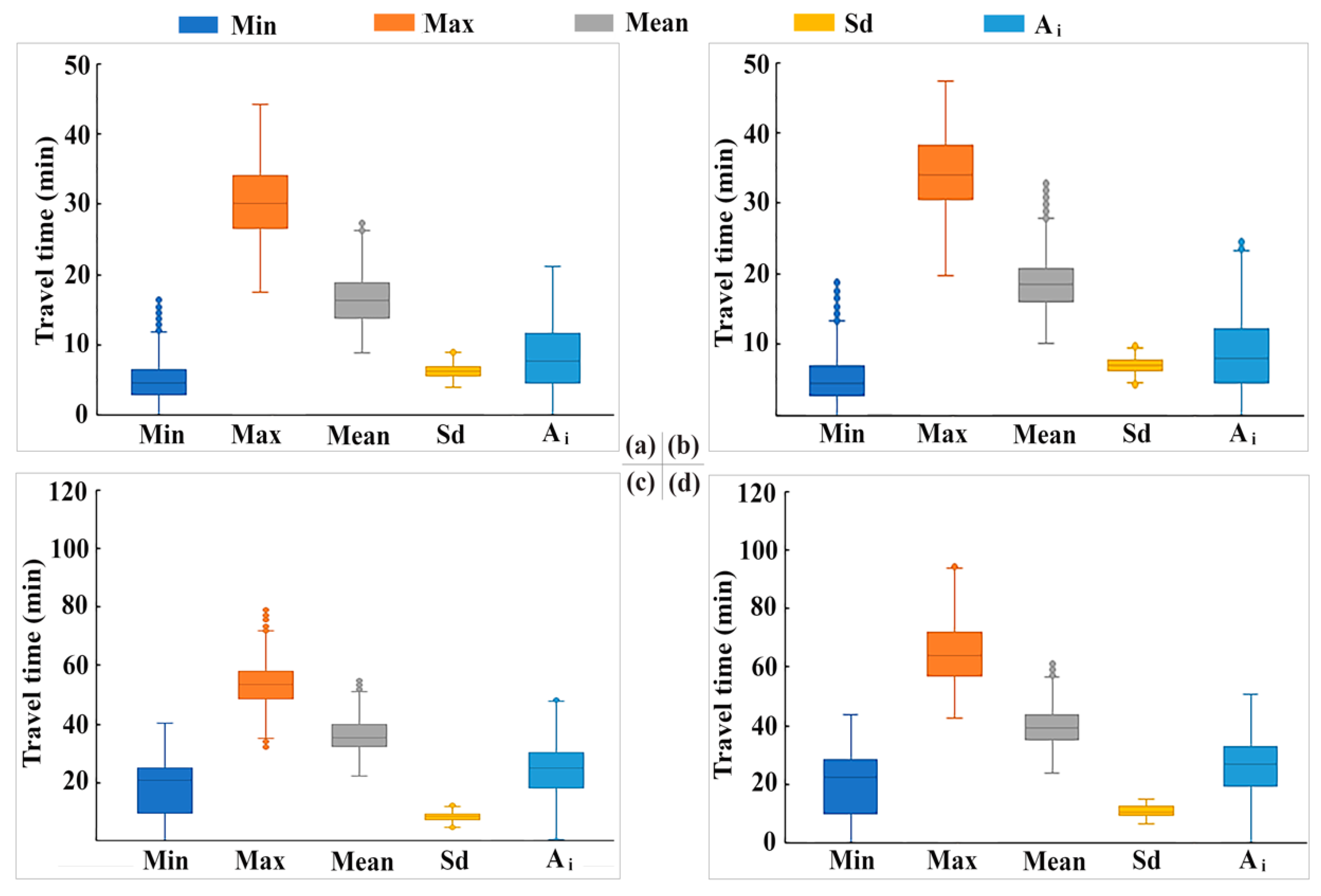 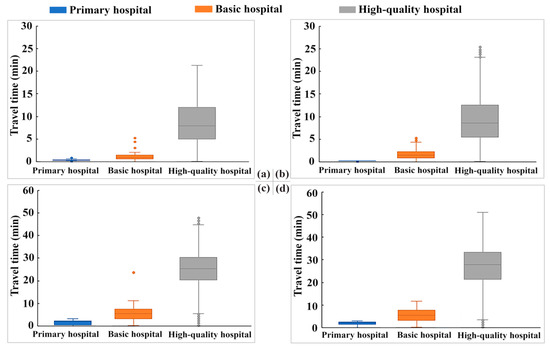 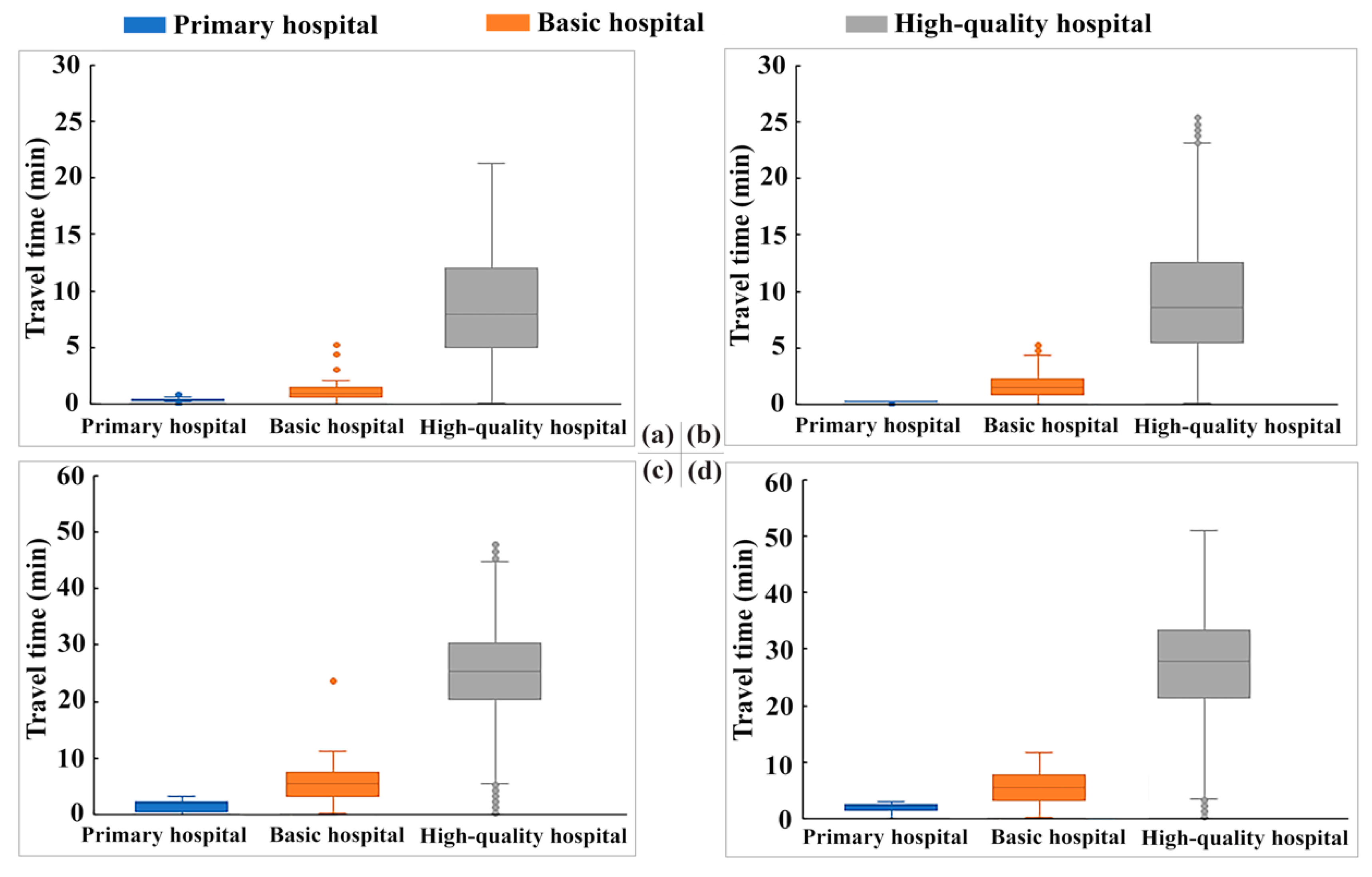 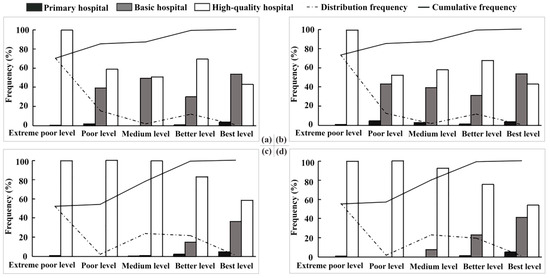 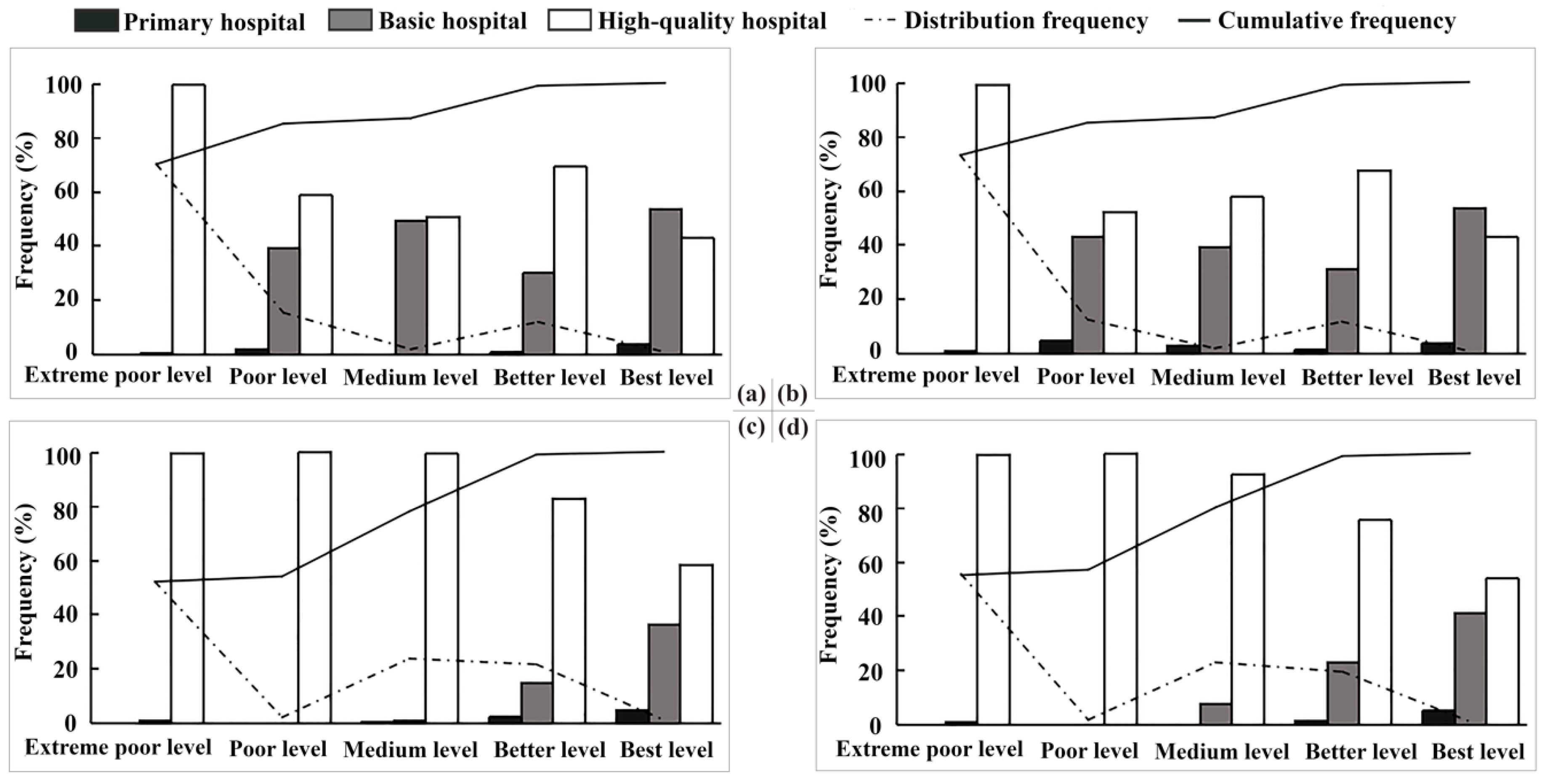 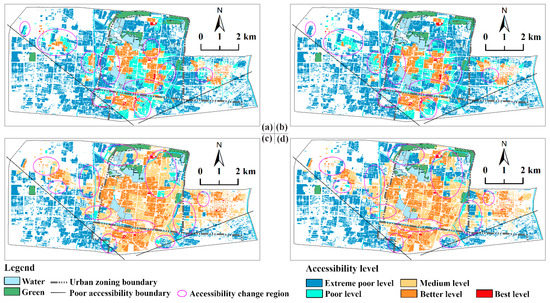 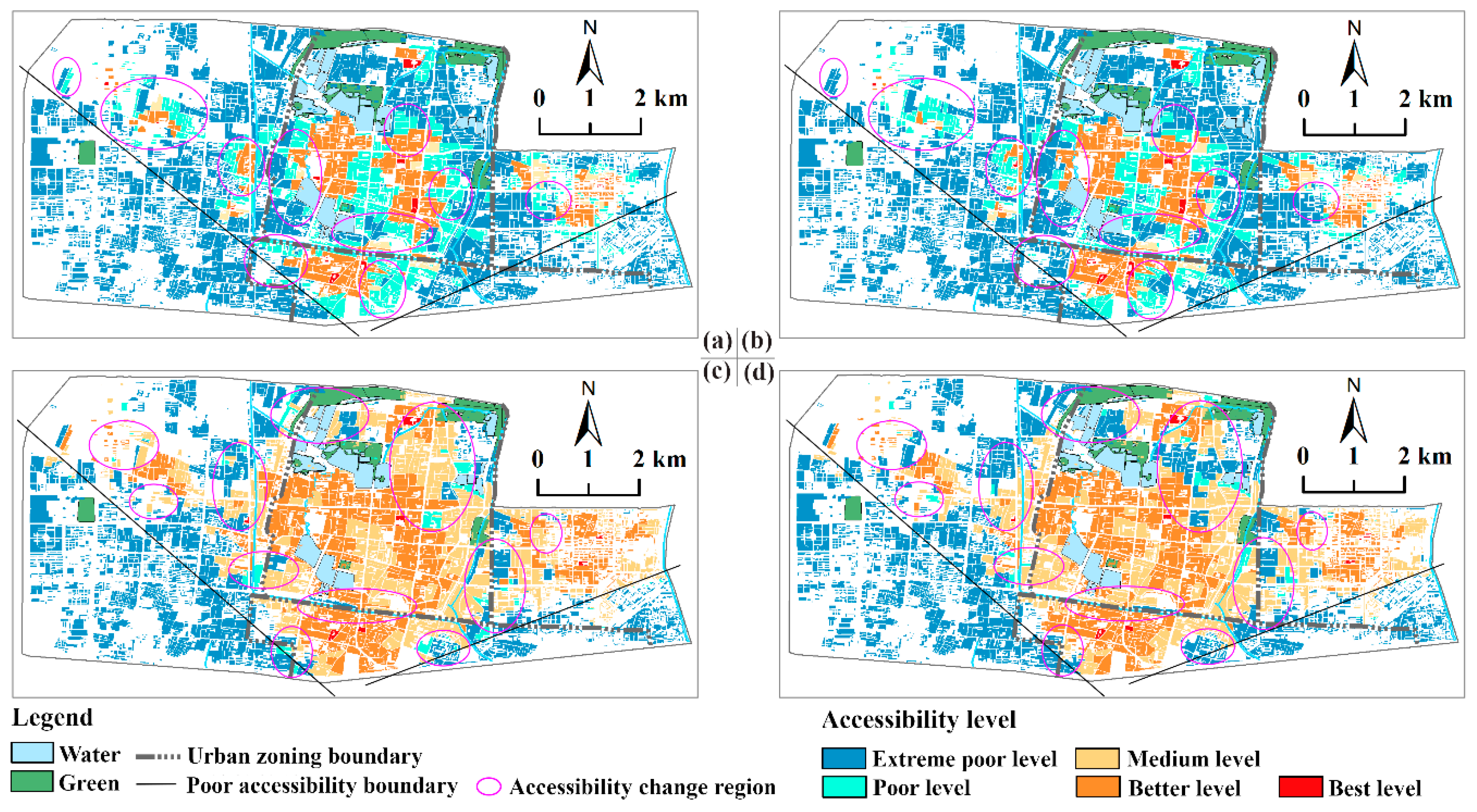 Table 1. Accessibility classification.
Table 1. Accessibility classification.
© 2019 by the authors. Licensee MDPI, Basel, Switzerland. This article is an open access article distributed under the terms and conditions of the Creative Commons Attribution (CC BY) license (http://creativecommons.org/licenses/by/4.0/).
We use cookies on our website to ensure you get the best experience. Read more about our cookies here.
Accept
We have just recently launched a new version of our website. Help us to further improve by taking part in this short 5 minute survey here. here.
Never show this again