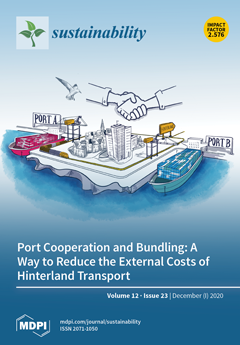 Cover Story (view full-size image): Ports are important sources of added value and employment, but the crucial hinterland connectivity often causes nuisance which threatens the licence of the port to operate. Through bundling, these external costs can be reduced and when one port does not generate enough cargo to organise a high-frequency service, cooperation with a neighbour can alleviate this problem. This paper shows how and where, for all European TEN-T ports, opportunities exist to reduce external costs and how to monetise the value of the cost reductions. It uses the case of the ports of Dunkirk and Zeebruges as an example of this quantification. View this paper
Previous Issue
Volume 12, November-2
Next Issue
Volume 12, December-2
We use cookies on our website to ensure you get the best experience. Read more about our cookies here.
Accept
We have just recently launched a new version of our website. Help us to further improve by taking part in this short 5 minute survey here. here.
Never show this again