The Role of Socio-Economic Determinants of Horse Farms for Grassland Management, Vegetation Composition and Ecological Value

Environmental Habitat Mapping of Green Mussel: A GIS-Based Approach for Sustainable Aquaculture in the Inner Gulf of Thailand

The green mussel (Perna viridis) is one of the most commercially-important cultured species along the coast of Thailand. In this study, a suitable aquaculture site-selection model (SASSM) was developed to identify the most suitable areas in the inner part of the Gulf of Thailand (InnerGoT) for green mussel culture. Satellite-derived chlorophyll-a (Chl-a) and hydrodynamic model outputs for sea surface temperature (SST), salinity, maximum water current (MWC), and bathymetry between 2018 and 2019 were used as input to the SASSM. The results show that suitability scores in mussel aquaculture areas were lowest (1–3) during the Southwest (SW) monsoon, rainy season (July–August), and highest (6–7) during the Northeast (NE) monsoon, cold season (November–December). Moderate suitability scores (4–5) were obtained during the monsoon transition from the NE monsoon to the SW monsoon, summer (April–May). The study area was further divided into three zones: the western, central, and eastern regions. The western and eastern parts showed high suitability scores (5–7) while the central zone exhibited low suitability scores (2–4). The model results show a similar pattern to the actual mussel production in the study area. Seasonal events (i.e., flood and dry seasons) were incorporated into the model to examine the seasonal effects on the suitable mussel aquaculture areas. The suitability scores during the SW monsoon in 2018 were more sensitive to changes in SST and salinity relative to 2019. The higher freshwater discharge and lower temperature in 2018 relative to 2019 resulted in the accrual of suitable aquaculture areas. This pattern is consistent with the productions of the green mussel, where higher production was recorded in 2018 (2002.5 t) than in 2019 (410.8 t). However, correlations among atmospheric (air temperature, rainfall, and wind) and oceanographic factors (SST and MWC) were significant in the western and central regions, suggesting that the suitability of green mussel aquaculture in these regions is vulnerable to environmental disturbances. Thus, the SASSM can be a powerful tool in providing useful information on spatial management for marine aquaculture in environmentally-dynamic coastal systems. View Full-Text
Keywords: environmental change; GIS-based model; green mussel; Inner Gulf of Thailand; river discharge environmental change; GIS-based model; green mussel; Inner Gulf of Thailand; river discharge
►▼ Show Figures 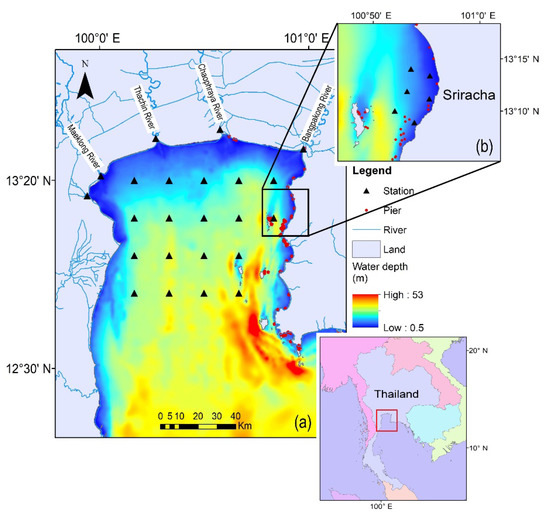