Art in Urban Spaces
Next Article in Special Issue

“Trees Are Our Relatives”: Local Perceptions on Forestry Resources and Implications for Climate Change Mitigation
Previous Article in Journal

Cross-Societal Analysis of Climate Change Awareness and Its Relation to SDG 13: A Knowledge Synthesis from Text Mining

The awareness and the engagement of various stakeholders play a crucial role in the successful implementation of climate policy and Sustainable Development Goals (SDGs). SDG 13, which refers to climate action, has three targets for combating climate change and its impact. Among the three targets, SDG 13.3 aims to “improve education, awareness-raising and human and institutional capacity on climate change mitigation, adaptation, impact reduction, and early warning”. This target should be implemented based on the understanding of climate change awareness among various groups of societies. Furthermore, the indicator related to awareness-raising is absent in SDG 13.3. Hence, this study aims to explore the differences in climate change awareness among various social groups within a country from a text mining technique. By collecting and analyzing a large volume of text data from various sources, climate change awareness was investigated from a multilateral perspective. Two text analyses were utilized for this purpose: Latent Dirichlet Allocation (LDA) topic modeling and term co-occurrence network analysis. In order to integrate and comparatively analyze the awareness differences among diverse groups, extracted topics were compared by classifying them into four indicators derived from the detailed targets in SDG 13.3: mitigation, adaptation, impact reduction, and early warning. The results show that the Korean public exhibited a relatively high awareness of early warning compared to the other four groups, and the media dealt with climate change issues with the widest perspective. The Korean government and academia notably had a high awareness of both climate change mitigation and adaptation. In addition, corporations based in Korea were observed to have substantially focused awareness on climate change mitigation for greenhouse gas reduction. This research successfully explored the disproportion and lack of climate change awareness formed in different societies of public, social, government, industry, and academic groups. Consequently, these results could be utilized as a decision criterion for society-tailored policy formulation and promoting climate action. Our results suggest that this methodology could be utilized as a new SDG indicator and to measure the differences in awareness. View Full-Text
Keywords: climate change; SDGs; text mining; topic modeling; network analysis climate change; SDGs; text mining; topic modeling; network analysis
►▼ Show Figures 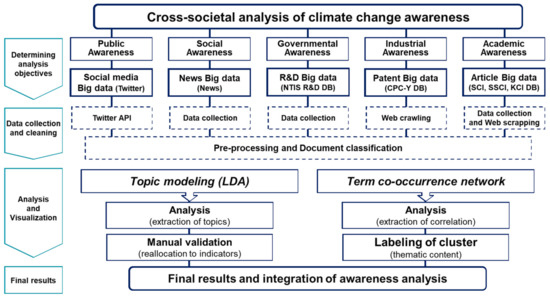