Reforestation constitutes a challenge in post-fire ecosystem restoration, although there are limitations such as species and genotype selection, planting and management design, and environmental conditions. In the present study, the basic issue is the longevity of Abies cephalonica Loudon—the Greek fir seedlings planted extensively in Parnitha National Park (Central Greece), located near the metropolitan city of Athens, following the large-scale wildfire of 2007. Seedling performance was assessed for a 3-year monitoring period (2013–2015) through the establishment of 8 permanent transects, including 400 seedlings at the burned, reforested sites. According to the long-term reforestation project, two seedling provenances were used: (a) from Mt. Mainalon (South Greece, Vytina provenance) and (b) the local one from Mt. Parnitha. Both provenances showed a relatively successful survival rate reaching, in average, 73.8%, with the first summer after planting being crucial for seedling survival. The overall mean seedling height was 39.2 ± 1.1 cm, with a mean crown diameter of 47.3 ± 1.4 cm in the last monitoring survey. Although Parnitha seedlings seem to perform better in terms of growth, seedling performance in both provenances was affected by reforestation site characteristics, mainly altitude and aspect. Approximately one third of seedlings exhibited damage in their crown architecture (29.8%), while apical bud damage was less extensive (12.2%) in the final field measurement. Data indicate that seedling performance has proved to be quite promising for post-fire restoration, although long-term monitoring data should be considered. View Full-Text
Keywords: Greek fir; reforestation; species conservation; provenance; seedling survival and growth; ecological restoration Greek fir; reforestation; species conservation; provenance; seedling survival and growth; ecological restoration
►▼ Show Figures 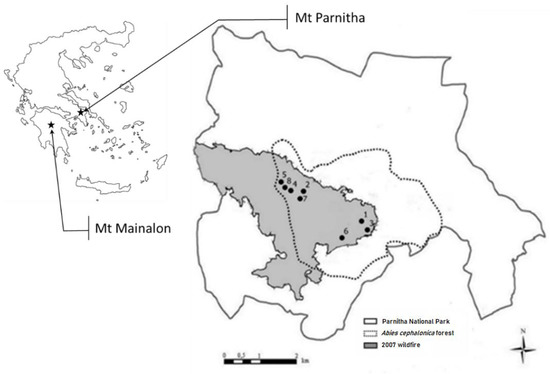 Petros Ganatsas
Prof. Ganatsas's research interests: ecology of forest ecosystems, nature conservation and the management of protected areas, evaluation and conservation of biodiversity, silviculture, forest nurseries—reforestations, plantation silviculture, landscape planning and restoration, urban and peri-urban forestry and greening. He is currently running three Special Issues as Guest Editor: 1) "Advanced Approaches for Postfire Restoration of Forest Ecosystems" in the journal Forests (MDPI), 2) "Forest Biodiversity, Conservation and Sustainability—Series II" in the journal Sustainability (MDPI), and 3) on "Forest Function to Carbon Cycle under Climate Change Conditions" in the journal Advances in Environmental and Engineering Research. Papers can be submitted in the journals' websites.
Zoom | Orient | As Lines | As Sticks | As Cartoon | As Surface | Previous Scene | Next Scene
We use cookies on our website to ensure you get the best experience. Read more about our cookies here.
Accept
We have just recently launched a new version of our website. Help us to further improve by taking part in this short 5 minute survey here. here.
Never show this again