Sustainability Understanding and Behaviors across Urban Areas: A Case Study on Istanbul City
Next Article in Special Issue

The motivational influence of wearable fitness technology (WFT) on increasing physical activity (PA) is unclear, and improvements in PA have been shown to be driven by both intrinsic and extrinsic motivation. In the current study, PA (daily number of steps), moderate to vigorous intensity physical activity, and muscular strength training were measured over 6 months on, originally, 16 randomly selected sedentary community workers (mean age = 51 years). Moreover, self-determined motivation (Behavioral Regulation in Exercise Questionnaire-2) was measured before, midway, and after a 6-month intervention program that included motivational interviewing, as well as the use of WFT and a structured outdoor gym program. Our findings showed WFT, in combination with motivational interviewing, initially helped the participants meet recommended guidelines for PA in terms of at least 10,000 steps per day, and at least 150 min of moderate aerobic activity per week. There was a large decrease in participants’ PA and increase in introjected motivation between the first half (3 months) and the second half of the intervention (6 months). The increase in introjected motivation suggests that toward the end of the 6-month intervention, participants engaged in PA to satisfy external demands or avoid guilt, which may lead to less-persistent behavior change. View Full-Text
Keywords: health; motivation; physical activity; wearable fitness technology health; motivation; physical activity; wearable fitness technology
►▼ Show Figures 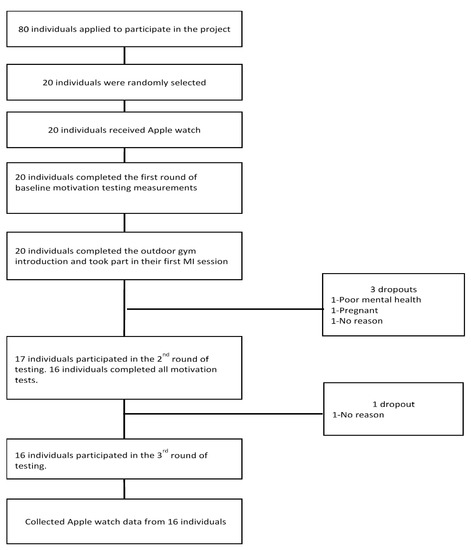