Blood, Hair and Feces as an Indicator of Environmental Exposure of Sheep, Cow and Buffalo to Cobalt: A Health Risk Perspectives

Exposure to toxic metals (TMs) such as cobalt (Co) can cause lifelong carcinogenic disorders and mutagenic outcomes. TMs enter ground water and rivers from human activity, anthropogenic contamination, and the ecological environment. The present study was conducted to evaluate the influence of sewage water irrigation on cobalt (Co) toxicity and bioaccumulation in a soil-plant environment and to assess the health risk of grazing livestock via forage consumption. Cobalt is a very necessary element for the growth of plants and animals; however, higher concentrations have toxic impacts. Measurement of Co in plant, soil and water samples was conducted via wet digestion method using an atomic absorption spectrophotometer. The Co pollution severity was examined in soil, forage crops (Sorghum bicolor Kuntze, Sesbania bispinosa (Jacq.) W. Wight, Cynodon dactylon (L.) Pers., Suaeda fruticosa (L.) Forssk. and Tribulus terrestris L.) in blood, hair and feces of sheep, cow and buffalo from district Toba-Tek-Singh, Punjab, Pakistan. Three sites were selected for investigation of Co level in soil and forage samples. Highest concentration of Co was 0.65 and 0.35 mg/kg occurring in S. bicolor at site I. The sheep blood, cow hair and sheep feces samples showed highest concentrations of 0.545, 0.549 and 0.548 mg/kg, respectively at site I and site II. Bioconcentration factor, pollution load index, enrichment factor and daily intake were found to be higher (0.667, 0.124, 0.12 and 0.0007 mg/kg) in soil, S. bicolor, S. fruticosa and in buffalo, respectively, at site I. It was concluded that forage species irrigated with wastewater are safe for consumption of livestock. However, though the general values were lower than the permissible maximum limit, it was observed that the bioaccumulation in the forage species was higher. Therefore, soil and food chain components should be avoided from trace metal contamination, and other means of nonconventional water resources should be employed for forages irrigation.
Keywords: heavy metals; metal toxicity; plant-soil environment; effluents; livestock heavy metals; metal toxicity; plant-soil environment; effluents; livestock

Toba-Tek-Singh Region is located in Southern Punjab (Pakistan) and geographically arranged in Rechna Doab between Chenab Stream and Ravi Waterway. Toba-Tek-Singh exhibit 30°33′ to 31°2′ N and the longitude 72°08′ to 72°48′ E. Dry climate extends from April to October, while May, June and July are the most sizzling months. The mid-year season temperature is in the range of 42 ℃ and 29 ℃, while cooler months include December, January and February. Annual precipitation is mostly around 158 mm. The soil of Toba-Tek-Singh Region is mostly alluvial plain, and many crops—wheat, maize, sunflower, rice, cotton and several kinds of forage crops—are grown. Chenab and Ravi supply most of the water through small streams and link canals via water channels up to the farmer’s field. The local water resources are not adequate to restore the ground water for drinking and water framework reason, so the streams are the essential source to invigorate the groundwater assets [31]. Study was led in Toba-Tek-Singh.

Testing of soil, blood and hair was completed in the summer season. From each destination, summer inspection used to be executed in August 2019. For the present study, three different sites were selected at Toba-Tek-Singh (Figure 1). The study sites were selected at random and 1 km away from roads. Samples, along with 3 replicates, were collected as per procedure [32]. Soil and plant samples were taken sealed in label paper bags. The soil samples were chosen from 3 different site of soil of Sorghum bicolor, soil of Sesbania bispinosa, soil of Cynodon dactylon, soil of Suaeda fruticosa and soil of Tribulus terrestris. The forage chosen for this experiment includes Sorghum bicolor, Sesbania bispinosa, Cynodon dactylon, Suaeda fruticosa and Tribulus terrestris. Meanwhile, the blood, hair and feces samples of cow, buffalo and sheep were collected.
The soil samples were collected simultaneously at 5, 10, 15 and 20 m away from highway at a soil depth of 20 cm. [12]. Forage and soil samples were dried in stove at 72 ℃ for 48 h to achieve a steady dry weight. Sampling was done in August 2019. Soil samples were taken from different depths of field soils having forages. The same forage plots were used as grazing units for selected animals. The oven-dried soil samples were subjected to digestion and analysis. The healthy animals were selected for blood plasma sampling and to determine the heavy metal (Co). Specimen of blood (15 mL) was collected from the jugular vein of selected animals with a help of heparin needles to avoid blood coagulation [12]. Plasma was centrifuged at 2500 rpm for 2 min to make plasma parcel. The serum was taken to the laboratory in a chilled box and maintained frozen at −20 °C before investigation [32].

The soil samples were dried in stove for 72 h followed by grinded into fine powder. The powdered soil sample of 2 g was added to the digestion tube. Add 20 mL concentrated H2SO4 into the tube. Run the digestion chamber for 30 min. Further add 10 mL H2O2 to assist digestion. And again run the chamber until colorless solution was obtained. Solution was filtered and makes a final volume 60 mL through distilled water addition. The final volume of sample was stored in glass tubes for further metal analysis [12].

Forage sample were dried in an oven for 72 h to eliminate moisture content and afterward crushed with the help of a blender. The 1 g of forage samples were digested with H2SO4 and H2O2 (4:2) at a temperature of 250 °C for 3–4 h till the solution became colorless and thick white fume arose in the flask. The mixture was incubated, cleaned with distilled water, passed through filter paper and diluted the sample to make the volume up to 50 mL [12].

The anticoagulant blood was centrifuged. At that point 2 mL of blood plasma were mixed with 2 mL of H2SO4 and combined sample were left in the lab for entire night for digestion. All the natural tissues were broken down and solution of sample was digested by warming at 120 °C. At this stage, 2 mL of H2O2 has been added to improve the digestion by degradation. The treated samples were cooled and the processed digested samples were diluted up to 50 mL using distilled water and set in glass tubes for assessment. Solid metal concentrations were determined utilizing the Atomic Absorption Spectrophotometer (AAS) (Shimadzu double beam AA-6300 and Perkin Elmer Analyst 400) [12].

Heavy metal cobalt (Co) concentration was analyzed by atomic absorption spectrum (Shimadzu double beam AA-6300 and Perkin Elmer Analyst 400). The quality assurance was achieved by measuring natural matrix certified reference material (CRM-1570) and measuring duplicates for each batch of samples to ensure the stability of the outcomes. The samples were handled cautiously to inhibit pollution. Double distilled water was used during the evaluation and glass was methodically washed. An analysis was carried out to validate different steps by homogenizing the examined samples with a varying quantity of standard solutions.

PLI was estimated by equation given by Liu et al. [33].
PLI = ‘metal content in examined soil sample/metal concentration in reference soil’.
Reference value of Pb and Co in soil is 8.15 and 9.1 mg/kg [33].

Metals enter in body of organisms through diverse pathways, through skin contact, during breathing or by consuming contaminated fodder [35].
DIM = C metal × F conversion factor × D food intake/B average weight of sheep DIM by ingesting of forages is 1.51 (kg per sheep-1) and normal weight of sheep is 45 kg was used as reported by Bonnet et al. [36].
Conversion factor of 0.085 was applied to change green plant mass to dry weight [37].
Tolerable daily intake limit of Pb and Cu is 0.21 and 3.01 (mg kg−1day−1).

3.3. Metal Concentration of Co in Animal Blood, Hair and Feces

We concluded that bioaccumulation of cobalt (Co) was significantly higher but below the permissible limits, and further irrigation with sewage water should be avoided. Highest concentration of Co was recorded in sheep blood, cow hair and sheep feces. Bioconcentration factor, pollution load index, enrichment factor and daily intake were higher in soil under cultivation of S. bicolor, C. dactylon and S. fruticosa. Highest concentration of cobalt was occurred in S. bicolor at site 1, in sheep blood, cow hair and sheep feces that were 0.545, 0.549 and 0.548 mg/kg, respectively, at site II and I. The general values were lower than the permissible maximum limits; it was observed that the bioaccumulation in the forage species was higher at some sites. High cobalt level in forages, particularly S. bicolor and C. dactylon from different sites, calls for the sound management of hazardous wastewater. High levels of Co toxicity showed the possible health risks to cattle and the human population (through animal meat) of the studied region. It is highly needed to address the cobalt contamination in the soil–plant–water–livestock nexus to avoid its entry into the food chain of the domesticated animals.

Z.I.K. and K.A. conceived and designed the study. M.I.H., M.S.A., M.S.E. critically revised the manuscript. All authors approved the final version. M.N. executed the experiment and compiled data. M.U.F.A. statistically analyzed the data and help in chemical analysis. Z.I.K. critically edited and revised the manuscript, prepared the graphs. M.N. helped in sample collection and chemical analysis. All authors have read and agreed to the published version of the manuscript.

We acknowledge the Higher Education Commission of Pakistan for their financial cooperation in this research project #2484/13.

Informed consent was taken from formers to conduct the study and to collect the samples. They were briefed about the research plan in details.

Data and material is available for research purpose and for reference.

The authors declare that they have no conflict of interest. 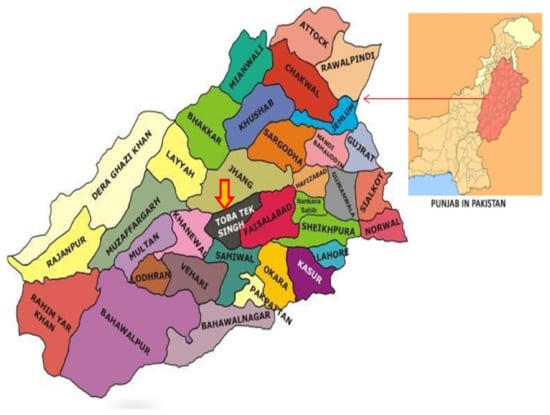 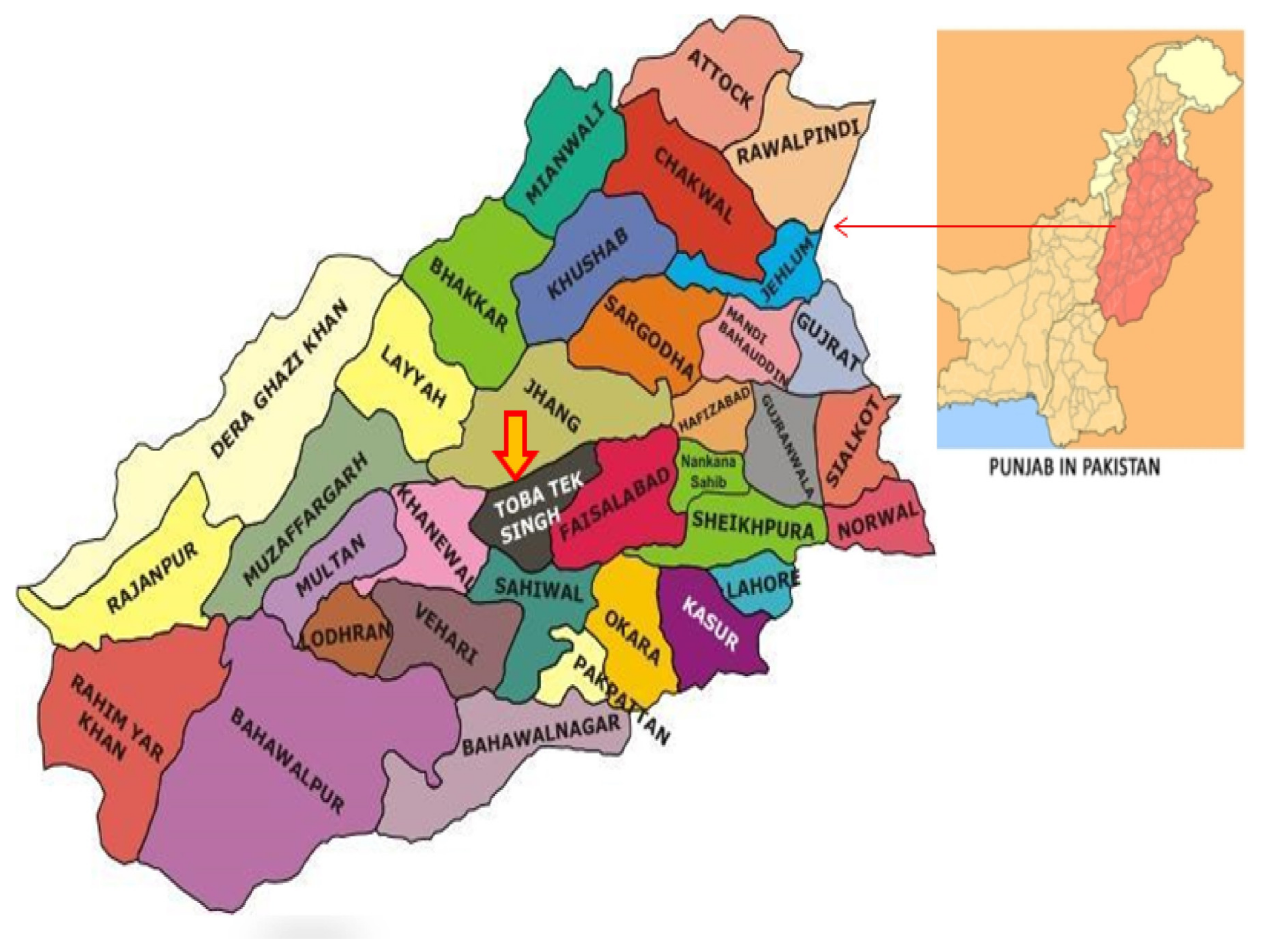 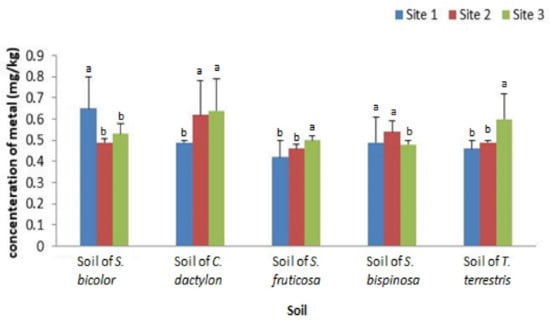 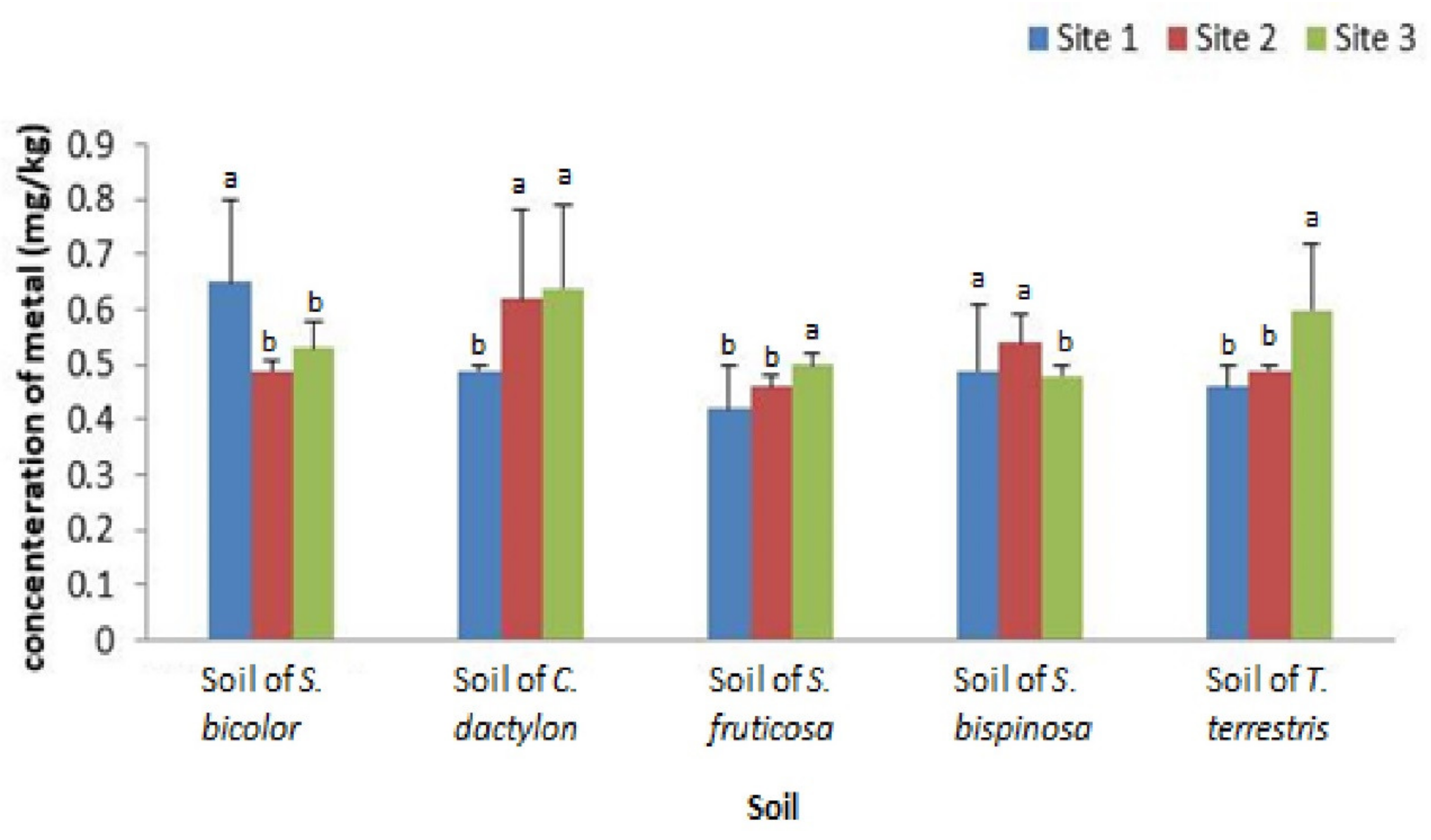 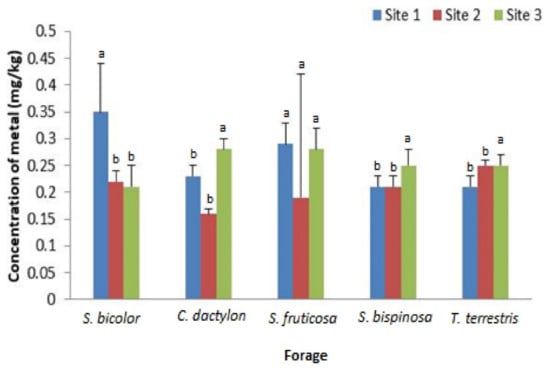 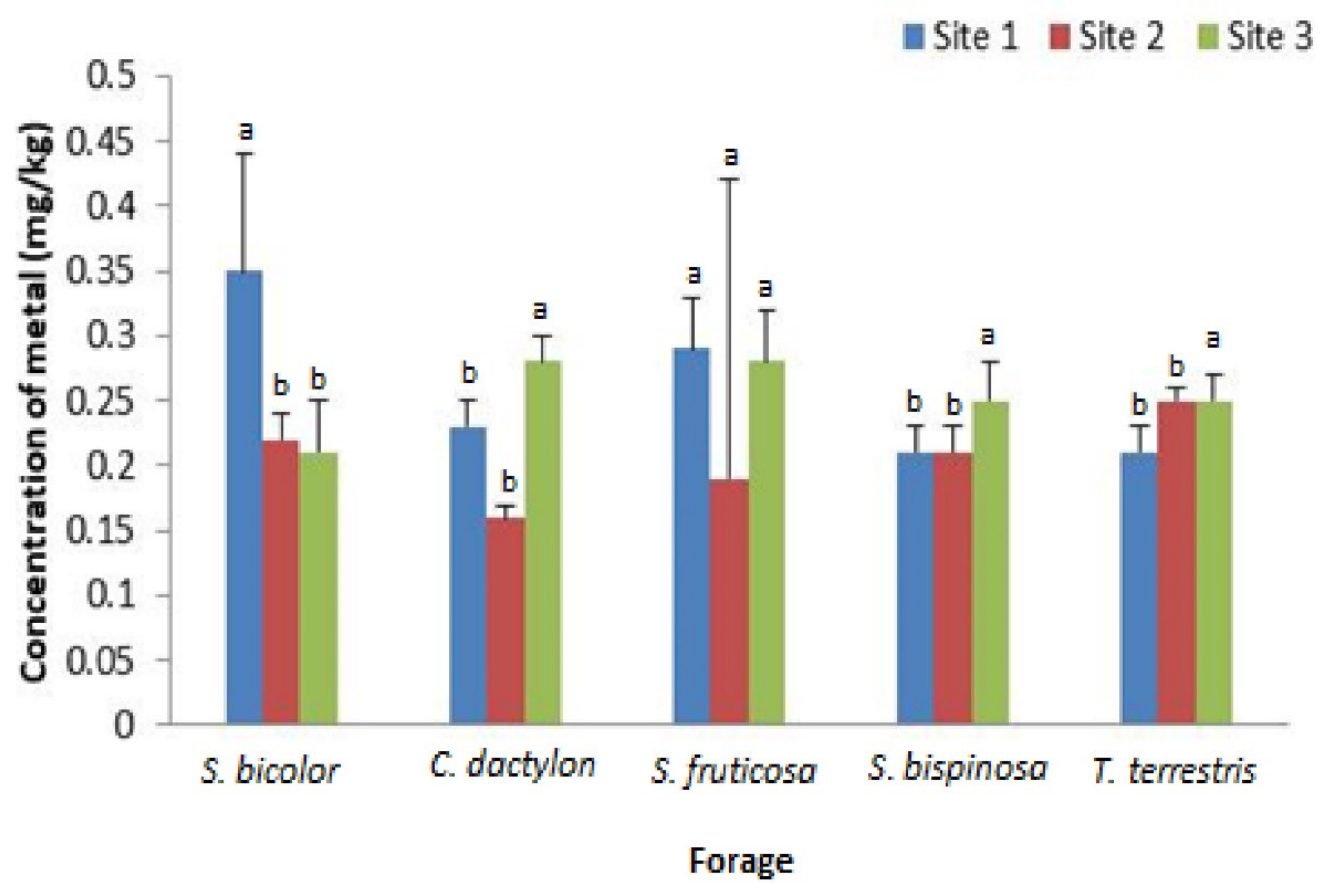 Table 9. Health risk index for Co.
Table 9. Health risk index for Co.
© 2021 by the authors. Licensee MDPI, Basel, Switzerland. This article is an open access article distributed under the terms and conditions of the Creative Commons Attribution (CC BY) license (https://creativecommons.org/licenses/by/4.0/).
We use cookies on our website to ensure you get the best experience. Read more about our cookies here.
Accept
We have just recently launched a new version of our website. Help us to further improve by taking part in this short 5 minute survey here. here.
Never show this again