Unemployment Rates Forecasting with Grey-Based Models in the Post-COVID-19 Period: A Case Study from Vietnam
Next Article in Special Issue

Notwithstanding the substantial progress acheved since 2010 in the attempts to realize the potential of microalgae biofuels in the transportation sector, the prospects for commercial production of CO2-neutral biofuels are more challenging today than they were in 2010. Pure P. moriformis microalgae oil was subjected to unmodified engine performance testing as a less investigated type of fuel. Conventional diesel was used as a reference fuel to compare and to contrast the energy balances of an engine as well as to juxtapose performance and emission indicators for both unary fuels. According to the methodology applied, the variation of BSFC rates, BTE, smoke opacity, NOx, HC, CO2, O2, and exhaust gas temperature on three different loads were established during compression ignition (CI) engine operation at EGR Off, 25% EGR, 18% EGR and 9% EGR modes, respectively. Simulation model (AVL Boost/BURN) was employed to assess the in-cylinder process parameters (pressure, pressure rise, temperature, temperature rise, ROHR, and MFB). Furthermore, the first law energy balances for an engine running on each of the test fuels were built up to provide useful insights about the peculiarities of energy conversion. Not depending on EGR mode applied, the CI engine running on microalgae oil was responsible for slightly higher BTE values, drastically reduced smoke opacity, higher CO2 values, and smaller O2 concentration, marginally increased NOx levels and lower total energy losses (in %) if compared to the performance with diesel fuel. View Full-Text
Keywords: microalgae oil; energy balance; renewable fuel; engine performance microalgae oil; energy balance; renewable fuel; engine performance
►▼ Show Figures 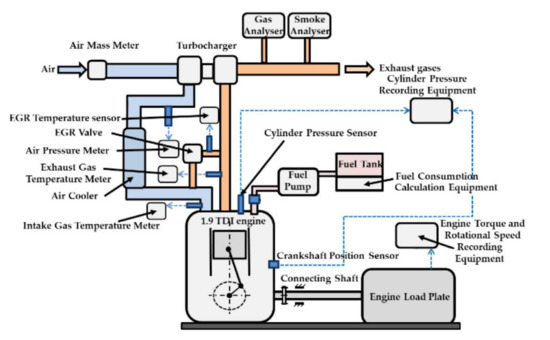