Does Reduction of Contribution Rate Affect the Sustainability of China’s Basic Endowment Insurance Fund?—Based on the Background of National Pooling and Collection Responsibility Transformation

Robert A. Pollak (1970) first put the formation of internal habits into the ELES model, and believed that the formation of internal habits affects basic needs, and the form of dependence of basic demand on previous consumption can be divided into the following forms:
First, , the basic consumption in period t () is positively correlated with the demand in period t − 1().
Second, , , the basic consumption in period t consists of physiological needs () and psychological needs (). Obviously the second case is more in line with the actual situation than the first case.
The third one is , , that is, the consumption in period t is a linear function of the weighted sum of all previous consumption (), is the memory coefficient.
And these three forms can be unified into the following forms: where, the basic demand for the k-th good (service) is divided into two parts: “physiological needs” and “psychological needs” ; physiological needs are the most basic and minimal needs of human beings, and the most basic consumption for human survival, and they have nothing to do with income, where ψ(k) represents the internal habit formation parameter of the k-th commodity and reflects the degree of influence of habit-forming stock on current consumption and is the habit-forming stock at period t − 1 of the k-th consumer product, which is the weighted average of consumption during past periods. If we substitute it into a utility function containing internal habits (in this case, the utility function is not just a function of the demand for various commodities during the current period, the internal habit stock also affects the utility level):
In the above formula, β is the marginal budget share, which represents the allocation ratio of an additional unit of budget to various commodities. The utility function form here is proposed by L.R. Klein and H. Rubin in 1947. Here is a reference to these two practices.
The equation that maximizes the consumer’s current utility under budget constraints is:
Constructing the Lagrangian function at the boundary:
The first-order condition for maximizing utility is:
Given consumer income and the prices of various commodities, optimal demand can be obtained from:
The above formula is solved from the above equations (line 267 and 268) and combined with the previous formula. Due to space limitations, the finishing process is omitted.
Multiplying on both sides of the above equation, represents the consumption expenditures of the first category of goods (services), yielding:
Among them, represents the consumer’s total physiological demand for various types of commodities and reflects the habitual inventory of the consumption of the k-th category of commodities. To simplify the model, we assume that the habitual stock depends on the demand from the previous period, that is, , thus, and the model can be simplified to:
Representing the above model as a panel data model yields the following equation:

Assuming that the formation of external habits only affects basic needs and that the demonstration effect of consumption is lagging, the impact of consumer i on the demonstration effect of other consumers can be expressed as: where N is the total number of consumer groups, represents the external habit formation parameter, reflecting the degree of influence of consumer j on consumer i. Since having too many parameters to be estimated will significantly reduce the degrees of freedom of the data, it is further assumed that other consumers have the same influence on consumer i. This yields: where reflects the average impact of other consumers on consumers and s the average demand of the k-th category of other consumers during the previous period. Similarly, the utility function containing external habits is optimized. We can obtain optimal demand as:
If we let and multiply p(k) on both sides of the above equation, we can obtain the panel model form as:
In summary, after integrating the internal and external habit formation theories into the panel ELES model, two meaningful conclusions can be drawn from the above constructed models, Models (1) and (2). The first point is that consumption demand can be divided into two parts: basic demand and supplementary demand. Supplementary demand is supplementary consumption after deducting basic demand from income. Basic demand is composed of “physiological demand” and “psychological demand”. Parameter measures the internal habits of consumer spending, is the coefficient of variation in the presence of individual differences, which measures the degree of demonstration consumption of the surrounding groups. The intercept of Model (1) consists of two parts—physiological needs and psychological needs . The second point is that physiological demand is not related to income level whereas psychological demand, which is related to previous consumption expenditures, is related to income level. The impact of internal habits on consumption expenditures has a time effect and the demonstration effect has an individual effect, which confirms empirical research on panel ELES models; other studies have found the results of time effects and individual effects. Third, Model (1) is a dynamic panel model. To avoid the problem of biased estimation of endogenous explanatory variables, the system generalized moment method model is used to estimate the dynamic panel model and the validity of the instrumental variables is tested using the Sargan test, which was proposed by Arellano and Bover [41] and Blundell and Bond [42]. Therefore, integrating the habit formation theory into the ELES model expands the theoretical connotations of the original model and partially explains the causes of the temporal and individual effects in the panel ELES model from the perspective of consumer behavior.

From the perspective of economic development and ecological resource protection, there is an important relationship between residential consumption and sustainable development. Consumption is an economic behavior that humans use to satisfy their own desires through consumer goods, consumption is divided into production consumption and personal consumption. As the economy develops and consumption increases, the earth’s resources are decreasing. Many developing countries develop their economies in traditional models, that is, the economy of one-way material flow composed of “resources-products-pollution discharge”. In the process of production, processing and consumption, pollution and waste are discharged into the environment in large quantities. The use of resources is often extensive and one-off, so economic development, consumption growth and environmental protection are interdependent. To properly handle the relationship between consumption and sustainable development, for developing countries, solving environmental problems caused by consumption and economic development depends on development in the final analysis. However, economic development cannot be at the expense of the environment and cannot take the road of pollution first and then treatment. We must take the road of sustainable development and develop a circular economy. We should reduce and eliminate the production methods and consumption methods that cannot sustain development, so that the economy, society and environment can develop in harmony. Therefore, the conclusions of this paper are applicable to most developing countries.
By constructing a mathematical model, this paper effectively tests the time effects of Chinese rural residents’ physiological needs and physiological needs in various consumer expenditure centers and examines the comparison effect of Chinese rural residents in various consumer expenditures in different regions. This shows that for the analysis of rural consumer behavior, the panel ELES model constructed in this paper within the formation of internal and external habits is practical and reliable. Since the model in this paper is a panel ELES model based on internal and external habit formation theory, utility function, basic demand theory and other theories, this model can be applied to the research of related residents’ consumption behavior. For example, the model can be extended to study the comparison effect of consumption between different classes of society, as well as the changes in the psychological and physiological needs of various types of consumption expenditures between different classes. The future research direction of this paper is mainly to study the changes in the psychological and physiological needs of urban and rural residents of different income groups in various consumption expenditures, analyze whether different groups have a demonstration effect in various consumption expenditures, and analyze the differences in the demonstration effects of various types of consumption among different income groups.
The disadvantage of this article is that this paper fails to deduce the various consumption characteristics of rural residents in different regions in various consumption expenditures under the effect of habit formation, such as income elasticity, self-price elasticity, mutual price elasticity and the internal custom series and external custom series in different regions.

This article is sponsored by the National Social Science Foundation project “Research on the consumption structure of urban and rural residents based on the perspective of the embedded panel ELES model of habit formation” (grant number: 19BJL047).

All the data used in this article can be found in the China Statistical Yearbook. 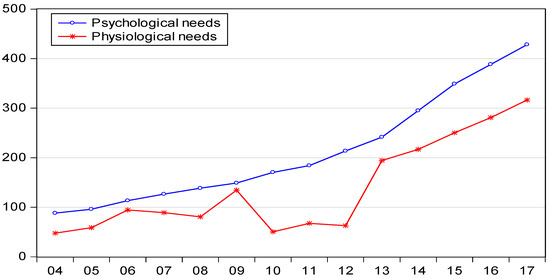 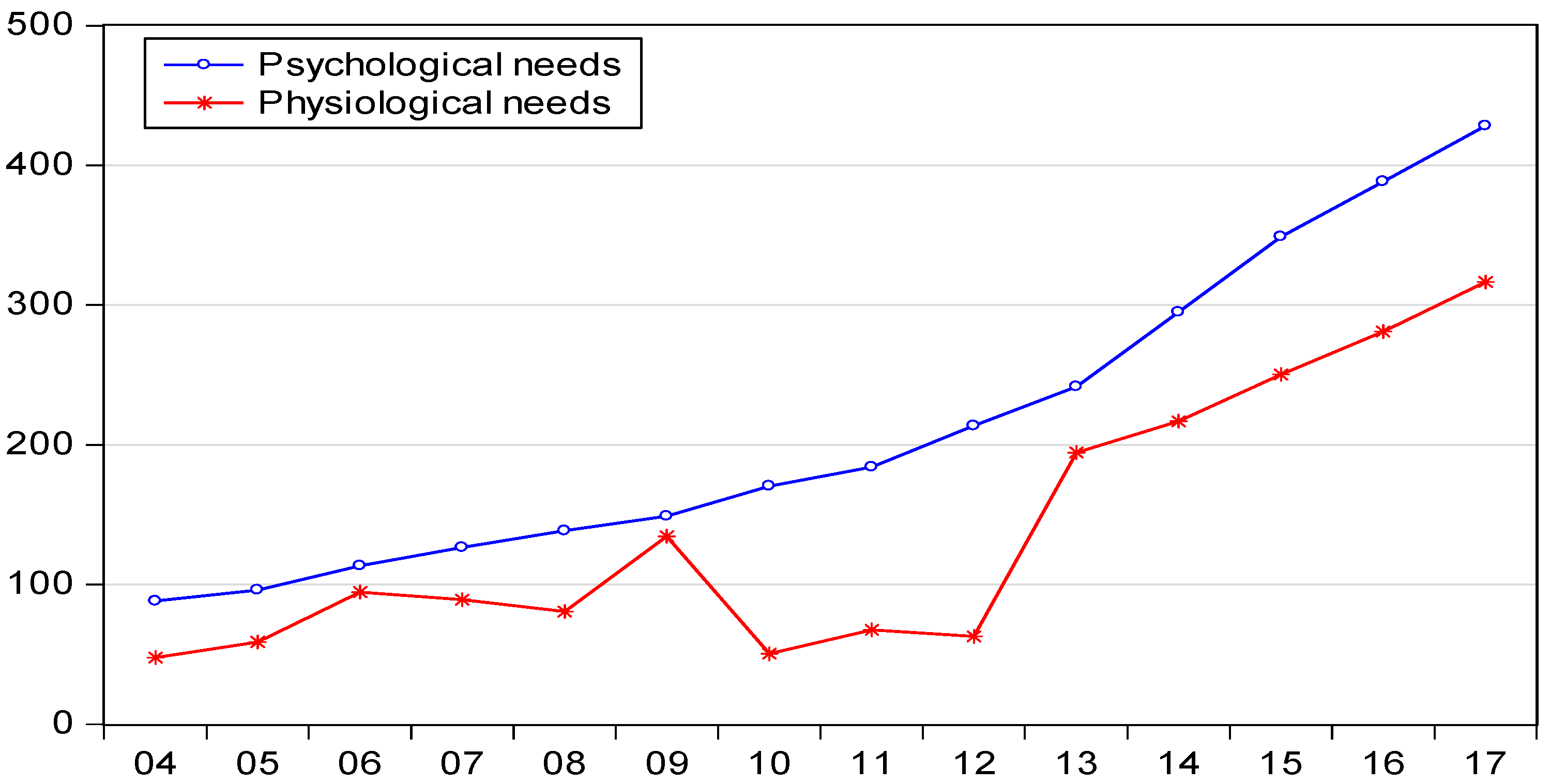