Economic viability of biodiesel production relies mainly on the productivity of biomass and microalgal lipids. In addition, production of omega fatty acids is favorable for human nutrition. Thus, enhancement of lipid accumulation with high proportion of omega fatty acids could help the dual use of microalgal lipids in human nutrition and biodiesel production through biorefinery. In that context, phytohormones have been identified as a promising factor to increase biomass and lipids production. However, nitrogen limitation has been discussed as a potential tool for lipid accumulation in microalgae, which results in simultaneous growth retardation. The present study aims to investigate the combined effect of N-depletion and 3-Indoleacetic acid (IAA) supplementation on lipid accumulation of the marine eustigmatophyte Nannochloropsis oceanica as one of the promising microalgae for omega fatty acids production. The study confirmed that N-starvation stimulates the lipid content of N. oceanica. IAA enhanced both growth and lipid accumulation due to enhancement of pigments biosynthesis. Therefore, combination effect of IAA and nitrogen depletion showed gradual increase in the dry weight compared to the control. Lipid analysis showed lower quantity of saturated fatty acids (SFA, 26.25%) than the sum of monounsaturated (MUFA) and polyunsaturated fatty acids (PUFA). Under N-depletion, SFA decreased by 12.98% compared to the control, which recorded much reduction by increasing of IAA concentration. Reduction of SFA was in favor of PUFA, mainly omega-6 and omega-3 fatty acids which increased significantly due to IAA combined with N-depletion. Thus, the present study suggests a biorefinery approach for lipids extracted from N. oceanica for dual application in nutrition followed by biodiesel production. View Full-Text
Keywords: integrated impact; phytohormones; biofuels; renewable energy; Nannochloropsis oceanica; essential fatty acids integrated impact; phytohormones; biofuels; renewable energy; Nannochloropsis oceanica; essential fatty acids
►▼ Show Figures 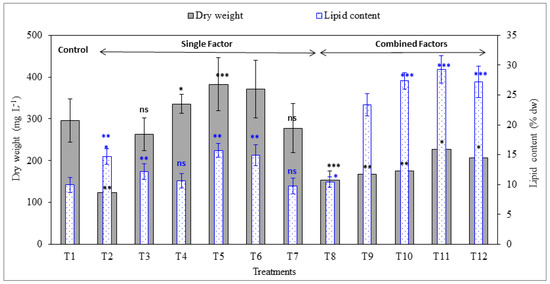 
Touliabah, Hussein E.-S., and Adel W. Almutairi. 2021. "Effect of Phytohormones Supplementation under Nitrogen Depletion on Biomass and Lipid Production of Nannochloropsis oceanica for Integrated Application in Nutrition and Biodiesel" Sustainability 13, no. 2: 592. https://0-doi-org.brum.beds.ac.uk/10.3390/su13020592