Accessibility and Walkability represent, today, some of the most striking challenges contemporary cities are facing, particularly in light of the goals from UN Agenda 2030, aimed at a sustainable city, and particularly in terms of a livable, healthy and inclusive city. This can be also performed thanks to a set of high quality public services and a set of important and central services and infrastructures. These principles, however, are constrained by an overall, general fragmentation affecting many urban areas, particularly as an outcome of the vehicular accessibility needs. Scholars have debated through the years on the nature of cities and on the preference for centrality of services compared to the distribution of services towards dispersed neighborhood units. Recently, a need for a wider, minimum set of services that is easily reachable to most citizens is filling the scholars and city mayors’ agendas in order to improve urban performances. This is also coupled with a huge surge in the heritage of abandoned urban items coming from previous periods of time and alternative uses. The aim of this research is to evaluate the role of abandoned urban assets—particularly big-size buildings and compounds and their areas—to facilitate the implementation of the concept of a 15-minute city, a city that is capable of granting a wider social equality and access to main urban services to citizens and city users. To do this, we developed a set of indexes, capable of detecting porosity, crossing and attractiveness. This latter index in particular represents a combined index that can be used to improve the accessibility of pedestrians in urban central locations. In the present research, we decided to limit the analysis to a subset of disused public buildings in the historic center of a sample city, as Cagliari (Sardinia, Italy). This was done in order to understand if and in which terms they can contribute, after their redevelopment, to the development of the 15-minute city, as well as reducing the “enclave–effect: they are, at present, playing in the historic urban fabric. View Full-Text
Keywords: public real estate; disused properties; divestment; urban walkability; urban accessibility; Cagliari; Sardinia; Italy; 15-minute city public real estate; disused properties; divestment; urban walkability; urban accessibility; Cagliari; Sardinia; Italy; 15-minute city
►▼ Show Figures 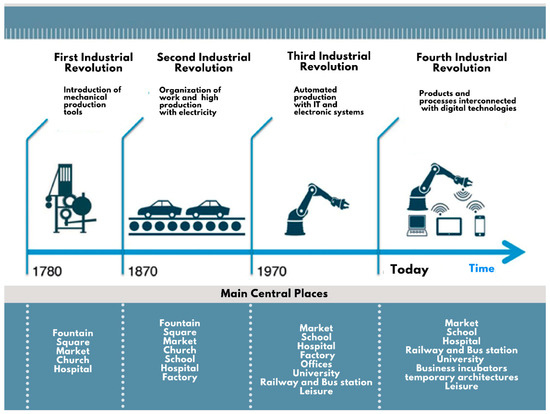