Digital Transformation in Banking: A Managerial Perspective on Barriers to Change
Previous Article in Special Issue

A three-year study, designed to record the level of potentially toxic elements within the urban complex in the city of Volos, Greece, was carried out between 2018 and 2020. For the needs of the aforementioned study, 62 surface (0–15 cm) soil samples were collected each year (i.e., 186 samples in total) from an urban area of 3.65 km2, and the average value of pseudo-total metal concentration was measured. Soil pollution indices, such as the contamination factor (CF) and the geo-accumulation index (Igeo), were estimated regarding each of the metals of interest. The respective thematic maps were constructed, and the spatial variability of the contamination degree was displayed. Higher values of the CF and Igeo were obtained near the heavy traffic roads and beside the railway station, the bus stations, and the commercial port. The maps based on the pollution indices, along with the database that was constructed using the appropriate mathematical tools of geostatistical analysis, may be a useful tool for monitoring, prediction, and continuous verification of contamination in the urban soils of Volos city. View Full-Text
Keywords: contamination indices; geo-accumulation factor; heavy metals; GIS contamination indices; geo-accumulation factor; heavy metals; GIS
►▼ Show Figures 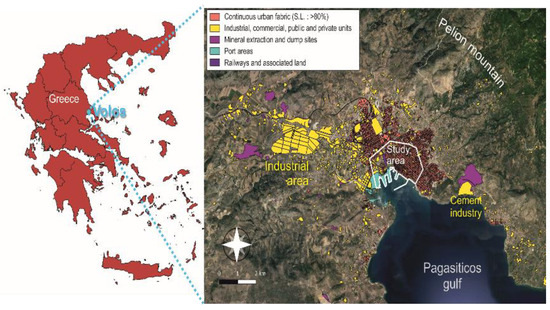