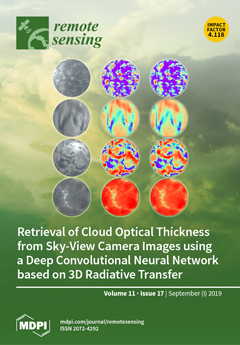 Cover Story (view full-size image): Observation of the spatial distribution of cloud optical thickness (COT) is useful for the prediction and diagnosis of photovoltaic power generation. Using deep learning techniques, a convolutional neural network (CNN) has been trained based on synthetic spectral radiance data generated using a 3D atmospheric radiative transfer model, which enables the quick estimation of the COT distribution from the image of a ground-mounted radiometrically calibrated digital camera. The CNN retrieves the COT spatial distribution using spectral features and spatial contexts. Evaluation of the method using synthetic data and a comparison with the existing method shows promising results. Shown on the cover page are (left) synthetic camera images, (middle) ground truth COT, and (right) COT estimated by CNN. View this paper.
Previous Issue
Volume 11, August-2
Next Issue
Volume 11, September-2
We use cookies on our website to ensure you get the best experience. Read more about our cookies here.
Accept
We have just recently launched a new version of our website. Help us to further improve by taking part in this short 5 minute survey here. here.
Never show this again