The TanDEM-X (TDX) mission launched by the German Aerospace Center delivers unprecedented global coverage of a high-quality digital elevation model (DEM) with a pixel spacing of 12 m. To examine the relationships of terrain, vegetation, and building elevations with hydrologic, geologic, geomorphologic, or ecologic factors, quantification of TDX DEM errors at a local scale is necessary. We estimated the errors of TDX data for open ground, forested, and built areas in a coastal urban environment by comparing the TDX DEM with LiDAR data for the same areas, using a series of error measures including root mean square error (RMSE) and absolute deviation at the 90% quantile (LE90). RMSE and LE90 values were 0.49 m and 0.79 m, respectively, for open ground. These values, which are much lower than the 10 m LE90 specified for the TDX DEM, highlight the promise of TDX DEM data for mapping hydrologic and geomorphic features in coastal areas. The RMSE/LE90 values for mangrove forest, tropical hardwood hammock forest, pine forest, dense residential, sparse residential, and downtown areas were 1.15/1.75, 2.28/3.37, 3.16/5.00, 1.89/2.90, 2.62/4.29 and 35.70/51.67 m, respectively. Regression analysis indicated that variation in canopy height of densely forested mangrove and hardwood hammock was well represented by the TDX DEM. Thus, TDX DEM data can be used to estimate tree height in densely vegetated forest on nearly flat topography next to the shoreline. TDX DEM errors for pine forest and residential areas were larger because of multiple reflection and shadow effects. Furthermore, the TDX DEM failed to capture the many high-rise buildings in downtown, resulting in the lowest accuracy among the different land cover types. Therefore, caution should be exercised in using TDX DEM data to reconstruct building models in a highly developed metropolitan area with many tall buildings separated by narrow open spaces. View Full-Text
Keywords: TDX; LiDAR; DTM; DSM; horizontal accuracy; vertical accuracy; error measures TDX; LiDAR; DTM; DSM; horizontal accuracy; vertical accuracy; error measures
►▼ Show Figures 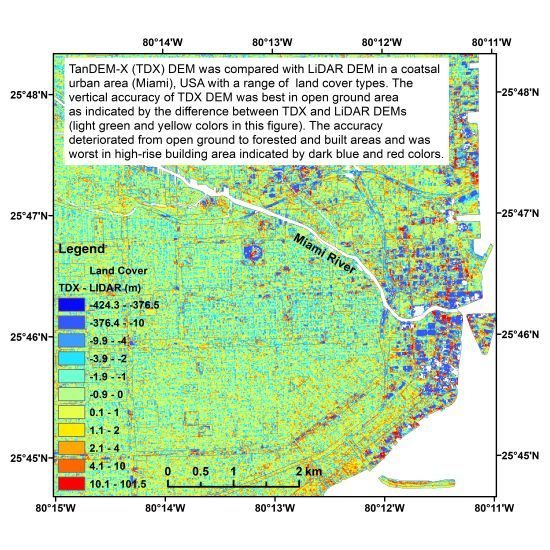