Underground mining can produce subsidence phenomena, especially if orebodies are surficial or occur in soft rocks. In some countries, illegal mining is a big problem for environmental, social and economic reasons. However, when unauthorized excavation is conducted underground, it is even more dangerous because it can produce unexpected surficial collapses in areas not adequately monitored. For this reason, it is important to find quick and economic techniques able to give information about the spatial and temporal development of uncontrolled underground activities in order to improve the risk management. In this work, the differential interferometric synthetic aperture radar (DInSAR) technique, implemented in the SUBSOFT software, has been used to study terrain deformation related to illegal artisanal mining in Ecuador. The study area is located in Zaruma (southeast of El Oro province), a remarkable site for Ecuadorian cultural heritage where, at the beginning of the 2017, a local school collapsed, due to sinkhole phenomena that occurred around the historical center. The school, named “Inmaculada Fe y Alegria”, was located in an area where mining activity was forbidden. For this study, the surface deformations that occurred in the Zaruma area from 2015 to 2019 were detected by using the Sentinel-1 data derived from the Europe Space Agency of the Copernicus Program. Deformations of the order of five centimeters were revealed both in correspondence of known exploitation tunnels, but also in areas where the presence of tunnels had not been verified. In conclusion, this study allowed to detect land surface movements related to underground mining activity, confirming that the DInSAR technique can be applied for monitoring mining-related subsidence. View Full-Text
Keywords: mining subsidence; DinSAR; risk management mining subsidence; DinSAR; risk management
►▼ Show Figures 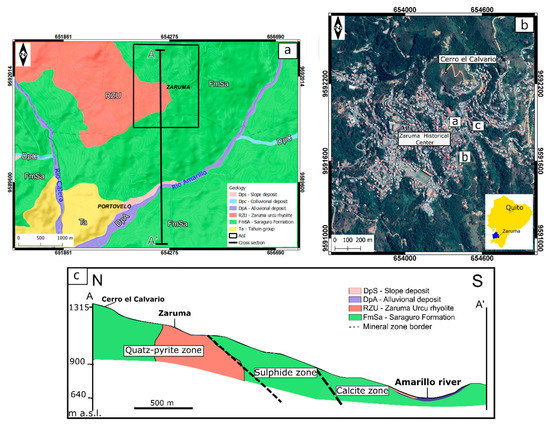