Spatial-Temporal Distribution Analysis of Industrial Heat Sources in the US with Geocoded, Tree-Based, Large-Scale Clustering

Heavy industrial burning contributes significantly to the greenhouse gas (GHG) emissions. It is responsible for almost one-quarter of the global energy-related CO2 emissions and its share continues to grow. Mostly, those industrial emissions are accompanied by a great deal of high-temperature heat emissions from the combustion of carbon-based fuels by steel, petrochemical, or cement plants. Fortunately, these industrial heat emission sources treated as thermal anomalies can be detected by satellite-borne sensors in a quantitive way. However, most of the dominant remote sensing-based fire detection methods barely work well for heavy industrial heat source discernment. Although the object-oriented approach, especially the data clustering-based approach, has guided a novel method of detection, it is still limited by the costly computation and storage resources. Furthermore, when scaling to a national, or even global, long time-series detection, it is greatly challenged by the tremendous computation introduced by the incredible large-scale data clustering of tens of millions of high-dimensional fire data points. Therefore, we proposed an improved parallel identification method with geocoded, task-tree-based, large-scale clustering for the spatial-temporal distribution analysis of industrial heat emitters across the United States from long time-series active Visible Infrared Imaging Radiometer Suite (VIIRS) data. A recursive k-means clustering method is introduced to gradually segment and cluster industrial heat objects. Furthermore, in order to avoid the blindness caused by random cluster center initialization, the time series VIIRS hotspots data are spatially pre-grouped into GeoSOT-encoded grid tasks which are also treated as initial clustering objects. In addition, some grouped parallel clustering strategy together with geocoding-aware task tree scheduling is adopted to sufficiently exploit parallelism and performance optimization. Then, the spatial-temporal distribution pattern and its changing trend of industrial heat emitters across the United States are analyzed with the identified industrial heat sources. Eventually, the performance experiment also demonstrated the efficiency and encouraging scalability of this approach. View Full-Text
Keywords: industrial heat sources; clustering; parallel computing; VIIRS; heavy industrial layout industrial heat sources; clustering; parallel computing; VIIRS; heavy industrial layout
►▼ Show Figures 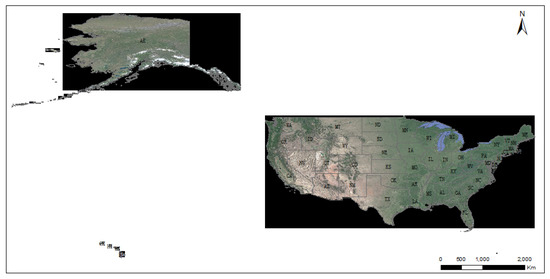