The future of islands has been the subject of international concern, scientific debate and media interest in the last decade. As a result of global warming and sea level rise, increasingly more research and speculations about the morphology and positions of island coastlines have been produced. However, some assumptions are not well documented due to the lack of large-scale research and data support. This paper contributes to filling this gap by extracting and assessing coastline changes on Southeast Asian islands overall during 2000–2015 based on Landsat remote sensing images. The results are as follows: ① the coastline, defined by the mean high water line (MHWL), of Southeast Asia remained relatively stable but showed considerable variability in space, especially in estuaries, bays and straits. ② A total of 9035 islands were extracted, among which approximately 10% of islands witnessed locational changes in coastlines, resulting in net reductions of nearly 86 km2 in area and 50,000 km in centroid displacement. Additionally, the coastline length increased by 532 km from 2000 (148,508 km) to 2015 (149,040 km). Natural coastlines decreased by 2503 km, while artificial coastlines increased by 3035 km. Among the total coastlines, 11% changed: 5% exhibited deposition, while 6% experienced retreat. ③ The temporal and spatial changes in coastlines were the result of interactions between natural processes and human activities. Climatic and environmental changes had wide impacts, while human activities caused more dramatic local changes. In addition, the sizes, shapes and landforms of the islands played significant roles in coastline changes. ④ Coastal erosion and expansion often coexisted in dynamic equilibrium under the influence of coastal hydrodynamics, such as cyclical tides and near-shore sediment transport. Our findings reveal spatial–temporal variations in island coastlines in Southeast Asia from 2000–2015 and provide critical information for the current study of islands. This work has great significance for the study of global climate change impacts and the integrated management of island coastal zones. View Full-Text
Keywords: island; Southeast Asia; coastline change; spatial variability; coastal risk; climate change island; Southeast Asia; coastline change; spatial variability; coastal risk; climate change
►▼ Show Figures 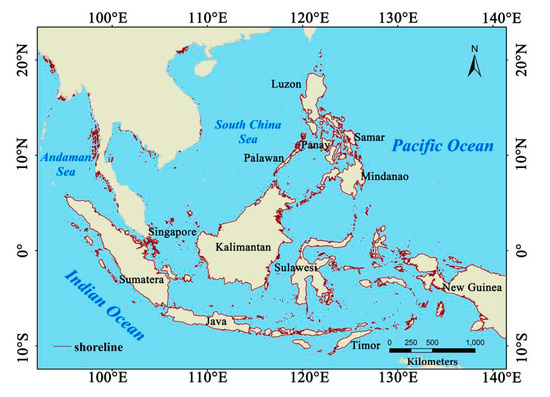