Variable Magnitude and Intensity of Strombolian Explosions: Focus on the Eruptive Processes for a First Classification Scheme for Stromboli Volcano (Italy)

Stromboli is an active insular volcano located in the Southern Tyrrhenian Sea and its recent volcanic activity is mostly confined within the Sciara del Fuoco (SdF, hereafter), a 2-km wide subaerial–submarine collapse scar, which morphologically dominates the NW flank of the edifice. In August-November 2014, an effusive eruption occurred along the steep SdF slope, with multiple lava flows reaching the sea. The integration of multisensor remote sensing data, including lidar, photogrammetric, bathymetric surveys coupled with SAR amplitude images collected before and after the 2014 eruption enabled to reconstruct the dynamics of the lava flows through the main morphological changes of the whole SdF slope. Well-defined and steep-sided ridges were created by lava flows during the early stages of the eruption, when effusion rates were high, favoring the penetration into the sea of lava flows as coherent bodies. Differently, fan-shaped features were emplaced during the declining stage of the eruption or in relation to lava overflows and associated gravel flows, suggesting the prevalence of volcaniclastic breccias with respect to coherent lava flows. The estimated volume of eruptive products emplaced on the SdF slope during the 2014 eruption, accounts for about 3.7 × 106 m3, 18% of which is in the submarine setting. This figure is different with respect to the previous 2007 eruption at Stromboli, when a large lava submarine delta formed. This discrepancy can be mainly related to the different elevation of the main vents feeding lava flows during the 2007 eruption (around 400 m) and the 2014 eruption (around 650 m). Besides slope accretion, instability processes were detected both in the subaerial and submarine SdF slope. Submarine slope failure mobilized at least 6 × 105 m3 of volcaniclastic material, representing the largest instability event detected since the 2007 lava delta emplacement. View Full-Text
Keywords: lava delta; slope failure; repeated bathymetric surveys; digital elevation models; LiDAR; PLÉIADES; morphological monitoring lava delta; slope failure; repeated bathymetric surveys; digital elevation models; LiDAR; PLÉIADES; morphological monitoring
►▼ Show Figures 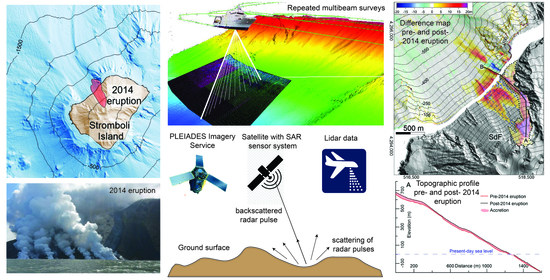