The study included a number of agricultural fields within the Elora Research Station (ERS). The ERS is located south of the village of Elora (49°38′ N, 80°24′ W), Ontario, Canada and is operated by the University of Guelph (Figure 1).
The soil of the area belongs to the Luvisolic order, which is gray-brown soil typically developed under deciduous or mixed forest vegetation according to the Canadian System of Soil Classification [41]. Among the approximately 650 hectares of the Elora station, numerous fields are under cultivation for crop research. The major crops include cereals (corn, wheat, and barley), oilseeds (soybeans and canola), and edible beans (white and coloured). However, for this study, we focused on the non-growing season with field measurements conducted in May and November 2015. The field data were collected as near to coincident with RADARSAT-2 acquisition as possible (generally within a maximum of three days of the overpass). Fields were selected based on the presence of little or no vegetation/residue cover and were selected to provide a range of roughness variations in tillage conditions. The aim was to eliminate the effect of vegetation on the parameterization of surface roughness since the ability of LiDAR to scan the soil surface is hindered by vegetation. Moreover, in the presence of crops, the pin profiler mistakenly measures vegetation as surface height, affecting the comparison of obtained surface roughness parameters by LiDAR and the pin profiler. Please refer to Chabot et al. [13] for field photos taken during the experiment (particularly Figure 2 in [13]).

For each field, three scans with an approximate distance of 25 m were taken using TLS. The LiDAR point clouds were taken using a Leica C10 ScanStation (Leica, Heerbrugg, Switzerland). The scans were collected using a full 360° horizontal and 270° vertical field of view. Within the range of 1–50 m, the collected points have 6 mm positional accuracy and a 4 mm distance accuracy, as reported in [30]. The three scans were co-registered using tie-points to provide a larger sampling region. The TLS was conducted before the pin profiler to avoid disturbing the surface due to the compression effect by the pin profiler and disruption by people accessing the field. Accurate geographic coordinates were captured for each scan using a real-time kinematic global positioning system (GPS). LiDAR point clouds were analyzed in a plug-in tool named Roughness from Point Cloud Profiles ([13]; RPCP) and implemented in Whitebox Geospatial Analysis Tools (GAT) software version 3.4.0 [42] to extract the RMSH and ʅ in interquartile ranges (IQRs) for each field. Within the RPCP, the distance between profiles and profile sampling were set at 0.5 m and 1 cm, respectively, to match pin profiler measurements. The de-trending polynomial was applied to remove the effects of a slope from the roughness measurements, and the roughness statistic was derived in multi-azimuth mode, to collect measurements along profiles every 0.5° from 0° to 360° azimuth.
Pin profiler measurements were taken in the centre of three TLS scans using a 1-m pin profiler (with pins 1-cm apart) in the east–west and north–south directions as described by Chabot et al. [13]. The surface’s profile was recorded with a camera mounted on the pin profiler and then processed using a MATLAB graphical user interface to extract surface elevation points and calculate roughness statistics [13]. To obtain RMSH and correlation length statistics from the pin profiler, three 1 m profiles in each azimuth were added together (e.g., 6 profiles taken per field).

Four RADARSAT-2 images were acquired using fine quad-mode polarization and different incidence angles in May and November 2015, as shown in Table 1. Common polarimetric parameters were selected for analysis and extracted using the steps shown in Figure 2. Some of the common polarimetric parameters extracted included pedestal height, which is a variable that shows the degree of polarization. The larger pedestal height corresponds to multiple and volume scattering, while the smaller pedestal height shows the surface scattering (e.g., [43]). We also used the Cloude–Pottier decomposition variables including the H, α-angle, and A, which describe and classify the scattering mechanism of a target [44]. H (entropy) measures the randomness of the scattering and ranges from 0 to 1. Values close to 1 indicate that depolarization has happened and there is no longer a single-scattering mechanism, instead, there should be multiple scattering, while values close to 0 represent the surface scattering. A (anisotropy) measures the importance of the dominant scattering and ranges from 0 to 1. Greater values of A indicate the dominance of one scattering mechanism, while lower values show the contribution of secondary and tertiary scattering. α-angle estimates the dominant scattering source and varies from 0° to 90°. It would be close to 0° for surface scattering, close to 45° for volume scattering, and close to 90° for double-bounce scattering [44].
Image processing and radiometric and geometric corrections were conducted using the Sentinels Application Platform (SNAP) software version 7.0.3 (freely available software developed by the European Space Agency (ESA) [45]. First, the DN values of raw products were converted to σ° using radiometric calibration. Then, speckle filtering was applied using a 5 × 5 Boxcar filter to reduce noise. Finally, the ground ranged images were geometrically corrected using the terrain correction algorithm [46]. However, some images still suffered from the spatial displacement. The orthorectification was then performed manually in ArcMap (10.6) using the georeferencing tool, with reference targets selected from georeferenced images, field polygons files, and road vector data. The final images had a root mean square error (RMSE) of less than two pixels. All final RADARSAT-2 images had a pixel spacing of 9.45 m. For polarimetric decomposition extraction, a T3 matrix generation was performed before terrain correction [47,48]. The linear intensity and polarimetric variables for the pixels of each field were extracted by creating a mask for each field. Over the region where the TLS station was measured, a 20-m buffer mask was created for each field, regardless of the actual size of the field. Then, each mask was overlaid on SAR images in SNAP, and polarimetric variables were extracted by exporting mask pixels. The average and mean value of parameters were then calculated for the subset region.

Descriptive statistical analysis was conducted using SPSS software (version 26) to check the linearity and normality of data. According to de Winter et al. [49], the Spearman correlation is more robust than, and preferred to, the Pearson correlation in small sample size datasets with non-normal distribution and the presence of outliers. For this study, the Spearman rank correlation (p value) was conducted to analyze the association between mean RMSH measured by TLS and mean radar parameters for different orientations, and results were shown using a polar graphical approach. These polar charts were prepared using SAR parameters obtained from pixels within the fields where the TLS data were obtained.
The Spearman correlation was also used to compare pin measurements at the east–west and north–south orientations and the field average results obtained with the TLS method with the SAR polarimetric variables. The aim was to determine the differences in results between pin profiler and TLS, and how much each method may contribute to the mischaracterization of surface roughness. The RMSH (collected using pin boards and the TLS approach) and the associate polarimetric variables were averaged within the region of the field covered by the TLS. The Spearman correlations reported used the field scale data (15 fields total).

3.1. Surface Roughness Characteristics with Respect to the Orientation

The value of RMSH varied between the November and May surface acquisitions, as summarized in Table 2. In May, greater heterogeneity was observed with larger variation of mean RMSH and ʅ in all orientations among fields. In November, several fields were rougher with respect to the absolute value of mean RMSH; however, there was a lower range in roughness variations observed among fields.
Three representative fields with different roughness situations were selected to demonstrate the sensitivity of surface roughness characteristics with respect to the orientation using a polar graph (Figure 3). The selection was based on the variation of mean RMSH and ʅ and the difference between the highest and the lowest RMSH value in the field. In general, the shape of the polar graphs depends on the main elements of roughness, such as the direction of tillage, crop residue, and soil clods [13].
Figure 3a (TLS completed during the November study period) represents a relatively homogenous rough field as it has a low variability of surface roughness across all orientations. In addition to some low directional variability of surface roughness, this area had the smallest IQRs in the scanned area of the field. Moreover, the difference between the highest RMSH and the lowest RMSH was small. This indicates that this field was bare, with no significant directional tillage and no distinct ridges or furrows, but with the soil clod orientation having no directional preference.
Figure 3b, with the lowest values of RMSH, represents a relatively smooth field. As this figure shows, the RMSH and ʅ had large variability across the orientations, in particular for the third quartile. The RMSH had an abrupt drop close to 45° and 225°; however, the ʅ increased in these azimuths. The sharper shape of the ʅ was due to its higher directional sensitivity compared to the RMSH [10]. Moreover, the difference between the lowest and the highest RMSH was considerable. It can be concluded that the sharp decrease in the RMSH, which was close to 45° and 225°, resulted from the tillage direction, which aligned with the measuring of surface roughness parameters. In addition, in other parts of the field, the crop residue and soil clods contributed to the variation of surface roughness.
Similarly to the previous field, Figure 3c shows the large variability of surface roughness parameters across the orientation. However, over the whole field, the variation of this area was larger and more distinct than that of Figure 3b. Moreover, the difference between the lowest and the highest RMSH was large. It can be said that the surface roughness elements (tillage direction, crop residue, and soil clods) were more dominant and the alignment was more apparent in this field. In this case, the field was characterized by deeper furrows than those observed at the other study sites.

3.2. Sensitivity of RADARSAT-2 Parameters to the Surface Roughness Parameters 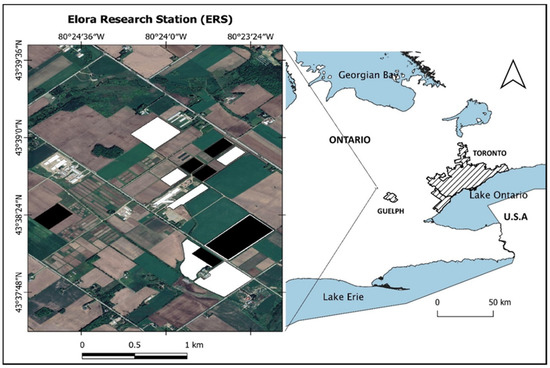 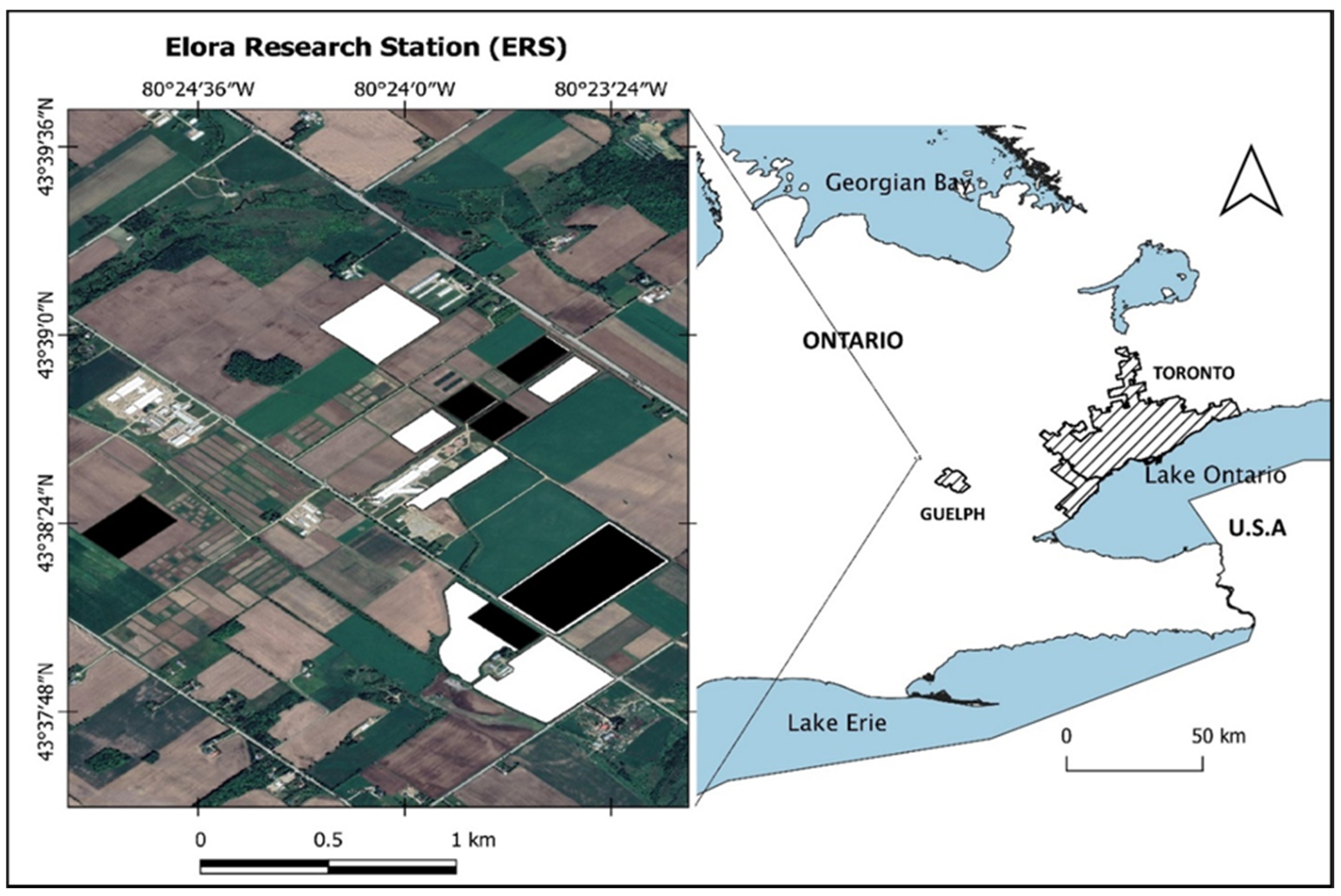 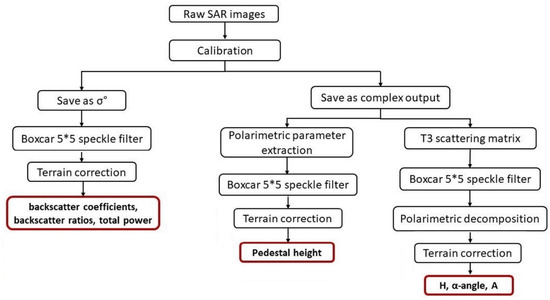 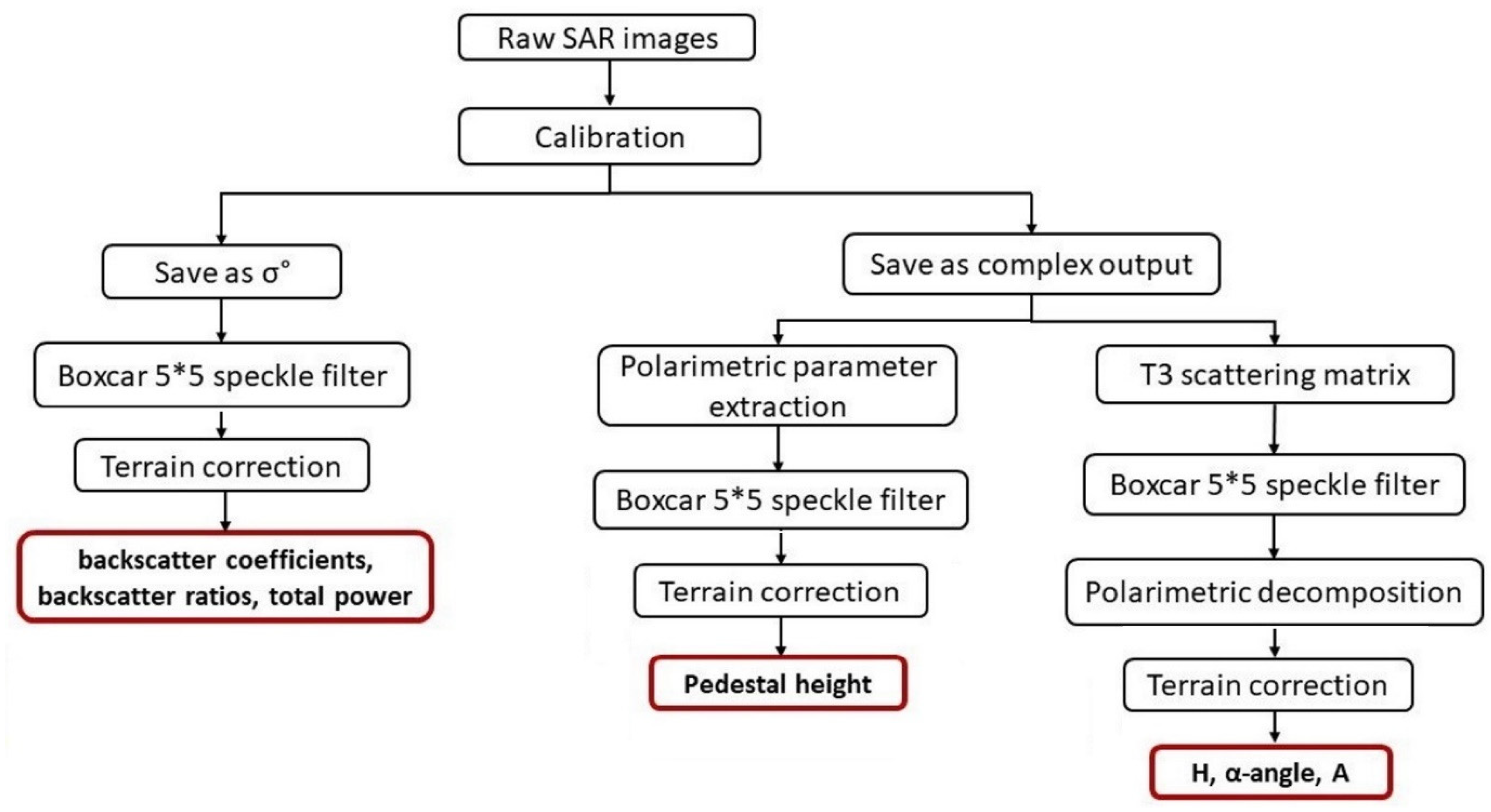 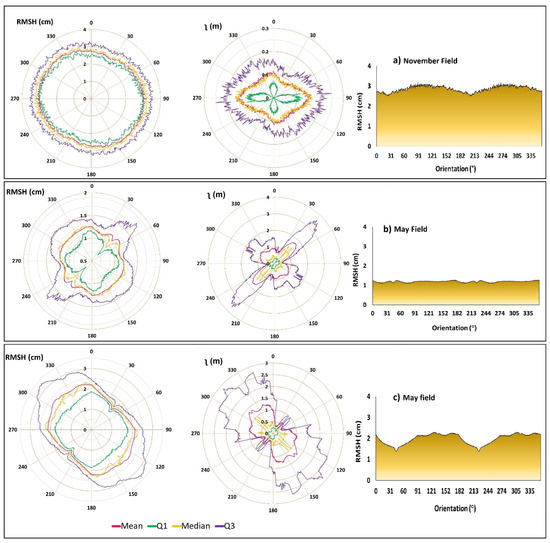 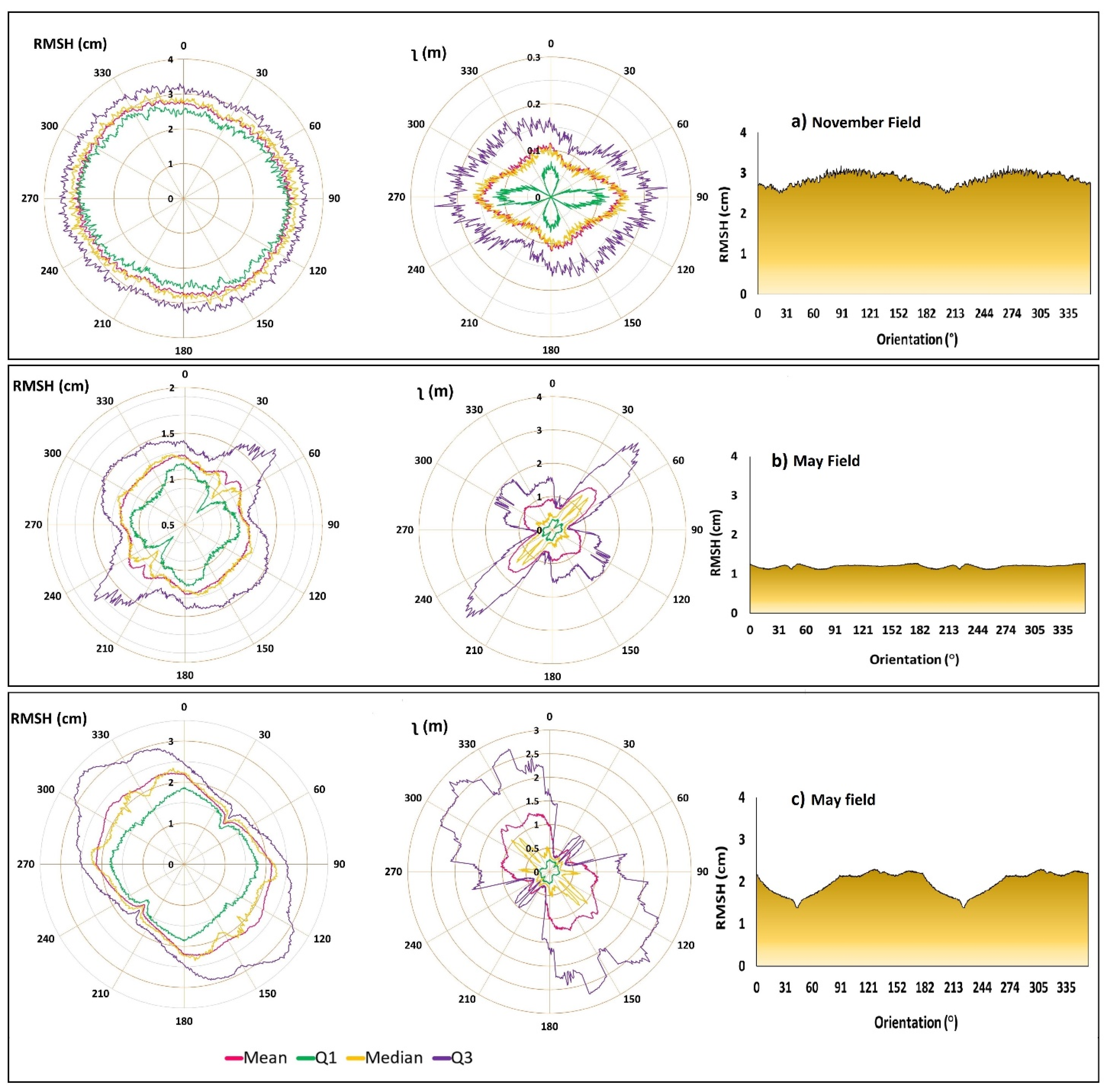 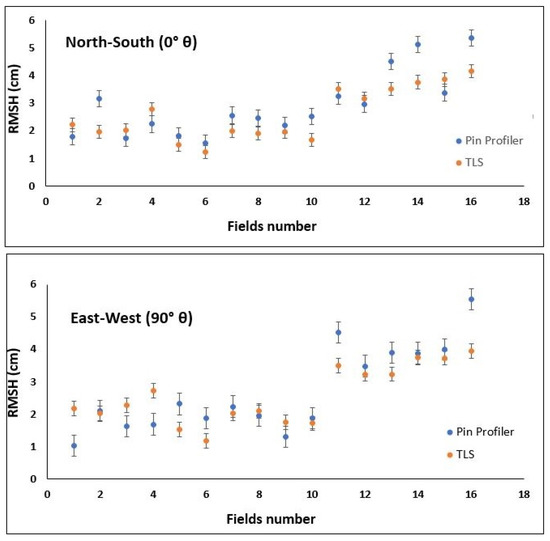 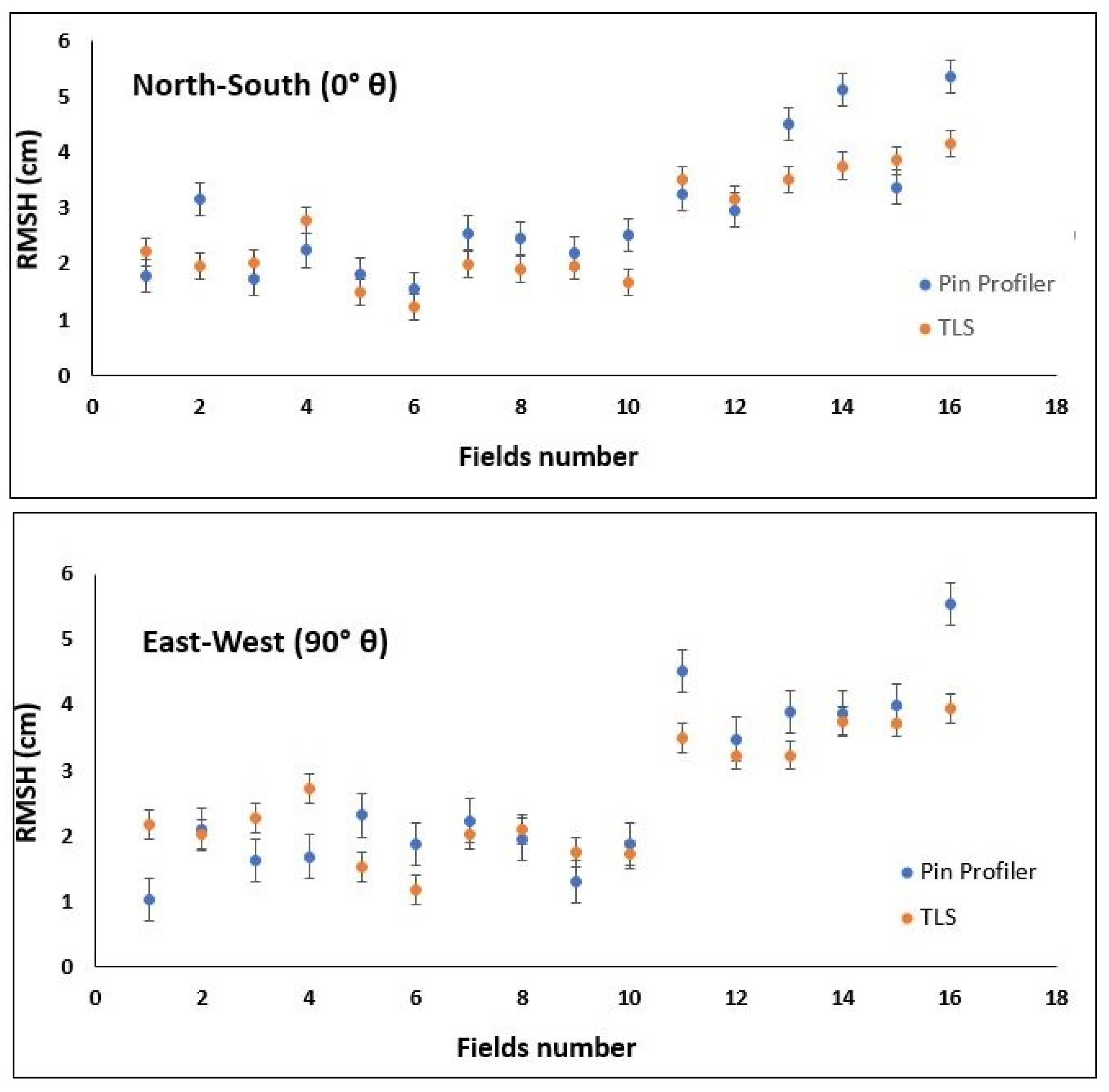 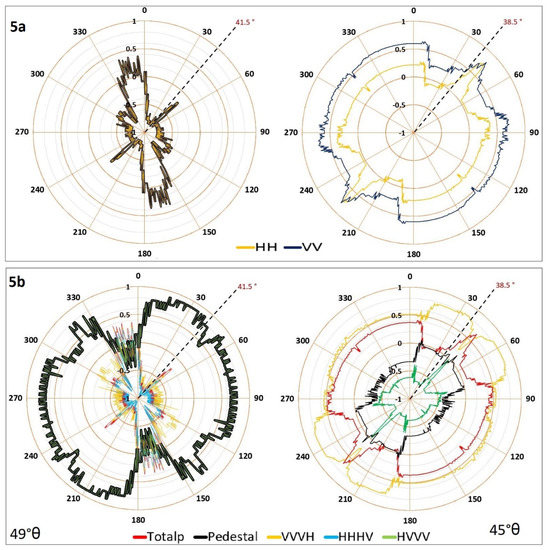 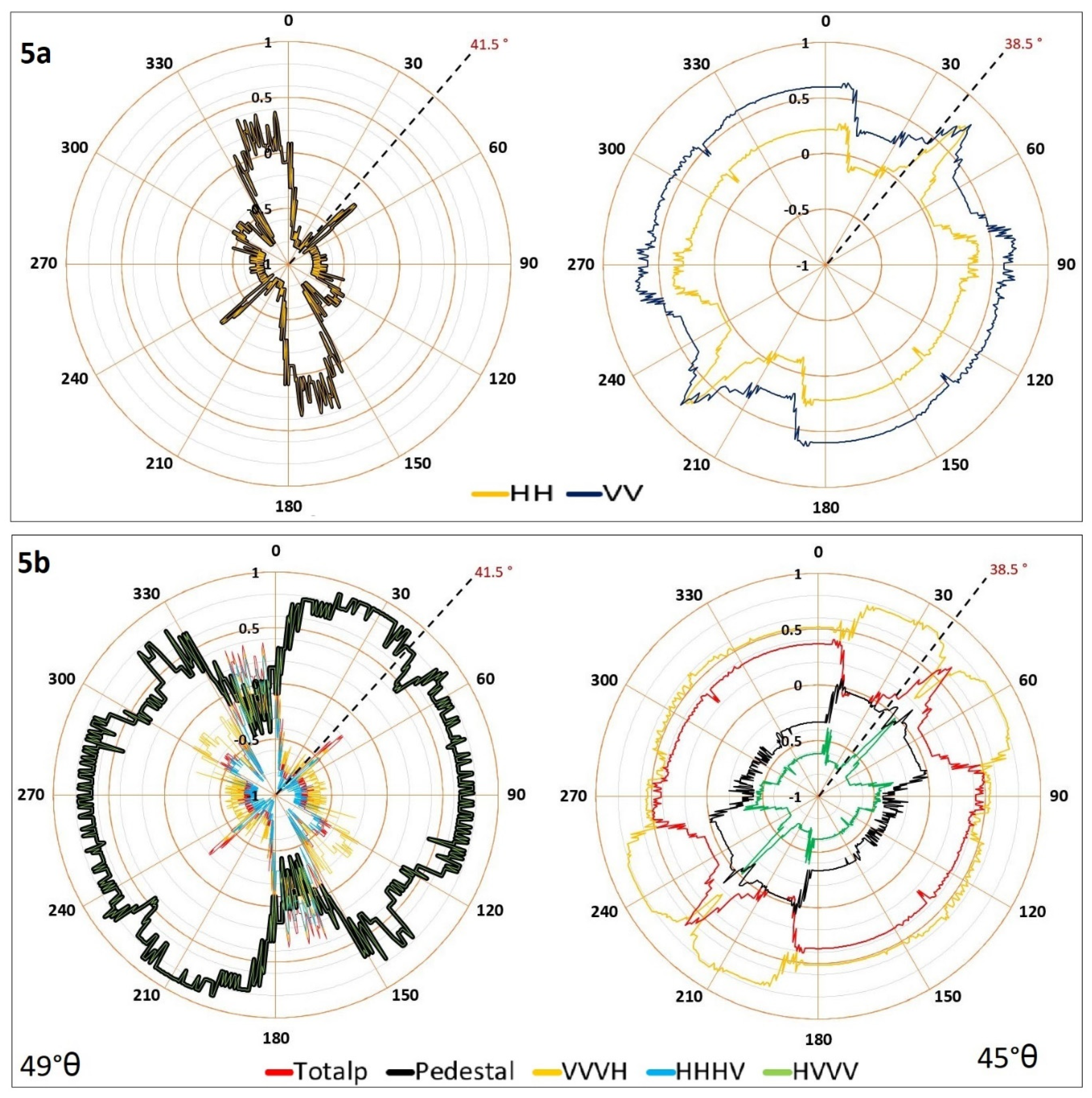