Rupture Kinematics and Coseismic Slip Model of the 2021 Mw 7.3 Maduo (China) Earthquake: Implications for the Seismic Hazard of the Kunlun Fault
Previous Article in Special Issue

GNSS time-series prediction plays an important role in the monitoring of crustal plate movement, and dam or bridge deformation, and the maintenance of global or regional coordinate frames. Deep learning is a state-of-the-art approach for extracting high-level abstract features from big data without any prior knowledge. Moreover, long short-term memory (LSTM) networks are a form of recurrent neural networks that have significant potential for processing time series. In this study, a novel prediction framework was proposed by combining a multi-scale sliding window (MSSW) with LSTM. Specifically, MSSW was applied for data preprocessing to effectively extract the feature relationship at different scales and simultaneously mine the deep characteristics of the dataset. Then, multiple LSTM neural networks were used to predict and obtain the final result by weighting. To verify the performance of MSSW-LSTM, 1000 daily solutions of the XJSS station in the Up component were selected for prediction experiments. Compared with the traditional LSTM method, our results of three groups of controlled experiments showed that the RMSE value was reduced by 2.1%, 23.7%, and 20.1%, and MAE was decreased by 1.6%, 21.1%, and 22.2%, respectively. Our results showed that the MSSW-LSTM algorithm can achieve higher prediction accuracy and smaller error, and can be applied to GNSS time-series prediction.
Keywords: deep learning; long short-term memory; multi-scale sliding window; GNSS; time series; prediction deep learning; long short-term memory; multi-scale sliding window; GNSS; time series; prediction

The sliding window, usually when dealing with two-dimensional images, is widely used in computer vision processing, such as in the fields of object detection and semantic segmentation. In this study, the concept of the sliding window was applied to data preprocessing. because GNSS coordinate time series are one dimensional, the sliding window was reduced to one dimension to construct the data sets. Traditional data preprocessing uses a single-scale sliding window to establish the initial data, as shown in Figure 3, among which the and are unique. The current LSTM research on time series uses a single-scale sliding window, or other transformations of the data. However, the information captured by a single scale at each time has a fixed scale, and this method of constructing a dataset is not perfect. The construction of the dataset may determine the accuracy of the model training. In this study, we proposed the method of a multiscale sliding window to input different scale information into the corresponding network, form a unified dimension, and integrate the existing research into a unified processing framework.
The GNSS coordinate time series are obtained and arranged in a unified dimension according to the time sequence: where is the length of . The interval of the GNSS time series should a adopt uniform dimension, such as seconds, minutes, hours, days, weeks, months, or years. The construction the of multiscale sliding window is undertaken as follows:
Assume that the length of the front portion in the ith sliding window is , and the length of the back portion is . At each time, one unit is moved to sequentially construct the data, and the following conditions are required . The data formats are as follows:
In the multiscale mode, , where represents a total of scales. , , …, are not equal because it would be meaningless to construct duplicate data sets. However, , , and are equal, which is convenient for the final result of the weighting calculation.
The constructed data set is shown in Equation (9) and Figure 4:
Figure 4 is a schematic diagram of K sliding windows of different scales. It can be seen that the sizes of the red sliding windows are different at different scales, and the sizes of the blue sliding windows are the same.
Thus, an MSSW-LSTM algorithm for GNSS time-series prediction was proposed. The overall processing flow of MSSW-LSTM is shown in Figure 5. First, the GNSS station coordinate time series is obtained, and different datasets are constructed using the multiscale window. Following the construction of the datasets, the corresponding LSTM subnetworks are established for each data set according to the actual situation of the data set.
Each LSTM sub network has its own weight matrix after training, adjustment, and optimization. The trained parameters are saved, and the model of each subnetwork is used for prediction. The prediction results of each subnetwork (1) , subnetwork (2) , …, sub network (k) are then obtained.
The final prediction value is the weighted value of each subnetwork prediction result, and the calculation formula is shown in Equation (10): where , ,…, and are the weights of the prediction results from each subnetwork. The sum of all weight values should be 1, as shown in Equation (11).
In general, if there is little difference between the subnetworks, the weight value of each subnetwork should be the same, as shown in Equation (12).
It should be noted that the MSSW-LSTM method has significant flexibility. For example, LSTM networks may be the same or different, and may consistent of a single layer or multiple layers. This flexibility is beneficial for researchers, who are able to select the most appropriate network model according to their own dataset characteristics and utilize the advantages of the network model.

To quantitatively evaluate the prediction accuracy of our proposed model, some indexes are used to calculate the difference between the real value and the predicted value. Here, the root mean square error (RMSE) and the mean absolute error (MAE) are used to evaluate the prediction accuracy [37], and the corresponding formulas are shown as below. where is the number of datasets, and are true values and are predicted values.

The data processing strategy proposed in this paper is shown in Figure 6a, and the main steps of the MSSW-LSTM algorithm are described in Table 1.
Figure 6b shows the specific method of using the MSSW-LSTM algorithm to process the XJSS station. Three sliding windows with different scales were used to preprocess the GNSS time series. Accordingly, three sub-sequence sets were obtained, and three different LSTM networks were then established. For specific processing, please refer to Section 3.2.

By weighted summation of the three groups of prediction results, 294 corresponding MSSW-LSTM prediction results were obtained, as shown in the Figure 10 below.
Figure 10 shows the comparison between the forecast results of MSSW-LSTM (blue) and the actual time series (red). It can be seen that MSSW-LSTM forecast results are consistent with the true values.
To quantitatively evaluate the prediction accuracy of our proposed model, indexes (RMSE and MAE) were used to calculate the difference between the real and predicted values. In the three LSTM experiments, the network model was obtained by training nearly 700 datapoints, and the remaining 294 datapoints were predicted. The statistical results are shown in Table 4, among which the RMSE of LSTM(1), LSTM(2), and LSTM(3) are 3.2292, 4.1424, and 3.9810, respectively, and the MAE of these three experiments are 2.4252, 3.0239, and 3.0679.
We can observe that, although the network model may become more complex, the RMSE and MAE may not necessarily decrease. For example, although LSTM(2) is more complex than LSTM(1), its RMSE value is greater. It is obvious that both RMSE and MAE of MSSW-LSTM reach the best values. Specifically, RMSE is reduced by 2.1%, 23.7%, and 20.1% and MAE is decreased by 1.6%, 21.1%, and 22.2%, respectively.
In theory, through a single network, it is difficult to achieve optimal results even after multiple training runs. However, the MSSW-LSTM algorithm can combine the advantages of multiple networks and the data characteristics at different scales. The principle of this advantage is that the framework adopts the idea of measurement adjustment.

In this study, a new forecasting framework, named MSSW-LSTM, comprising a multiscale sliding window (MSSW) and LSTM, was proposed for predicting GNSS time series. In the data preprocessing stage, the multiscale sliding window is used to form different training subsets, which can effectively extract the feature relationship under different scales, and facilitates mining the deep features of the data. The LSTM network can then effectively avoid the problem of gradient disappearance in the process of parameter solving. The MSSW-LSTM can use multiple LSTM networks to make simultaneous predictions, and obtains final results by weighting.
To verify the effectiveness of the MSSW-LSTM algorithm, 1000 daily solutions of the XJSS station in the Up component were selected for prediction experiments. The results of three groups of controlled experiments showed that the RMSE was reduced by 2.1%, 23.7%, and 20.1%, and MAE was decreased by 1.6%, 21.1%, and 22.2%, respectively. The experimental results showed that the proposed framework has a higher prediction accuracy and a smaller error.
It should be noted that the MSSW-LSTM method has significant flexibility. Researchers can easily construct appropriate subspace subsets formed by multiscale windows according to different data characteristics. In addition, LSTM networks may be the same or different, and may comprise single layer or multiple layers. This feature is beneficial to researchers for the selection of the most appropriate network model according to their own dataset characteristics, and for use of the advantages of the network model. MSSW-LSTM is a general framework for prediction that can be extended to other fields, such as traffic flow prediction, weather forecasting, and air quality forecasting. 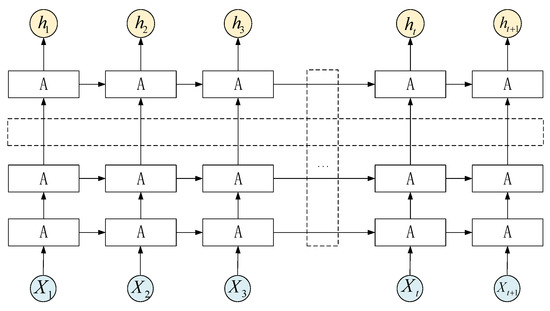 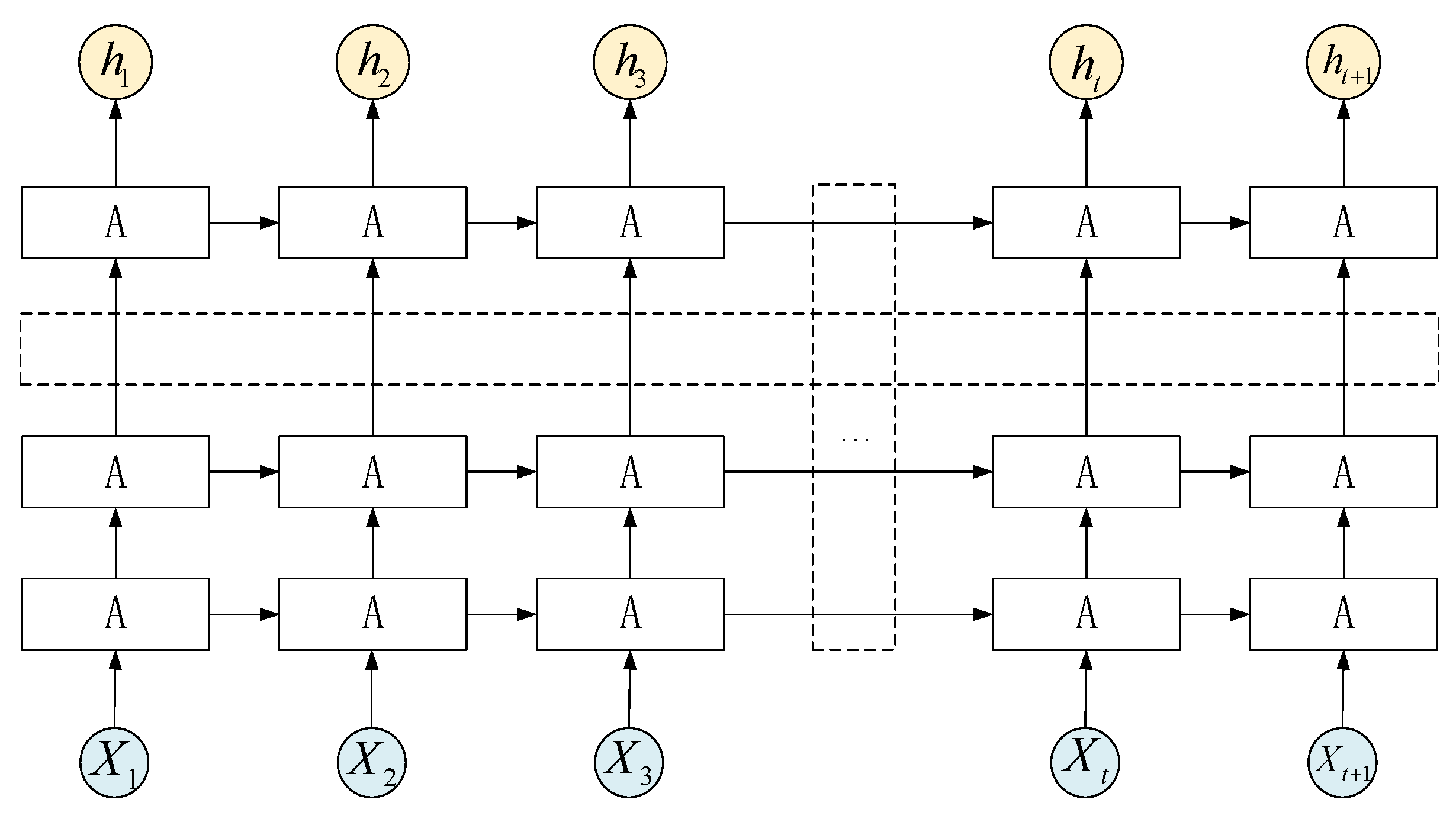 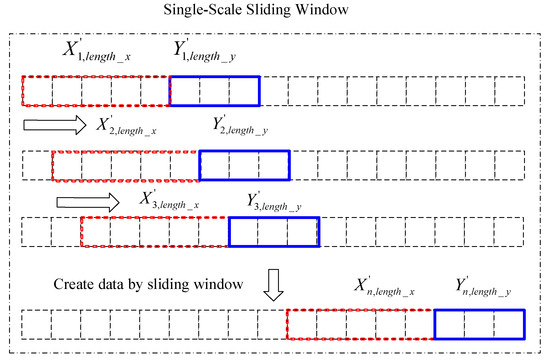 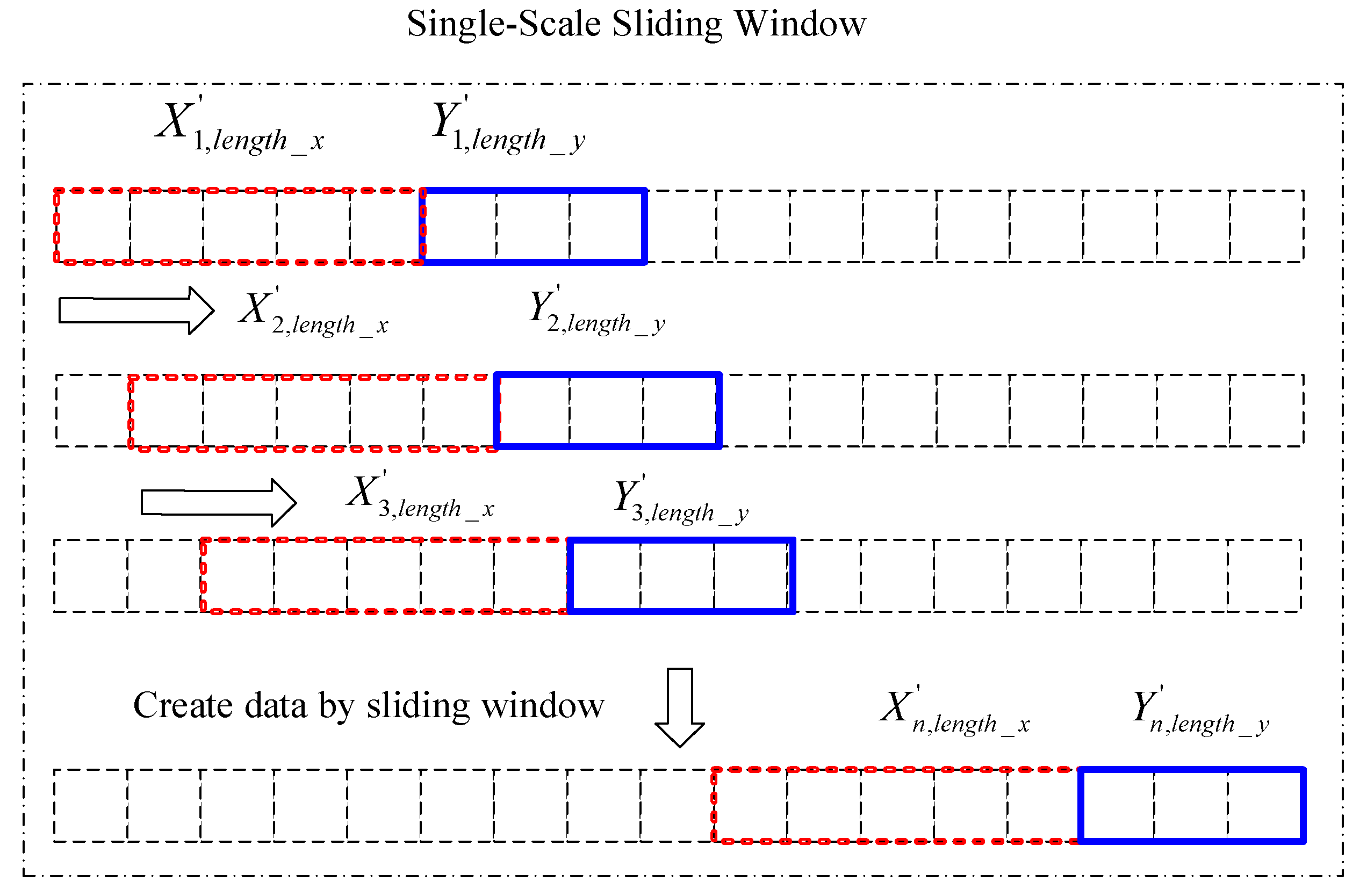 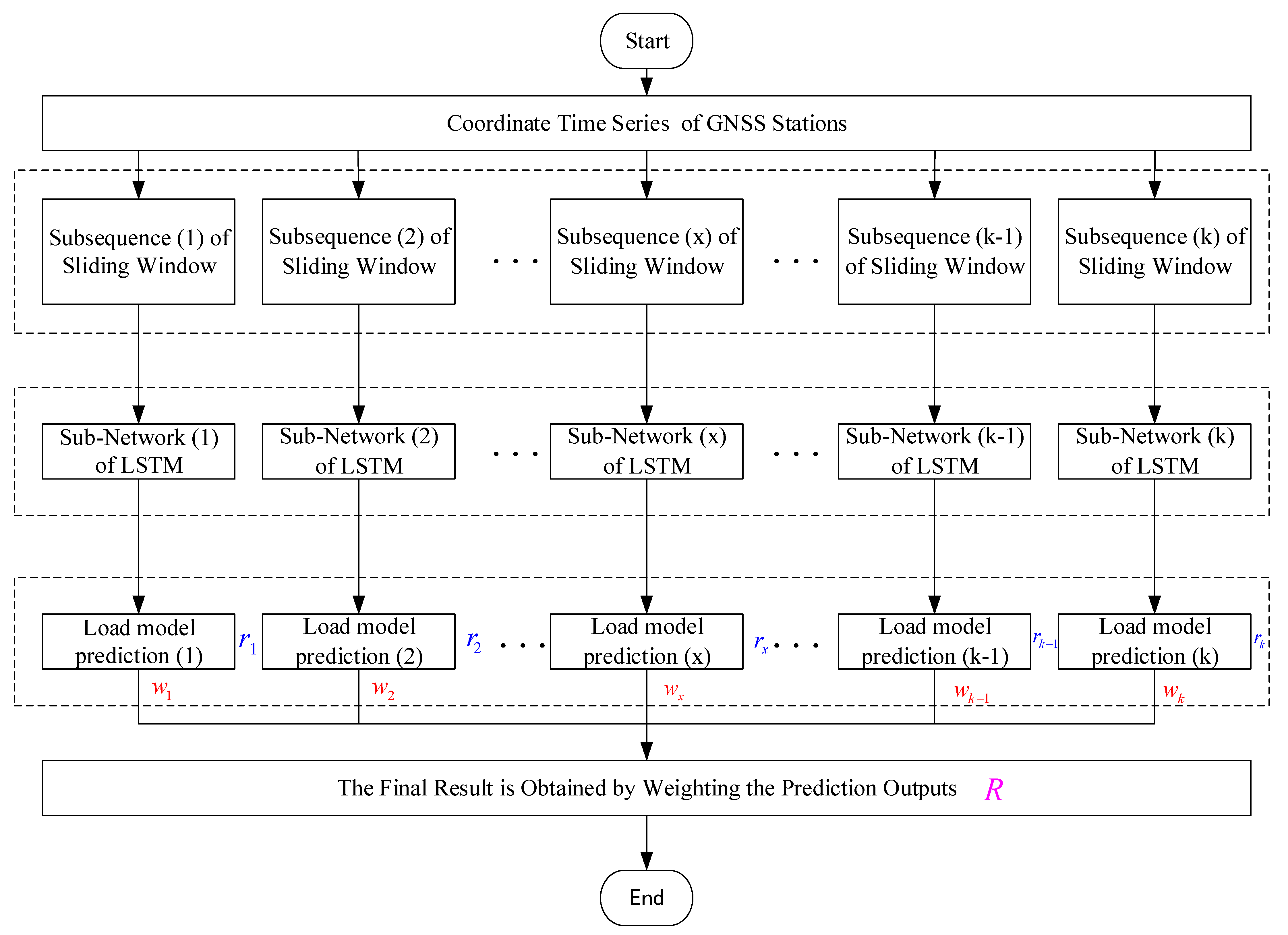 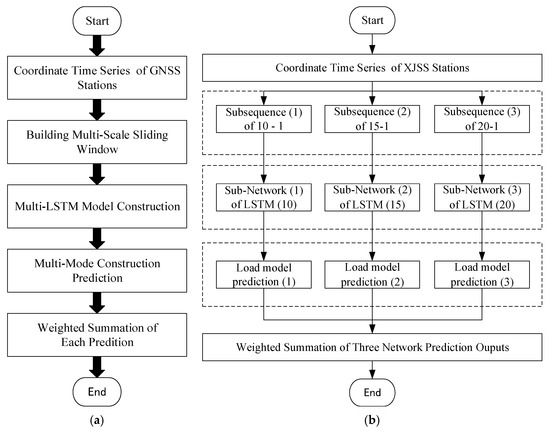 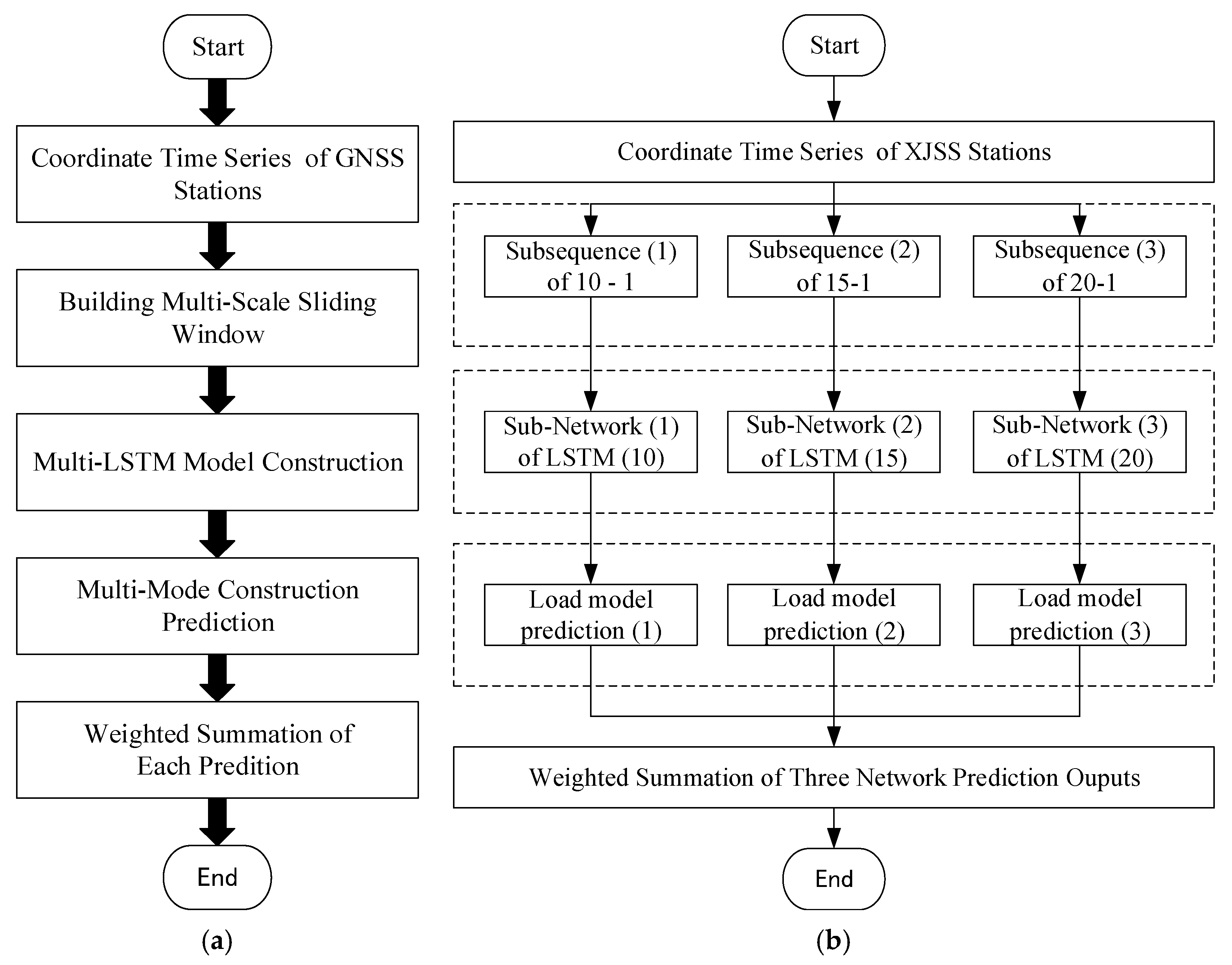 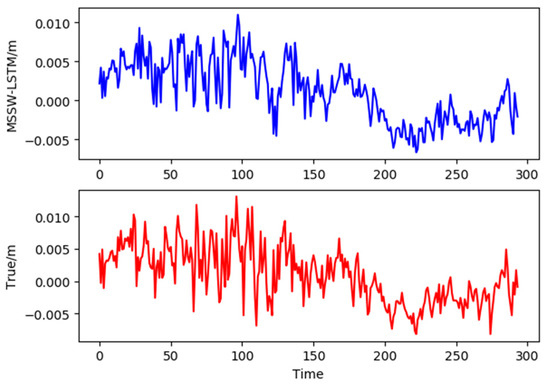 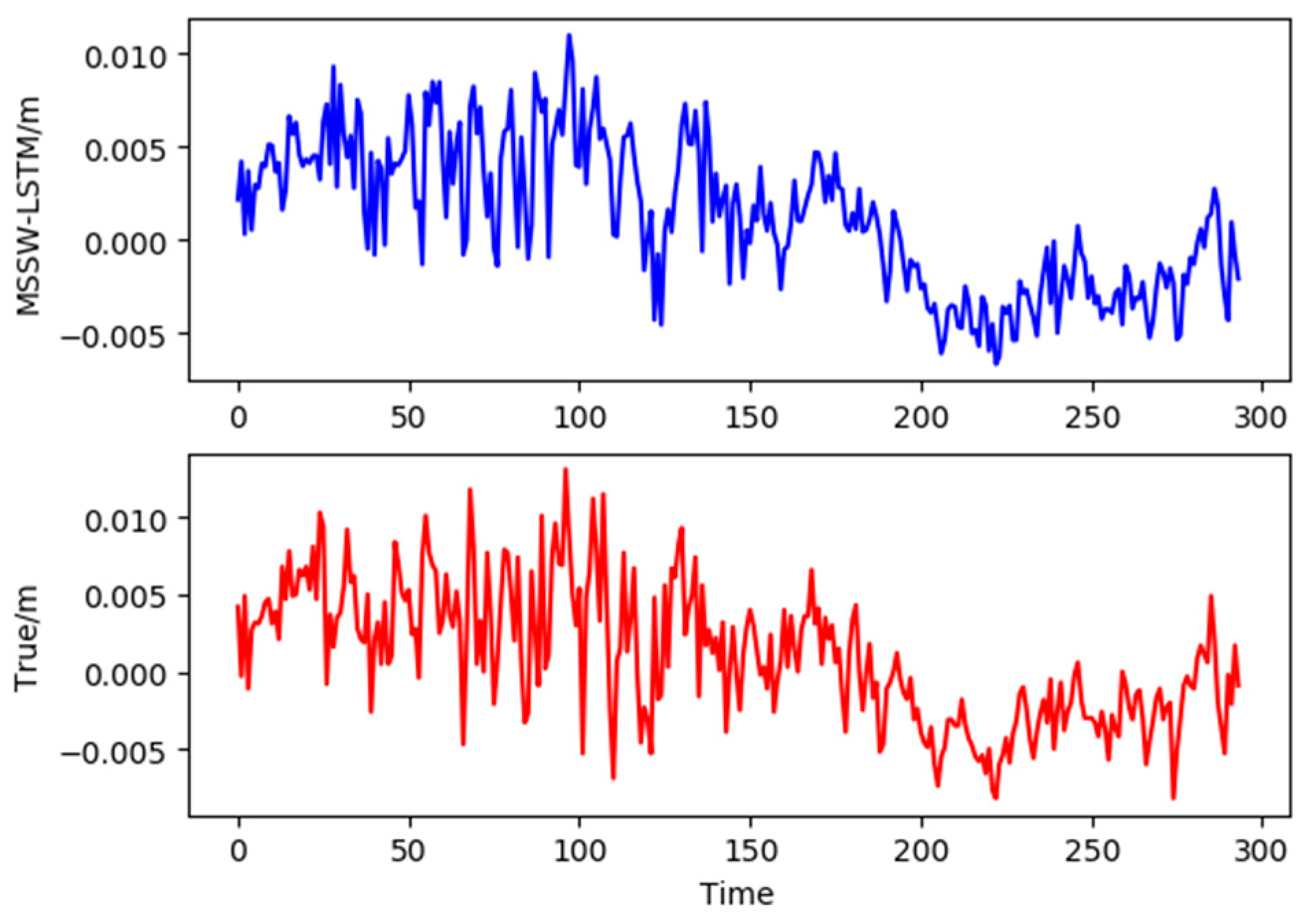