Remote sensing holds great potential for detecting stress in vegetation caused by hydrocarbons, but we need to better understand the effects of hydrocarbons on plant growth and specific spectral expression. Willow (Salix viminalis var. Tora) cuttings and maize (Zea mays var. Lapriora) seedlings were grown in pots of loam soil containing a hydrocarbon-contaminated layer at the base of the pot (crude or refined oil) at concentrations of 0.5, 5, or 50 g·kg−1. Chlorophyll concentration, biomass, and growth of plants were determined through destructive and nondestructive sampling, whilst reflectance measurements were made using portable hyperspectral spectrometers. All biophysical (chlorophyll concentration and growth) variables decreased in the presence of high concentrations of hydrocarbons, but at lower concentrations an increase in growth and chlorophyll were often observed with respect to nonpolluted plants, suggesting a biphasic response to hydrocarbon presence. Absorption features were identified that related strongly to pigment concentration and biomass. Variations in absorption feature characteristics (band depth, band area, and band width) were dependent upon the hydrocarbon concentration and type, and showed the same biphasic pattern noted in the biophysical measurements. This study demonstrates that the response of plants to hydrocarbon pollution varies according to hydrocarbon concentration and that remote sensing has the potential to both detect and monitor the variable impacts of pollution in the landscape. View Full-Text
Keywords: hydrocarbon pollution; hyperspectral remote sensing; vegetation indices; absorption features; reflectance spectra; plant stress hydrocarbon pollution; hyperspectral remote sensing; vegetation indices; absorption features; reflectance spectra; plant stress
►▼ Show Figures 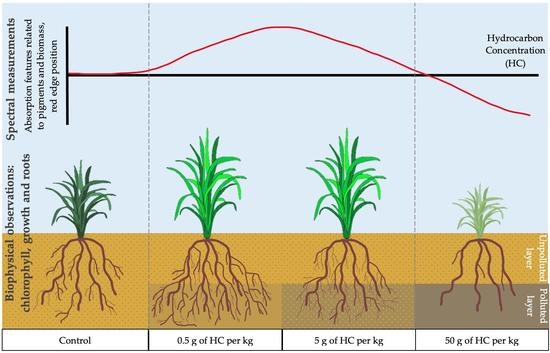 Mark E. J. Cutler
Professor Mark Cutler is a physical geographer whose research has focused on the exploitation of new Earth Observation technologies to monitor and obtain information about the impact of human activities and environmental change in various ecosystems across the World. PhD research at the University of Southampton, which examined fundamental interactions of electromagnetic radiation with vegetation, was followed by research investigating the impact of selective logging and climatic disturbance on tropical forests in SE Asia. More recent work has focused on satellite Earth Observation to observe lake responses to climatic and anthropogenic disturbance, and projects that include a novel blend of physical and social scientists examining refugee livelihoods, environmental degradation, and forced labour and human trafficking. Following lectureships at Manchester Metropolitan University and the University of Newcastle, Professor Cutler joined the University of Dundee as a Senior Lecturer in 2003.

Anthony Glyn Bengough
Professor Glyn Bengough works on the biophysics of plant–soil interactions, and how plants can be used in an environmentally friendly engineering context. Following a PhD at the University of Aberdeen studying the physics of root growth in soil, Glyn has led research on crop root responses to soil physical stresses at The James Hutton Institute (to 2019), and the effects of plants on soil structure and hydraulic properties. At the University of Dundee (appointed 2010), his research focuses primarily on using plants to stabilise soils in the context of both natural and engineered slopes, and on other areas of research where plants may contribute to more sustainable engineering solutions.
Zoom | Orient | As Lines | As Sticks | As Cartoon | As Surface | Previous Scene | Next Scene
We use cookies on our website to ensure you get the best experience. Read more about our cookies here.
Accept
We have just recently launched a new version of our website. Help us to further improve by taking part in this short 5 minute survey here. here.
Never show this again