Analysis of ground movement rates along the coastline and upper sections of the Ventnor landslide complex was carried out utilizing Persistent Scatterer Interferometric Synthetic Aperture Radar methods using Sentinel-1 SAR data from 2015 to 2019 (four years). Results were compared with rainfall data, historical ground investigation records and monitoring surveys carried out at Ventnor to relate observations to geology, geomorphology and rainfall. Decomposition of InSAR viewing geometries to vertical and horizontal aligned well with previous ground-based studies. Subsidence of −9.8 mm a−1 at the Lowtherville Graben and heave of +8.5 mm a−1 along the coastline south of Ventnor Park were observed. Decomposition to east-west geometry results showed an eastward displacement of approximately 12.4 mm a−1 along the coastline south of Ventnor Park, and a westward displacement of −3.7 mm a−1 throughout built up sections of Ventnor town, indicating the landslide was displacing more in an eastern direction than vertically. The cause of this movement was investigated by using publicly available intrusive boreholes paired with Persistent Scatterer Interferometry, and a new ground model spanning east-west parallel to the coastline was presented. No evidence of significant ground movement was observed along heavily protected sections of the coastline, suggesting coastal defences comprised of concrete aprons and rip rap appear to be an effective coastal management/landslide stabilisation tool when compared to rip rap alone. The mechanism of this increased stability is likely due to the combination of toe weighting and reduced toe erosion. A lag of approximately 13–20 days was observed between high rainfall events and subsequent peaks in ground displacement, which was shorter than a 29 day lag observed in a previous study. Similar observations of prolonged rainfall resulting in prolonged displacements were also observed. The study demonstrates the capabilities of the PSI methodology in identifying the same ground movements that conventional methods provide. By providing detailed analysis of ground deformation of the Ventnor landslide, we demonstrate small ground movements, validated with existing ground movement surveys. Similar methodology can be applied to coastal landslides in urban environments worldwide, providing a relatively cheap and rapid resource for coastal landslide monitoring. View Full-Text
Keywords: InSAR; coastal monitoring; persistent scatterer interferometry; landslides; earth observation; coastal processes; coastal engineering InSAR; coastal monitoring; persistent scatterer interferometry; landslides; earth observation; coastal processes; coastal engineering
►▼ Show Figures 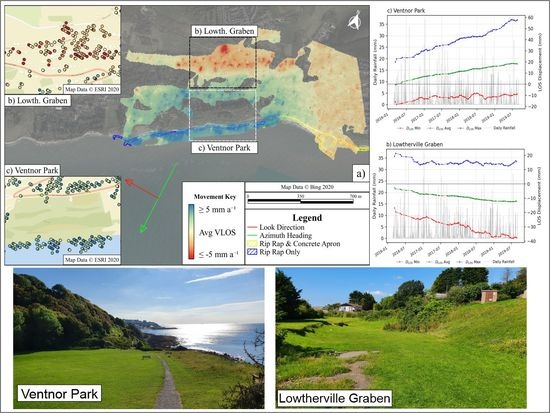