The Function of Remote Sensing in Support of Environmental Policy

Wetlands in West Africa are among the most vulnerable ecosystems to climate change. West African wetlands are often freshwater transfer mechanisms from wetter climate regions to dryer areas, providing an array of ecosystem services and functions. Often wetland-specific data in Africa is only available on a per country basis or as point data. Since wetlands are challenging to map, their accuracies are not well considered in global land cover products. In this paper we describe a methodology to map wetlands using well-corrected 250-meter MODIS time-series data for the year 2002 and over a 360,000 km2 large study area in western Burkina Faso and southern Mali (West Africa). A MODIS-based spectral index table is used to map basic wetland morphology classes. The index uses the wet season near infrared (NIR) metrics as a surrogate for flooding, as a function of the dry season chlorophyll activity metrics (as NDVI). Topographic features such as sinks and streamline areas were used to mask areas where wetlands can potentially occur, and minimize spectral confusion. 30-m Landsat trajectories from the same year, over two reference sites, were used for accuracy assessment, which considered the area-proportion of each class mapped in Landsat for every MODIS cell. We were able to map a total of five wetland categories. Aerial extend of all mapped wetlands (class “Wetland”) is 9,350 km2, corresponding to 4.3% of the total study area size. The classes “No wetland”/“Wetland” could be separated with very high certainty; the overall agreement (KHAT) was 84.2% (0.67) and 97.9% (0.59) for the two reference sites, respectively. The methodology described herein can be employed to render wide area base line information on wetland distributions in semi-arid West Africa, as a data-scarce region. The results can provide (spatially) interoperable information feeds for inter-zonal as well as local scale water assessments. View Full-Text
Keywords: wetland mapping; MODIS time-series; Landsat; land cover; class homogeneity; West Africa wetland mapping; MODIS time-series; Landsat; land cover; class homogeneity; West Africa
►▼ Show Figures 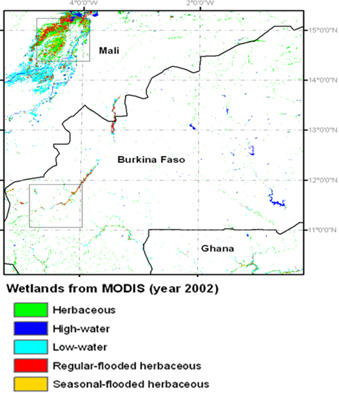