Net primary productivity (NPP) can indicate vegetation ecosystem services ability and reflect variation response to climate change and human activities. This study applied MODIS-1 km NPP products to investigate the NPP variation from 2001 to 2006, a fast urban expansion and adjustment period in Guangzhou, China, and quantify the impacts of weather and land use/land cover (LULC) changes, respectively. The results showed that the NPP mean value increased at a rate of 11.6 g∙C∙m−2∙yr−1 during the initial three years and decreased at an accelerated rate of 31.0 g∙C∙m−2∙yr−1 during the final three years, resulting in a total NPP loss of approximately 167 × 106 g∙C. The spatiotemporal of NPP varied obviously in the central area, suburb and exurb of Guangzhou driven by three patterns of weather and LULC changes. By the interactive effects and the weather variation dominated effects, NPP of most areas changed slightly with dynamic index less than 5% of NPP mean value in the central area and the suburb. The LULC change dominated effects caused obvious NPP reduction, by more than 15% of the NPP mean value, which occurred in some areas of the suburb and extended to the exurb with the outward urban sprawl. Importantly, conversion from wood grassland, shrublands and even forests to croplands occupied by urban landscapes proved to be a main process in the conversion from high-NPP coverage to low-NPP coverage, thereby leading to the rapid degradation of urban carbon stock capacity in urban fringe areas. It is helpful for government to monitor urban ecological health and safety and make relevant policies. View Full-Text
Keywords: NPP; spatiotemporal pattern; weather variation; LULC change; effects NPP; spatiotemporal pattern; weather variation; LULC change; effects
►▼ Show Figures 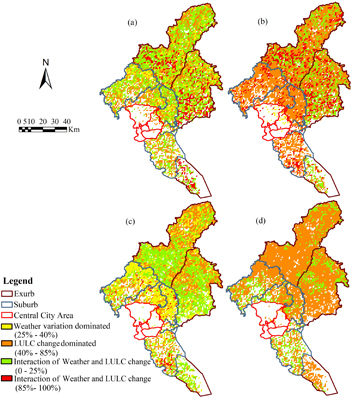