Contraction of the Gobi Desert, 2000–2012
Previous Article in Journal

Mapping Surface Broadband Albedo from Satellite Observations: A Review of Literatures on Algorithms and Products
Previous Article in Special Issue

Drought is a complex natural hazard which can have negative effects on agriculture, economy, and human life. In this paper, the primary goal is to explore the application of the Gravity Recovery and Climate Experiment (GRACE) gravity satellite data for the quantitative investigation of the recent drought dynamic over the arid land of northwestern China, a region with scarce hydrological and meteorological observation datasets. The spatiotemporal characteristics of terrestrial water storage changes (TWSC) were first evaluated based on the GRACE satellite data, and then validated against hydrological model simulations and precipitation data. A drought index, the total storage deficit index (TSDI), was derived on the basis of GRACE-recovered TWSC. The spatiotemporal distributions of drought events from 2003 to 2012 in the study region were obtained using the GRACE-derived TSDI. Results derived from TSDI time series indicated that, apart from four short-term (three months) drought events, the study region experienced a severe long-term drought from May 2008 to December 2009. As shown in the spatial distribution of TSDI-derived drought conditions, this long-term drought mainly concentrated in the northwestern area of the entire region, where the terrestrial water storage was in heavy deficit. These drought characteristics, which were detected by TSDI, were consistent with local news reports and other researchers’ results. Furthermore, a comparison between TSDI and Standardized Precipitation Index (SPI) implied that GRACE TSDI was a more reliable integrated drought indicator (monitoring agricultural and hydrological drought) in terms of considering total terrestrial water storages for large regions. The GRACE-derived TSDI can therefore be used to characterize and monitor large-scale droughts in the arid regions, being of special value for areas with scarce observations. View Full-Text
Keywords: GRACE gravity satellite; terrestrial water storage; TSDI; drought; arid region GRACE gravity satellite; terrestrial water storage; TSDI; drought; arid region
►▼ Show Figures 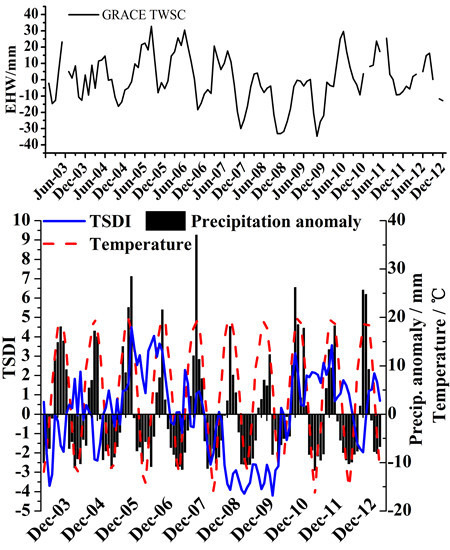