The Tasks of the Crowd: A Typology of Tasks in Geographic Information Crowdsourcing and a Case Study in Humanitarian Mapping

Urban area expansion is one of the most critical types of worldwide change, and most urban areas are experiencing increased growth in population and infrastructure development. Urban change leads to many changes in the daily activities of people living within an affected area. Many studies have suggested that urbanization and crime are related. However, they focused particularly on land uses, types of land use, and urban forms, such as the physical features of neighbourhoods, roads, shopping centres, and bus stations. Understanding the correlation between urban area expansion and crime is very important for criminologists and urban planning decision-makers. In this study, we have used satellite images to measure urban expansion over a 10-year period and tested the correlations between these expansions and the number of criminal activities within these specific areas. The results show that there is a measurable relationship between urban expansion and criminal activities. Our findings support the crime opportunity theory as one possibility, which suggests that population density and crime are conceptually related. We found the correlations are stronger where there has been greater urban growth. Many other factors that may affect crime rate are not included in this paper, such as information on the spatial details of the population, city planning, economic considerations, the distance from the city centre, neighbourhood quality, and police numbers. However, this study will be of particular interest to those who aim to use remote sensing to study patterns of crime. View Full-Text
Keywords: crime; remote sensing; land use; urban; urbanization; expansion crime; remote sensing; land use; urban; urbanization; expansion
►▼ Show Figures 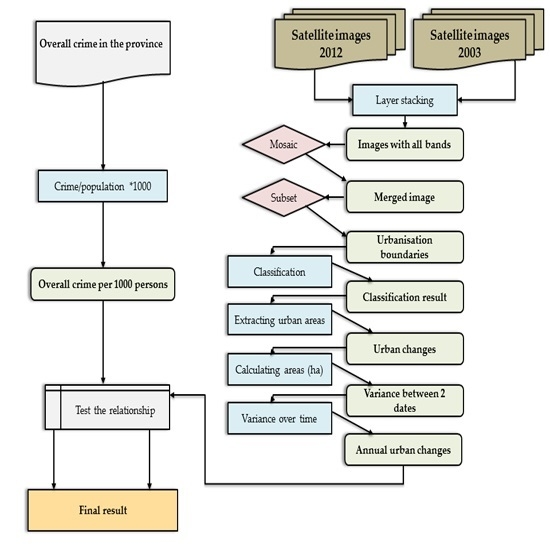