Land cover mapping (LCM) in complex surface-mined and agricultural landscapes could contribute greatly to regulating mine exploitation and protecting mine geo-environments. However, there are some special and spectrally similar land covers in these landscapes which increase the difficulty in LCM when employing high spatial resolution images. There is currently no research on these mixed complex landscapes. The present study focused on LCM in such a mixed complex landscape located in Wuhan City, China. A procedure combining ZiYuan-3 (ZY-3) stereo satellite imagery, the feature selection (FS) method, and machine learning algorithms (MLAs) (random forest, RF; support vector machine, SVM; artificial neural network, ANN) was proposed and first examined for both LCM of surface-mined and agricultural landscapes (MSMAL) and classification of surface-mined land (CSML), respectively. The mean and standard deviation filters of spectral bands and topographic features derived from ZY-3 stereo images were newly introduced. Comparisons of three MLAs, including their sensitivities to FS and whether FS resulted in significant influences, were conducted for the first time in the present study. The following conclusions are drawn. Textures were of little use, and the novel features contributed to improve classification accuracy. Regarding the influence of FS: FS substantially reduced feature set (by 68% for MSMAL and 87% for CSML), and often improved classification accuracies (with an average value of 4.48% for MSMAL using three MLAs, and 11.39% for CSML using RF and SVM); FS showed statistically significant improvements except for ANN-based MSMAL; SVM was most sensitive to FS, followed by ANN and RF. Regarding comparisons of MLAs: for MSMAL based on feature subset, RF achieved the greatest overall accuracy of 77.57%, followed by SVM and ANN; for CSML, SVM had the highest accuracies (87.34%), followed by RF and ANN; based on the feature subsets, significant differences were observed for MSMAL and CSML using any pair of MLAs. In general, the proposed approach can contribute to LCM in complex surface-mined and agricultural landscapes. View Full-Text
Keywords: remote sensing; land cover; ZiYuan-3 stereo satellite; machine learning algorithms; complex landscape; surface mining; agricultural landscape; feature selection remote sensing; land cover; ZiYuan-3 stereo satellite; machine learning algorithms; complex landscape; surface mining; agricultural landscape; feature selection
►▼ Show Figures 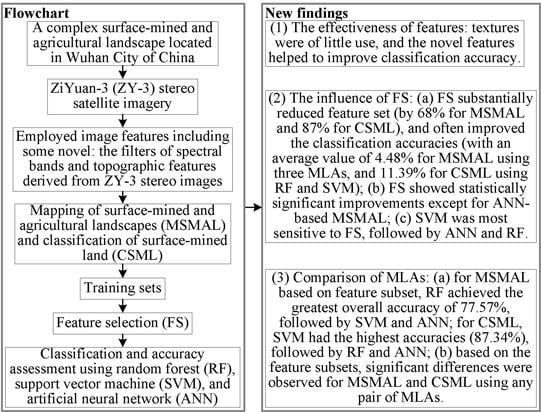