This study investigated whether the association between postprandial plasma glucose (PPG) is affected by five type 2 diabetes mellitus (T2DM) susceptibility genes, and whether four weeks of yogurt consumption would affect these responses. We performed a single-arm intervention study in young nondiabetic Japanese participants, who consumed 150 g yogurt daily for four weeks, after which a rice test meal containing 50 g carbohydrate was administered. PPG and postprandial serum insulin (PSI) were measured between 0 and 120 mins at baseline and after the intervention. Genetic risk was evaluated by weighted genetic risk score (GRS) according to published methodology, and participants were assigned to one of two groups (n = 17: L-GRS group and n = 15: H-GRS group) according to the median of weighted GRS. At baseline, the H-GRS group had higher glucose area under the curve0–120 min after intake of the test meal than the L-GRS group (2175 ± 248 mg/dL.min vs. 1348 ± 199 mg/dL.min, p < 0.001), but there were no significant differences after the yogurt intervention. However, there was an improvement in PSI in the H-GRS group compared with baseline. These results suggest that habitual yogurt consumption may improve glucose and insulin responses in nondiabetic subjects who have genetically higher PPG. View Full-Text
Keywords: type 2 diabetes susceptibility gene; genetic risk score; yogurt; postprandial plasma glucose; insulin sensitivity type 2 diabetes susceptibility gene; genetic risk score; yogurt; postprandial plasma glucose; insulin sensitivity
►▼ Show Figures 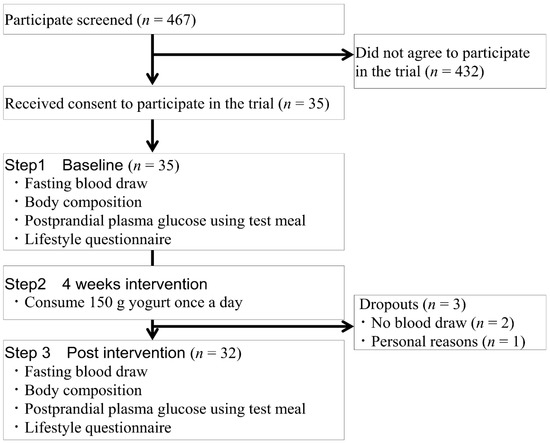