Cognitive Functioning of Geriatric Patients: Is Hypovitaminosis D the Next Marker of Cognitive Dysfunction and Dementia?

Effects of Different Doses of Fructooligosaccharides (FOS) on the Composition of Mice Fecal Microbiota, Especially the Bifidobacterium Composition

Fructooligosaccharides (FOS) are a well-known class of prebiotic and are considered to selectively stimulate the growth of bifidobacteria in the gut. Previous studies focused on the growth stimulation of Bifidobacterium, but they did not further investigate the bifidobacterial composition and the specific species that were stimulated. In this study, mice were fed with FOS in different doses for four weeks and the composition of fecal microbiota, in particular Bifidobacterium, was analyzed by sequencing the V3–V4 region and the groEL gene on the MiSeq platform, respectively. In the high-dose group, the relative abundance of Actinobacteria was significantly increased, which was mainly contributed by Bifidobacterium. At the genus level, the relative abundances of Blautia and Coprococcus were also significantly increased. Through the groEL sequencing, 14 species of Bifidobacterium were identified, among which B. pseudolongum was most abundant. After FOS treatment, B. pseudolongum became almost the sole bifidobacterial species (>95%). B. pseudolongum strains were isolated and demonstrated their ability to metabolize FOS by high performance liquid chromatography (HPLC). Therefore, we inferred that FOS significantly stimulated the growth of B. pseudolongum in mice. Further investigations are needed to reveal the mechanism of selectiveness between FOS and B. pseudolongum, which would aid our understanding of the basic principles between dietary carbohydrates and host health. View Full-Text
Keywords: Fructooligosaccharides; 16S rDNA metagenomic sequencing; intestinal microbiota; Bifidobacterium pseudolongum Fructooligosaccharides; 16S rDNA metagenomic sequencing; intestinal microbiota; Bifidobacterium pseudolongum
►▼ Show Figures 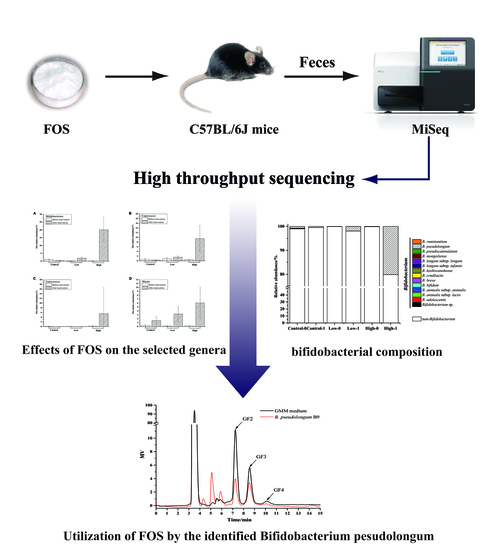