Quantification of Human Milk Phospholipids: the Effect of Gestational and Lactational Age on Phospholipid Composition
Previous Article in Special Issue

Long-Term Impact of Neonatal Intake of Oleanolic Acid on the Expression of AMP-Activated Protein Kinase, Adiponectin and Inflammatory Cytokines in Rats Fed with a High Fructose Diet

AMP-activated protein kinase (AMPK) is known to regulate both glucose and lipid metabolism, which play vital roles in the development of metabolic syndrome. One way of regulating AMPK is through hormonal activation using adiponectin. Patients diagnosed with type-2 diabetes (T2D) and obesity exhibit low adiponectin concentration levels in their blood. Moreover, studies have also shown that inflammatory processes play a significant role in the etiology of these metabolic diseases. In this study, the long-term effects of neonatal intake of oleanolic acid (OA) on the AMPK gene, genes associated with glucose transport and lipid metabolism, adiponectin levels, and inflammatory biomarkers in rats fed with a high fructose diet were investigated. Seven day old pups were randomly divided into five groups and treated as follows; 0.5% dimethylsulphoxide v/v in distilled water vehicle control (CON), oleanolic acid (OA, 60 mg/kg), high fructose diet (HF, 20% w/v), high fructose diet combined with oleanolic acid (HF+OA), and high fructose diet combined with metformin (HF+MET, 500 mg/kg). The treatments were administered once daily until day 14. The rats were then weaned at day 21 and fed standard rat chow and had ad libitum access to plain drinking water until day 112. The quantitative polymerase chain reaction (qPCR) was used to analyze the gene expressions of AMPK, Glut-4, Cpt-1, AdipoR1, AdipoR2, TNF-α, and IL-6 in the skeletal muscles. Bio-Plex Pro magnetic bead-based assay was used to measure plasma levels of inflammatory markers (TNF-α, IL-6, VEGF, and MCP-1) while ELISA kits were used to measure adiponectin concentration in blood plasma. The results obtained in this study showed that neonatal supplementation with OA significantly increased AMPK gene expression approximately ~4-fold in OA fed rats compared to those that were fed with HF alone. In addition, glut-4 gene expression was also significantly higher in the OA treatment group compared to all the other experimental groups except the CON group whereas Cpt-1 gene was more expressed when OA was administered alone. Together, these results indicated that OA can play a role in glucose and lipid metabolism gene regulation. Furthermore, the results showed that the OA group had ~1.5-fold increase in adiponectin concentration when comparedto the HF group. Moreover, HF increased levels of inflammatory cytokines, which was attenuated by neonatal administration of OA. Plasma concentration and gene expression in the skeletal muscle for TNF-α and IL-6 were significantly increased in rats that were treated with HF alone when compared to all the other groups. On the contrary, the high levels of TNF-α and IL-6 were reduced when OA was administered. These findings suggest that intake of oleanolic acid during the neonatal stage of development could be a potential strategic intervention for the long-term prevention of metabolic diseases such as T2D and obesity. View Full-Text
Keywords: type-2 diabetes; obesity; oleanolic acid; metabolic syndrome; high fructose diet; AMPK; adiponectin; inflammatory cytokines type-2 diabetes; obesity; oleanolic acid; metabolic syndrome; high fructose diet; AMPK; adiponectin; inflammatory cytokines
►▼ Show Figures 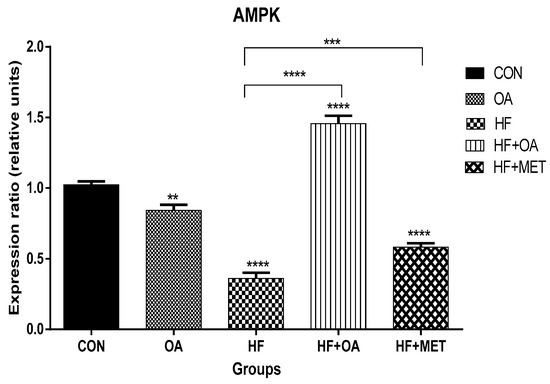