Alzheimer’s disease (AD) is an irreversible neurodegenerative disorder characterized by progressive impairment of cognitive functions. Beta-site amyloid precursor protein cleaving enzyme1 (BACE1) is essential for the formation of β-amyloid peptide (Aβ), a major constituent of amyloid plaques that represent a neuropathological hallmark of this disorder. To find alternative therapies for AD sourced from natural products, the present study focused on three flavonoids from Boesenbergia rotunda, namely, cardamonin, pinocembrin, and pinostrobin. Biological evaluation showed that cardamonin presented the strongest BACE1 inhibition, with an The half maximal inhibitory concentration (IC50) value of 4.35 ± 0.38 µM, followed by pinocembrin and pinostrobin with 27.01 ± 2.12 and 28.44 ± 1.96 µM, respectively. Kinetic studies indicated that the inhibitory constants (Ki) for cardamonin, pinocembrin, and pinostrobin against BACE1 were 5.1, 29.3, and 30.9 µM, respectively. Molecular docking studies showed that the tested compounds did not bind to the BACE1 active site, consistent with the biological results, illustrating non-competitive inhibitory activity for all three compounds. In addition, the lowest binding energy of the most proposed complexes of cardamonin, pinocembrin, and pinostrobin with BACE1 were −9.5, −7.9, and −7.6 kcal/mol, respectively. Overall, we provide the first evidence that these flavonoids from B. rotunda may be considered as promising AD preventative agents through inhibition of Aβ formation. View Full-Text
Keywords: Alzheimer’s disease; Aβ; BACE1; in silico docking; Boesenbergia rotunda Alzheimer’s disease; Aβ; BACE1; in silico docking; Boesenbergia rotunda
►▼ Show Figures 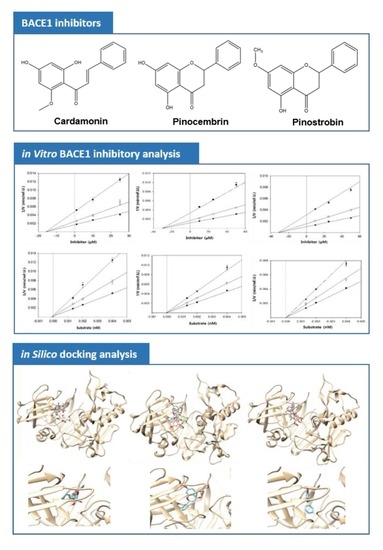