Vitamin D and the Risk of Depression: A Causal Relationship? Findings from a Mendelian Randomization Study

The purpose of this work was to describe changes in metabolic activity in the bones of young male competitive cyclists (CYC) as compared with age-matched controls (CON) over a one-year period of study. Eight adolescent male cyclists aged between fourteen and twenty, and eight age-matched controls participated in this longitudinal study. Serum osteocalcin (OC), amino-terminal propeptide of type I procollagen (PINP), beta-isomerized C-telopeptides (β-CTx) and plasma 25 hydroxyvitamin D [25(OH)D], were investigated by an electrogenerated chemiluminescence immunoassay. Analysis of variance revealed no significant differences in formation and resorption markers between cyclists and controls. Within the groups, both CYC and CON showed decreased OC at −30% and −24%, respectively, and PINP where the figures were −28% and −30% respectively (all p < 0.05). However, only the CYC group showed a decrease in [25(OH)D], lower by 11% (p < 0.05). The similarity in the concentrations of markers in cyclists and controls seems to indicate that cycling does not modify the process of bone remodeling. The decrease in vitamin D in cyclists might be detrimental to their future bone health. View Full-Text
Keywords: cyclists; adolescence; bone turnover; osteocalcin; vitamin D cyclists; adolescence; bone turnover; osteocalcin; vitamin D
►▼ Show Figures 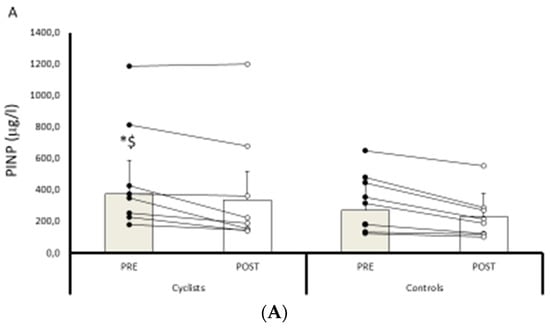