Endothelial Function is improved by Inducing Microbial Polyamine Production in the Gut: A Randomized Placebo-Controlled Trial

Recently, it was demonstrated that spermidine-induced autophagy reduces the risk of cardiovascular disease in mice. Intestinal bacteria are a major source of polyamines, including spermidine. We previously reported that the intake of both Bifidobacterium animalis subsp. lactis (Bifal) and arginine (Arg) increases the production of putrescine, a spermidine precursor, in the gut. Here, we investigated the effects of Bifal and Arg consumption on endothelial function in healthy subjects. Healthy individuals with body mass index (BMI) near the maximum value in the “healthy” range (BMI: 25) (n = 44) were provided normal yogurt containing Bifal and Arg (Bifal + Arg YG) or placebo (normal yogurt) for 12 weeks in this randomized, double-blinded, placebo-controlled, parallel-group comparative study. The reactive hyperemia index (RHI), the primary outcome, was measured using endo-peripheral arterial tone (EndoPAT). The change in RHI from week 0 to 12 in the Bifal + Arg YG group was significantly higher than that in the placebo group, indicating that Bifal + Arg YG intake improved endothelial function. At week 12, the concentrations of fecal putrescine and serum putrescine and spermidine in the Bifal + Arg YG group were significantly higher than those in the placebo group. This study suggests that consuming Bifal + Arg YG prevents or reduces the risk of atherosclerosis. View Full-Text
Keywords: Bifidobacterium animalis subsp. lactis; arginine; putrescine; spermidine; endothelial function; intestinal microbiome; autophagy Bifidobacterium animalis subsp. lactis; arginine; putrescine; spermidine; endothelial function; intestinal microbiome; autophagy
►▼ Show Figures 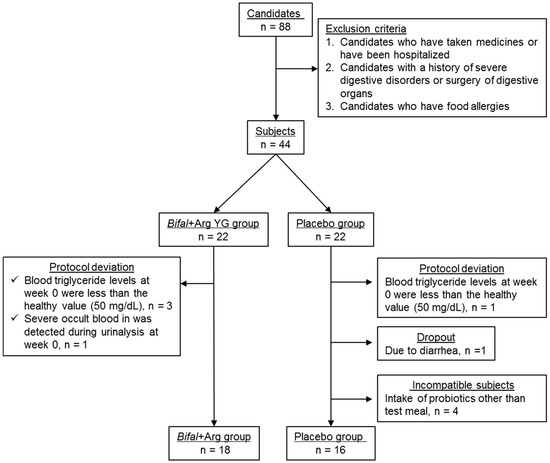