Bitter taste receptors (T2Rs) are expressed in several tissues of the body and are involved in a variety of roles apart from bitter taste perception. Advanced glycation end-products (AGEs) are produced by glycation of amino acids in proteins. There are varying sources of AGEs, including dietary food products, as well as endogenous reactions within our body. Whether these AGEs are T2R ligands remains to be characterized. In this study, we selected two AGEs, namely, glyoxal-derived lysine dimer (GOLD) and carboxymethyllysine (CML), based on their predicted interaction with the well-studied T2R4, and its physiochemical properties. Results showed predicted binding affinities (Kd) for GOLD and CML towards T2R4 in the nM and μM range, respectively. Calcium mobilization assays showed that GOLD inhibited quinine activation of T2R4 with IC50 10.52 ± 4.7 μM, whilst CML was less effective with IC50 32.62 ± 9.5 μM. To characterize whether this antagonism was specific to quinine activated T2R4 or applicable to other T2Rs, we selected T2R14 and T2R20, which are expressed at significant levels in different human tissues. A similar effect of GOLD was observed with T2R14; and in contrast, GOLD and CML activated T2R20 with an EC50 of 79.35 ± 29.16 μM and 65.31 ± 17.79 μM, respectively. In this study, we identified AGEs as novel T2R ligands that caused either activation or inhibition of different T2Rs. View Full-Text
Keywords: bitter taste receptor; advanced glycation end-products; bitter blockers; GPCR; calcium mobilization bitter taste receptor; advanced glycation end-products; bitter blockers; GPCR; calcium mobilization
►▼ Show Figures 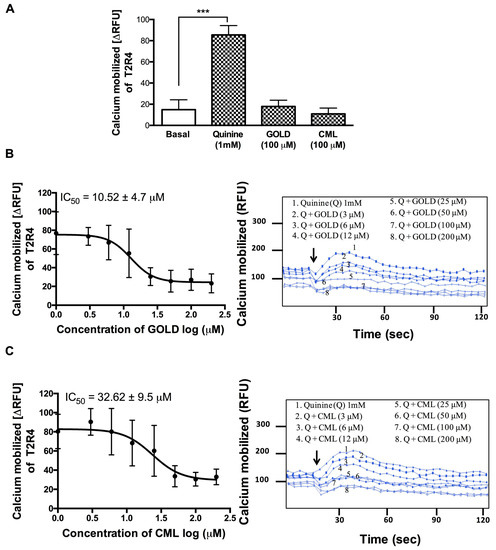