Non-Alcoholic Fatty Liver Disease Is Associated with Higher Metabolic Expenditure in Overweight and Obese Subjects: A Case-Control Study
Next Article in Special Issue

Oleacein is one of the most abundant polyphenolic compounds of olive oil, which has been shown to play a protective role against several metabolic abnormalities, including dyslipidemia, insulin resistance, and glucose intolerance. Herein, we investigated the effects of oleacein on certain markers of adipogenesis and insulin-resistance in vitro, in 3T3-L1 adipocytes, and in vivo in high-fat diet (HFD)-fed mice. During the differentiation process of 3T3-L1 preadipocytes into adipocytes, oleacein strongly inhibited lipid accumulation, and decreased protein levels of peroxisome proliferator-activated receptor gamma (PPARγ) and fatty acid synthase (FAS), while increasing Adiponectin levels. In vivo, treatment with oleacein of C57BL/6JOlaHsd mice fed with HFD for 5 and 13 weeks prevented the increase in adipocyte size and reduced the inflammatory infiltration of macrophages and lymphocytes in adipose tissue. These effects were accompanied by changes in the expression of adipose tissue-specific regulatory elements such as PPARγ, FAS, sterol regulatory element-binding transcription factor-1 (SREBP-1), and Adiponectin, while the expression of insulin-sensitive muscle/fat glucose transporter Glut-4 was restored in HFD-fed mice treated with oleacein. Collectively, our findings indicate that protection against HFD-induced adiposity by oleacein in mice is mediated by the modulation of regulators of adipogenesis. Protection against HFD-induced obesity is effective in improving peripheral insulin sensitivity. View Full-Text
Keywords: oleacein; high-fat diet; obesity; abdominal fat; adipogenesis; Glut-4 oleacein; high-fat diet; obesity; abdominal fat; adipogenesis; Glut-4
►▼ Show Figures 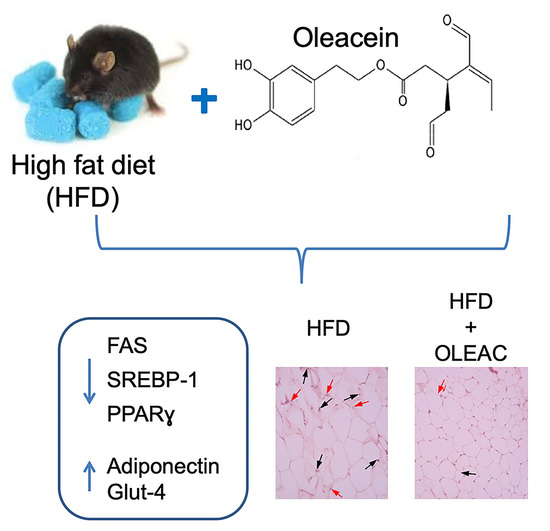