Submit to Nutrients Review for Nutrients 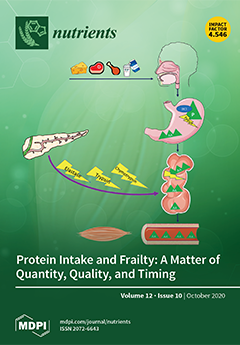 Cover Story (view full-size image): An adequate protein consumption is advocated as a possible intervention for the management of frailty in older adults due to its effects on muscle mass and physical function. However, empirical evidence is still needed to support this proposition. On the other hand, substantial evidence from observational studies has provided important information on the association between frailty and dietary protein-related parameters. Here, we provide a narrative review of the current literature regarding the association between protein intake (amount (how much?), quality (what type?), and distribution across meals (when?)) and frailty-related parameters. The ultimate aim of this work is to offer practical, evidence-based indications to healthcare professionals responsible for the care of frail older adults. View this paper
Previous Issue
Volume 12, September
Next Issue
Volume 12, November
We use cookies on our website to ensure you get the best experience. Read more about our cookies here.
Accept
We have just recently launched a new version of our website. Help us to further improve by taking part in this short 5 minute survey here. here.
Never show this again