An Update on Omega-3 Polyunsaturated Fatty Acids and Cardiovascular Health

Under the National Health Promotion Act, the KNHANES, a Korean nationwide representative cross-sectional survey, has been conducted since 1998 to evaluate and monitor the nutritional and health status of Koreans living in Korea by the Korea Disease Control and Prevention Agency (KDCA). The KNHANES collects information by staged, stratified, clustered, and systematic probability sampling based on sex, age, and geographic area using household registries to be representative of the whole Korean population residing in Korea. Up to the present, the KNHANES has been administered in seven phases: KNHANES phases I (1998), II (2001), III (2005), IV (2007–2009), V (2010–2012), VI (2013–2015), and VII (2016–2018). Among these, we first chose data from KNHANES 2018 (the most recent) to provide up-to-date health statistics. However, the range of data needed to date back to 2015 (the oldest survey that includes hsCRP values) to achieve statistical power, which is inevitably decreased by exclusion criteria for selection of healthy older adults.
The KNHANES consists of three components: a health interview, a health examination, and a nutrition survey. Trained staff including physicians conduct health interviews and health examinations at mobile examination centers, and nutrition surveys are followed up by dieticians’ visits to the homes of participants [8,9]. Through these processes, the KNHANES gathers information from respondents regarding health status, health behaviors, socioeconomic status, laboratory test results, and nutritional status.
Using the dataset from 2015 to 2018, to investigate the association between ω3FA intake and subclinical inflammation in healthy older adults (removing the potential for increased C-reactive protein (CRP) level due to other causes), we excluded participants with hsCRP level over 10 mg/L, which is the value suggesting the presence of acute inflammation [1,10,11]. In addition, participants with histories of any malignancy or other chronic morbidities such as diabetes mellitus, coronary heart disease, renal failure, and severe rheumatoid arthritis were excluded. Lastly, we excluded participants younger than 60 years. A total of 4804 participants (2028 men and 2776 women) was included and analyzed in the final study (Figure 1).

2.3. Definitions of Other Variables

Sufficient physical activity was defined as engaging in moderate physical activity for a total period of more than 150 min per week or engaging in vigorous physical activity for a total period of more than 75 min per week. Men who reported drinking more than seven alcoholic beverages and women who reported drinking more than five alcoholic beverages more than twice a week were designated as heavy alcohol drinkers [12]. Occupation was categorized into three groups of (1) manual workers (clerks; service and sales workers; skilled agricultural, forestry, and fishery workers; persons who operate or assemble crafts, equipment, or machines; and elementary workers), (2) office workers (general managers, government administrators, professionals, and simple office workers), and (3) other (unemployed persons, housekeepers, and students). Educational status was classified into four groups by total years of education: <6 years, 6–<9 years, 9–<12 years, and ≥12 years of education. Marital status was divided into two categories of (1) married and not separated (referring to people who were married and living together without separation) and (2) single people who were unmarried, separated, divorced, or widowed. Blood pressure (BP) was measured three times in subjects using a standard mercury sphygmomanometer (Baumanometer; Baum Co., Inc., Copiague, NY, USA), and a mean value of the last two measurements was defined as the BP of subjects. Aspartate transaminase (AST), total cholesterol, and glucose were measured by the International Federation of Clinical Chemistry (IFCC) techniques without pyridoxal-5-phosphate (P5P), an enzymatic method, and hexokinase ultraviolet, respectively (Hitachi 7600 Automatic Analyzer; Hitachi, Ltd., Tokyo, Japan). High-sensitivity C-reactive protein (hsCRP) values were measured by immunoturbidimetry (Cobas analyzer; F. Hoffmann-La Roche Ltd., Basel, Switzerland). When the hsCRP value from 2016 to 2018 was greater or less than the detection range (0.00–20.00 mg/L in 2016, 0.15–20.00 mg/L in 2017 and 2018), we estimated the value at 20.01 or 0.14 mg/L based on guidelines adopted in the 2015 KNHANES.

Daily nutrient intake was assessed using the 24 h recall method, which was conducted by trained dietitians. After all participants were instructed to maintain their usual dietary habits before the nutrition survey, they were asked to recall the foods and amounts that they had consumed in the last 24 h. Final daily intake of nutrient was calculated from the information recorded on the Food Intake Questionnaire by eye measurement, using the CAN-Pro nutrient intake assessment software program developed by the Korean Nutrition Society.

This study shows that increased ω3FA-ratio-based intake is associated with decreased subclinical inflammation in apparently healthy elderly males. However, longitudinally designed cohort studies or interventional studies are further needed to confirm whether the higher ratio of ω3FA intake to daily calorie consumption decreases subclinical inflammation in healthy older adults to result in the prevention of cardiovascular events.

This work was supported by Korea Institute of Planning and Evaluation for Technology in Food, Agriculture and Forestry (IPET) through its future innovative food technology development program, funded by Ministry of Agriculture, Food and Rural Affairs (MAFRA) (grant number: IPET319045032HD060).

The Korean National Health and Nutrition Examination Survey (KNHANES) was conducted according to the guidelines of the Declaration of Helsinki, and approved by the Institutional Review Board (IRB) of the Korea Disease Control and Prevention Agency (KDCA) (IRB Approval number: 2018-01-03-P-A). The KNHANES from 2015 to 2017 was exempt from review by the IRB of KDCA based on the Bioethics Act Article 2 and Enforcement Regulation Article 2-2 [35].

All surveys were conducted after obtaining the participants’ written informed consent.

For purposes of academic research, data from the Korean National Health and Nutrition Examination Survey (KNHANES) are available at no cost on the KNHANES website (http://knhanes.cdc.go.kr). 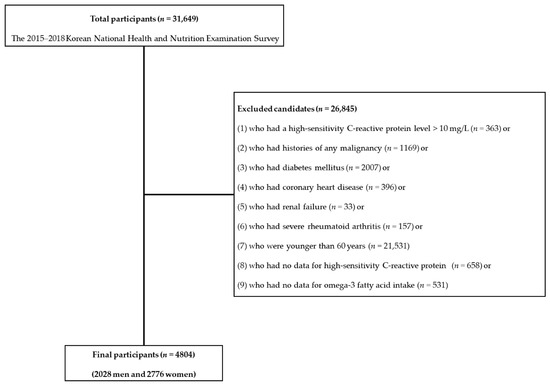 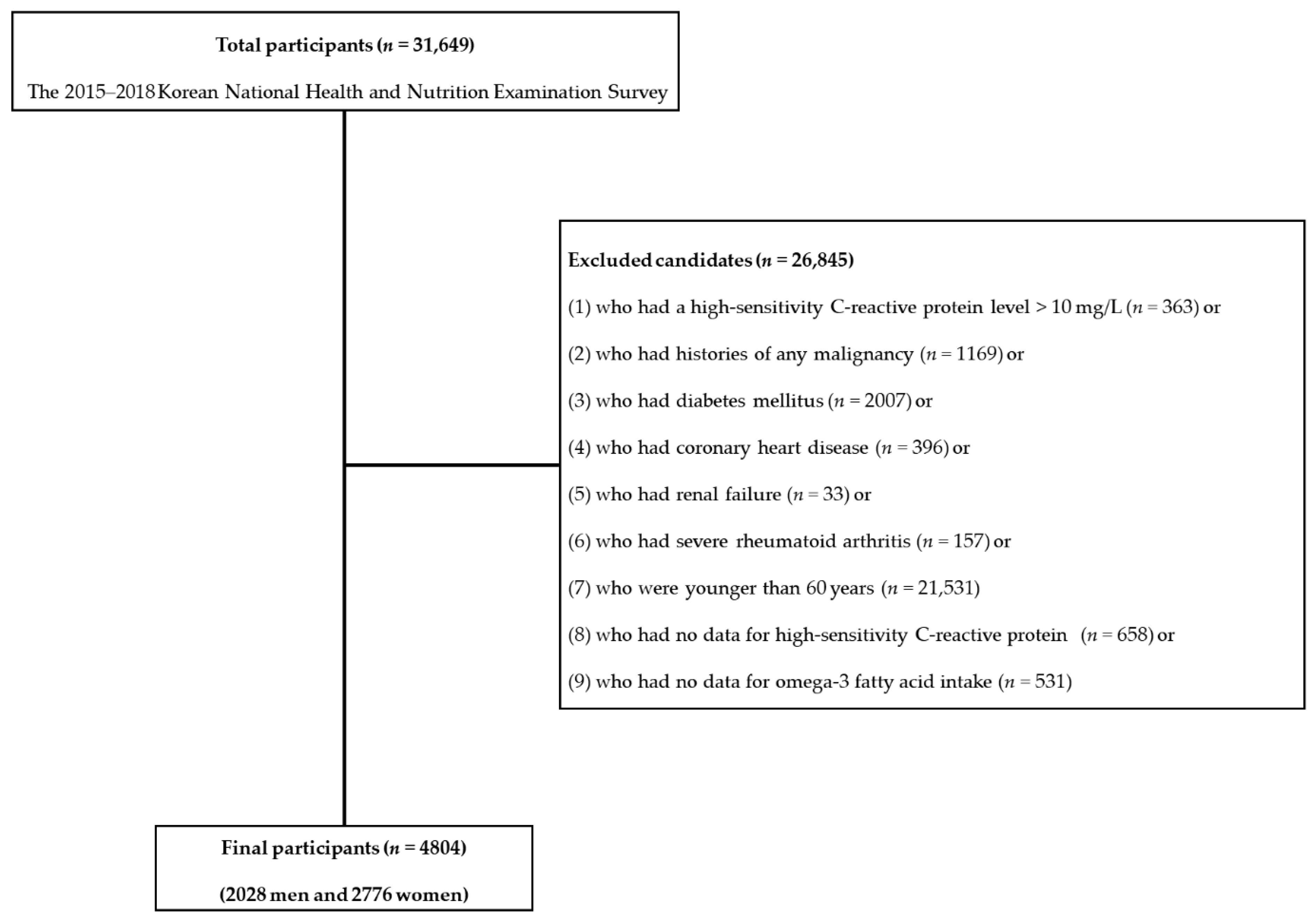 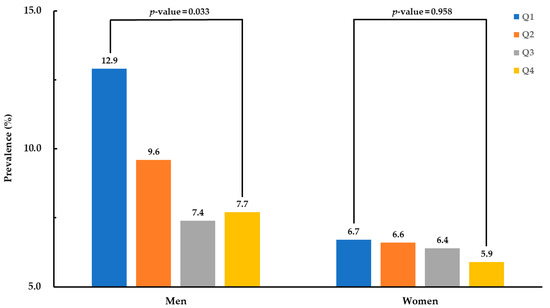 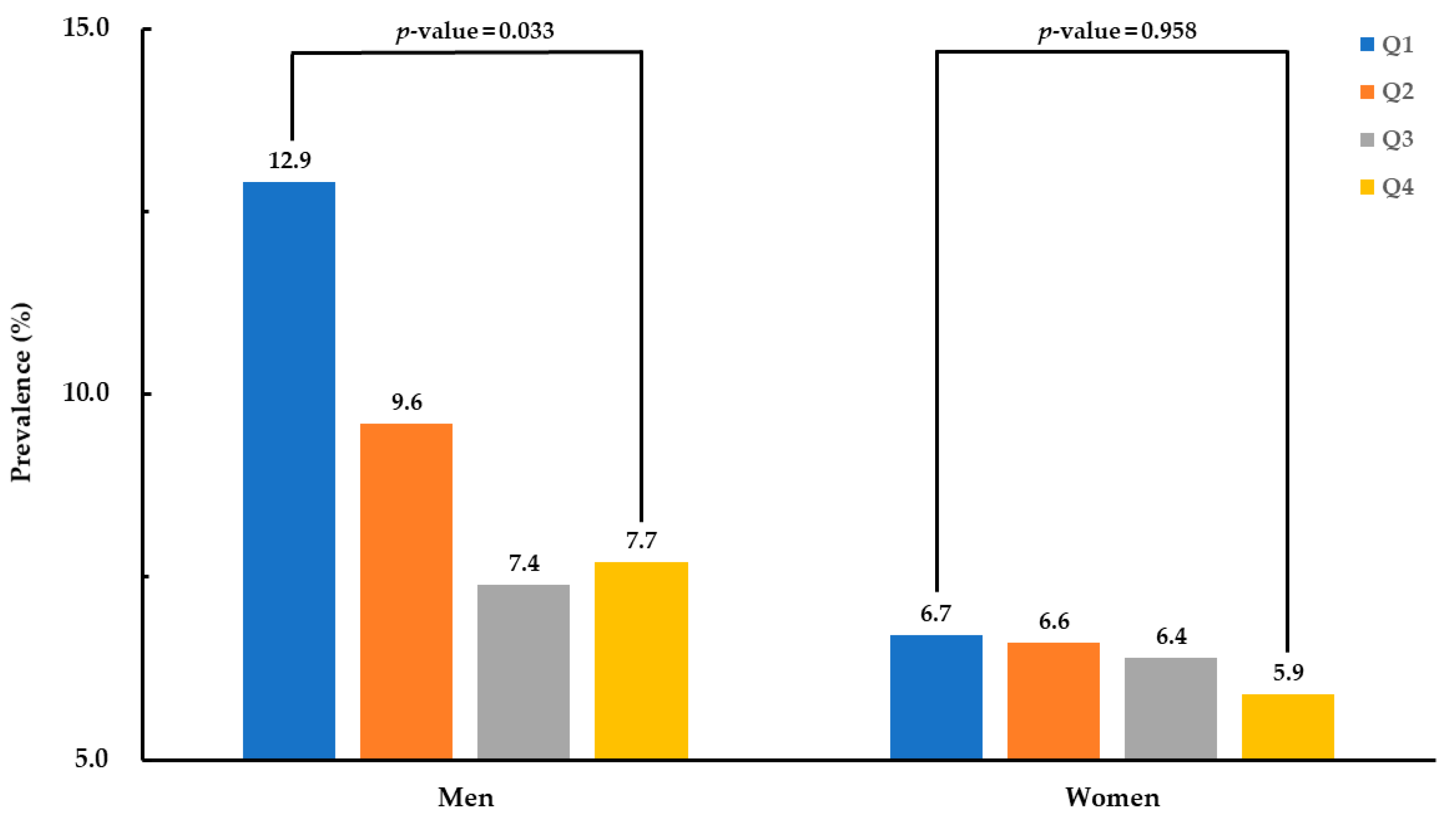